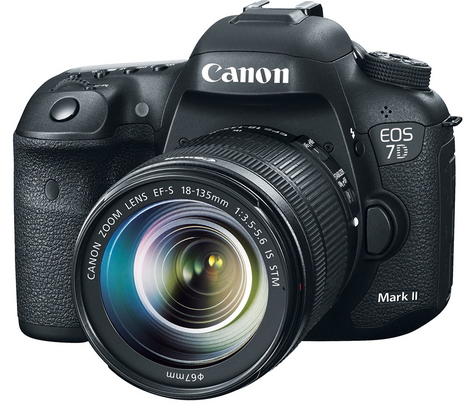 Canon has finally announced a successor to its beloved EOS 7D. The EOS 7D Mark II is a powerful mid-level DSLR. In fact, as of September 2014, it is the most powerful EOS camera in the line up, being the first to add dual DIGIC 6 image processors to a 20.2-megapixel APS-C sized CMOS image sensor as well as a new 65-point All Cross-Type AF system. In other words, the 7D MKII is fast, capable of shooting at 10 frames-per-second continuously for up to 31 full resolution RAW images, or up to a staggering 1,090 Large Fine JPEGs. With capabilities like those, you'll appreciate the incorporated Canon Dual Pixel CMOS AF (DAF) Technology, which translates to dramatically improved AF performance in video and Live View still imaging modes -- in other words, the 7D MKII is really good at tracking fast-moving subjects.
Or maybe you're more into shooting video. The 7D MKII has you covered there as well. You can record Full HD 1080p video at 24 or 30fps, or 720p HD video at 60fps to create stunning slow motion projects. The 7D MKII has a built-in microphone, a headphone jack for audio monitoring, and even a mini HDMI port for recording uncompressed HD video to external recorders. Finally, the 7D works with Canon's STM (Stepping Motor) lens, which are virtually silent as they adjust focal settings.
Canon EOS 7D Mark II Features
The Canon EOS 7D Mark II will be available this November (2014) in two versions -- a $1,799 body-only kit, or the $2,149 kit that bundles an EF-S 18-135mm f/3.5-5.6 IS STM lens. The new LP-E6N lithium ion battery pack and charger are included with both versions (hurray!).