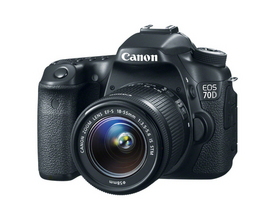 Canon's introduction of the EOS 70D brings some new and exciting technology to the table. The revolutionary new Dual-Pixel CMOS AF gives the camera some abilities that are not possible on other dSLRs. As the replacement to the 60D, there have been some major upgrades as well. Starting with the new CMOS sensor featuring 20.2-Megapixels and the new AF system, you will also find the new DIGIC 5+ image processor, 19-point all cross type AF system when shooting with the OVF, built-in WiFi, dual layer metering system and a 3.0-inch Clear View II LCD screen. All of these great features, plus a many more, combine with 103 Canon lenses (as of July 2013) to give you one of the most versatile and impressive collections of lenses available.

With all the technical innovation and features you should not let this camera intimidate you. It has Canon's Scene Intelligent Auto shooting mode for anyone lacking in experience as well as advanced manual modes for those with more experience. In other words, the camera is as easy to use as any other, while still providing full control for the more experienced photographer.
Leading the way in the 70D's new technology is the innovative 20.2-Megapixel Dual-Pixel CMOS AF imaging sensor. This sensor has greatly improved the camera's video and Live View shooting. The pixels on this sensor feature 2 photodiodes instead of one, allowing for phase-difference detection autofocus on 80% fo the image plane while the camera is in Live View mode. This allows for much greater and more accurate AF than the previous contrast detection AF found on the other EOS cameras. When it comes to video shooting, the new AF system allows for better continuous AF. Combining this with the Movie AF servo even allows you to change the focus point of your movie smoothly and accurately just by touching the LCD screen.
Built-in WiFi adds another dimension to Canon's mid-level cameras. Combined with the EOS Remote App, you gain an amazing amount of wireless shooting control to the 70D. Both settings and the shutter can be accessed and controlled. The WiFi can also be used to share and view images on other devices such a smartphone or DLNA enabled HDTV. Printing, uploading and sharing with other cameras are also possible. This provides usability and convenience that is not very common on a dSLR.
Powering and controlling the 70D is Canon's DIGIC 5+ image processor. Although it is the brains behind the camera's incredible new features, the processor is easy to overlook on a list of features. While it provides the camera with up to 7fps burst shooting; it is also responsible for the camera's noise reduction, scene modes, multi-shot modes, subject tracking and controlling the AF system of the sensor. This is a huge workload that is handled very well by the processor.
With all of the new and upgraded features, you will not have to adjust to a new feel. The body of the 70D is almost identical to the 60D in both size and shape. The biggest difference has been the rearranging of some of the controls. It has a fantastic feel in your hands, solid and sturdy with a comfortable slip-resistant grip. Shooting in any situation is has been made possible with the 3.0-inch, 1.04-Million dot Clearview II LCD screen. This incredibly sharp touch LCD screen flips and rotates to allow you to shoot over, under and around just about anything. Touch operation with the screen is as easy and accurate as the latest smartphones and tablets, a huge improvement over touch LCD screens of the past.
If you prefer to shoot with an optical viewfinder, you will love the new Intelligent Viewfinder and superimposed transparent LCD. This pentaprism OVF offers approx. 98% field of view with a 0.95x magnification, and an adjustable diopter. New construction and coatings improve its cold weather performance and reduce glare, making it easier to see. The superimposed LCD displays a plethora of shooting information so that you never have to take the camera away from your eye. On top of the shooting settings, an electronic level, grid and all of the camera's AF points for all AF modes are visible to you. Even with all of these great features, Canon has left the option to turn all of it off, so you can have an unimpeded view of what you are shooting; if you so choose.
Our performance tests for the 70D were fantastic. Amazingly, the camera is able to capture its first image after being turned on in just 3/10 of a second, so you will never have to miss the action. The shutter lag is almost non-existent when the camera is pre-focused. When allowing the camera's autofocus to work, it ranges from less than 1/10 of a second to 3/10 of a second using the camera's 19-point AF system. If you are shooting in Live View mode, the AF slows a bit despite the new image sensor coming in between 0.4 and 1.6 seconds. Both AF results are depending on the zoom and lighting conditions. The shot-to-shot delay in single shot mode is a quick 0.24 seconds without the flash and just 0.42 when while using it. The burst shooting modes do not disappoint either, with low coming in at 3.33fps and high surpassing the specs and coming in at 7.69fps. All of our tests were completed using a Sony 94MB/s UHS-1 32GB SDHC memory card, Program mode, ISO auto, flash off and all other settings at the factory defaults.
Looking at our outdoor sample images, the camera performed very well overall. Our outdoor samples show excellent exposures and bright, vivid colors. Shooting with both the LCD and OVF, the images came out incredibly sharp from both AF systems. Despite the overall excellent quality of the images, we did see some chromatic aberrations in the high contrast areas, particularly around the power lines.
Our indoor sample shots give us a clear look at the image quality in a controlled setting. These images allow us to look closely at the fine details, exposure, color and noise levels throughout the ISO settings. At the lower ISO settings, 100-800, the images are crystal clear and incredibly sharp. They show an amazing amount of detail and almost non-existent noise levels. After ISO 800, noise starts to become more relevant but stays under control through ISO 3200. After that you will want to be careful as the noise starts to fade away the fine details and soften the image.

To assist with your low-light images, Canon has included a small but powerful pop-up flash unit. With a range of 39.4 ft. at ISO 100, this flash is very handy in small to medium sized rooms and can be useful as a fill flash in harsh lighting. The hot shoe on top of the camera also allows for the addition of external speedlights. Wireless flash units are also controllable with the 70D for your more complicated lighting setups.
Shooting portraits can be as easy as using any point-n-shoot camera if you switch the 70D into Live View mode. It does an excellent job of detecting and following any face that comes into the screen, even if they are not directly facing the camera. With the new Dual Pixel CMOS AF system, the camera is faster than ever with the face detection and AF, so it is easier and more pleasant to use.
The 70D features two special shooting modes that are normally found on a point-n-shoot camera. HDR Backlight Control and Handheld Night Scene modes both use multiple images to create a higher quality single image. The HDR shooting uses multiple images at different exposures to bring out the shadows and highlights that the camera's normal dynamic range would not capture. In other words, with a bright light behind your subject, you will still get a perfectly exposed subject combined with a background showing more detail than with a single shot. The camera will also want to use the pop-up flash unit to help light the subject. Handheld Night Scene mode works in a similar way, taking multiple shots at a high ISO to reduce blur. It then combines them in an attempt to reduce the amount of noise in the image. Keep in mind that neither of these modes should be used to replace taking a correct HDR or Night shot, as the quality is nowhere comparable.
Canon's new sensor has greatly improved the video capabilities of the 70D over any other EOS camera to date. It allows the camera to operate like a camcorder, giving you a fantastic continuous AF system, smooth shifting of focus while recording with an STM lens and a slew of shooting settings. If you are not sure how much of a difference an STM lens will make, please check the comparison videos between an STM and an older lens in our samples. Our samples show how well the camera keeps its subjects in focus, even when they are moving. They also show the overall quality of the full 1080p video, although tracking focus would not follow my black lab . The audio from the built-in microphones is decent as long as the audio source is close to the camera, but the built-in audio input allows you to easily increase and direct your sound quality. Please look for our special how-to article on shooting video with the 70D for tips, tricks and a much more detailed look at video recording. (Coming soon)
Powering the 70D is a 7.2V, 1800mAh rechargeable Li-Ion battery. Canon claims that this enough for the camera to capture up to 1000 shots on a single charge (800 shooting 50% with the built-in flash). This number doubles with the addition of the BG-E14 battery grip and second LP-E6 battery. This is the same battery used by the 60D, so if you are looking at upgrading, your current batteries are still good. Using the Live View shooting mode and video features will greatly reduce this battery life, so if you are looking at shooting video, you will want to have several spares on hand. A quick charger is included with the camera and Canon also sells an AC adapters, additional chargers and portable car chargers as well.
Bottom Line - The Canon EOS 70D is a powerful dSLR camera with some new technology that has changed what we can expect from this class of camera. It's new Dual Pixel CMOS AF has greatly increased the Live View and video recording performance, giving you options and abilities we have not seen before on a dSLR. This new technology did not hurt the image quality or performance in any way either, as the camera excels in both. With a MSRP of US $1,199.00, it fits right in line as a mid-level dSLR. This is a fantastic camera for anyone looking at upgrading from an entry-level camera or looking to jump right in with their first dSLR model.