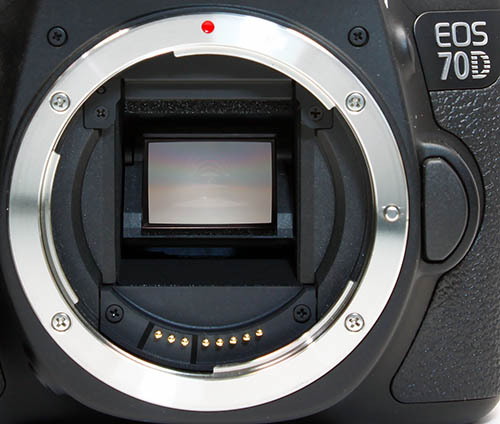 The Canon EOS 70D features Canon's EF mounting system, which supports both EF and EF-S lenses.
Canon's new 20.2-Megapixel APS-C sized CMOS image sensor. With the highest resolution of an APS-C sensor of any Canon camera, the amount of detail possible is greater than ever before. It also provides plenty of room to crop your images.
The redesigned image sensor is also the source of their new Dual Pixel AF system. Each pixel in this sensor features two photodiodes instead of one. This allows each pixel to work using phase-detection and capturing light, greatly increasing the speed of Canon's contrast detection AF. By greatly increasing the speed of the AF, Canon has made it easier and more fun to shoot with the camera's LCD screen via Live View. It also adds some great new abilities to the 70D's video capture capabilities.
Processing your images is the new DIGIC5+ image processor. With two processing units, the processor helps to reduce image noise, provides real-time aberration correction and offers up to 7fps continuous shooting. This blows away the 5.3fps found on the 60D. The processor also controls the camera's special shooting modes and in-camera processing options. These features allow the camera's Scene Intelligent Auto, in-camera HDR and in-camera RAW processing to work quickly and flawlessly while you are on the go.
The built-in, auto pop-up flash unit has a GN of 12m at ISO 100 or up to 39.4 ft. The camera offers control over the flash compensation, red-eye reduction and wireless flash controls. Any of Canon's wireless external flash units also work with the 70D.
Composing your images is accomplished with Canon's new Pentaprism Intelligent Viewfinder. Featuring a 98% field of view, new construction and magnification of 0.95x, it is now more reliable a pleasure to use. It also features a transparent LCD to overlay all of your shooting information inside the viewfinder. This LCD is customizable from a list of options to show you just the information you want to see.
Another option for composing and viewing your images is the 3.0-inch, 1.04-million dot Vari-angle touch CLD screen. Capacitive touch technology allows you to use the popular two-finger touchscreen motions and gestures that most people have gotten used to with their smartphones and tablets. It also allows for touch AF in both still and video shooting modes as well as touch to capture in still shooting mode.The Vari-Angle feature allows you to see the screen in any lighting conditions. In the rare case that you would get a glare from the resin-coated screen, it can be tilted or turned to remove it. This is also a great way to shoot in difficult situations.