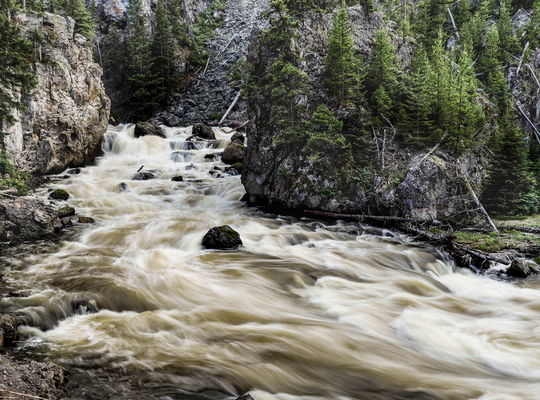 The Canon EOS 6D Mark II is capable of recording Full HD 1080/60p video at a variable bit rate that maxes out at 60Mbps. So up to 60 frames-per-second at a bitrate that's around double that of consumer Blu-ray Discs. To shoot video, one toggles the Live View / Movie switch on the back of the camera, which turns on the 3.0" Vari-angle Touch Screen display and engages the Dual Pixel CMOS AF. Once in Movie Mode, simply tap the Start/Stop button to begin recording and again to end recording.
In an era where 4K TVs are flying out of big box stores and many smartphones shoot 4K/30p video, it's admittedly disappointing when a Full Frame DSLR can't keep up. It's not necessarily about spec-sheet bragging rights, either, but rather if you're setting out to make films or vlog or a web series, whatever, 4K content is more valuable to distributors and advertisers. Coupled with the fact that DSLRs lack in-body image stabilization built into mirrorless systems, overall movie quality and capability remain the 6D Mark II's most significant drawback for anyone but dedicated still photographers.
That said, the Full HD 1080/60p videos, themselves, are quite good (although, by mistake, I recorded my test videos in 1080/30p -- my apologies). The Dual Pixel CMOS AF is speedy, using the touchscreen to adjust focal points works effortlessly and silently (depending on lens). The movies are also error/noise free, and colors and contrast are good. Again, if you're a still-focused photographer who wants to occasionally record videos, or need a secondary video camera, the 6D Mark II performs quite well.
Also, you can engage Time-Lapse Movie Mode, which is in 4K and automatically renders a motion JPEG video from a group of stills captured with the interval shooting.
BATTERY LIFE
The EOS 6D Mark II is like many modern DSLRs -- if you're mostly using the optical viewfinder, you get OUTSTANDING battery life, shooting for hours on end without the need to recharge or swap in a fresh battery. Canon claims up to 1,200 images at 73°F/23°C.
However, if you switch to Live View, check your photos often, engage GPS or WiFi/Bluetooth/NFC, or record a lot of movies, the battery drains MUCH FASTER. Videos, especially, tax the camera's sensors, processors, and display in such a demanding ways that, if you don't leave home with a full charge, you're shoot will be over quickly. In these scenarios, Canon claims up to 380 still images at 73°F/23°C.
Overall, the 6Dii performed better than expected and Canon makes it easy to extend battery life for everything but dedicated video recording.
WIRELESS PERFORMANCE
Equipped with Wi-Fi, NFC, Bluetooth, and GPS technologies, it's easy and simple to connect the EOS 6D Mark II to an iOS or Android device running the free Canon Camera Connect app, or PictBridge-compatible Canon printers. Running Canon Camera Connect, with Wi-Fi OR Bluetooth, you can transfer files to your smartphone for sharing on social media, though transferred images are resized JPEGs and not full-sized RAW files. This works reasonably well and you can then process images on the go. Helpful for field work or press events, but not for larger printing or live events where you'd need an ethernet port setup.
However the Canon Camera Connect App's KILLER feature is the ability to remote control the camera itself. If you're shooting long exposures like stars, group shots, and doing time-lapse, being able to walk away form the camera, and not bump it as the shutter release, it's a terrific modern feature to have.
BOTTOM LINE
The $2,000 price-point is a fascinating one for DSLRs and ILCs, with a bounty of excellent choices, whether it be Olympus' flagship OM-D E-M1 Mark II, Nikon's flagship APS-C-sensor D500, or this entry-level Full Frame EOS 6Dii. Each one has their ownstrengths -- the E-M1ii is one of the fastest and most rugged cameras in the world, while D500 takes gorgeous stills and has an outstanding AF system...
And this new 6D Mark II takes wonderful still pictures and offers a lot of creature comforts wrapped in a package that makes it a pretty affordable way of getting into a Full Frame system. Sure, it's not the fastest or most rugged DSLR ever made, it should shoot 4K videos, and some folks will be happier sticking with their older camera bodies, but even with a few caveats, it's hard to deny how much performance and accuracy and convenience the 6Dii offers. In short, the Canon EOS 6D Mark II is the perfect package still-focused photographers shooting landscapes, wildlife, portraits or weddings.
PICK THIS UP IF...
You've already invested in Canon EF lenses and want to make your first jump to a Full Frame camera system OR if you're considering a 5D Mark IV but don't need all of it's bells n' whistles OR if you having an aging 6D and are looking for bettering metering, ISO performance, wireless capabilities, and a longer-lasting battery.