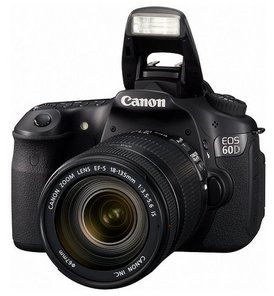 Canon's EOS 60D is their newest professional level dSLR camera, replacing the 50D. As the introductory Professional model under the 7D, it features the same size but improved APS-C 18-Megapixel CMOS imaging sensor, an all new DIGIC 4 imaging processor, and a 3-inch Vari-Angle LCD with 1,040,000 pixels. It does lack some of the speed that the 7D features, but Canon has to draw a line somewhere. The updated internals of the 60D should help you produce some outstanding images. They have improved on the HD Video capture capabilities by adding manual exposure controls and an audio input for better sound quality. Canon has also switched its memory card format from the Compact Flash to the Secure Digital format, including the new SDXC cards.

This solidly built camera body comes to you slightly smaller and a couple ounces lighter than the 50D and 7D. It also has a simplified set of controls, which utilize using the LCD screen settings menu instead of having a shortcut for each setting. All of the camera controls can be adjusted or reprogrammed to better suit your needs if you do not like the default settings. Canon has combined the Multi-controller with the Quick Control Dial to save even more space, although the Multi-controller could have a more responsive feel. A new locking mode control dial still allows for easy and quick changing of the camera's shooting modes, but now there is no worries about accidentally changing the shooting mode at the wrong time. The 60D is no stranger to custom controls. Although there is only one custom setting on the control dial, the camera's custom menu features nearly as many options as the 7D, giving you tons of personalized settings and controls. While the camera features wireless slave functions, there is no wired control of an external flash unit, which could be an issue for someone with a wired setup looking to upgrade.

Framing and viewing your images is accomplished on the new 3.0-inch, 1,040,000 dot Vari-Angle LCD screen. A feature that Canon has not added to any other dSLR until now, you can now change the position of this high quality LCD to shoot over and around obstacles with perfect accuracy. The screen itself is coated to help resist scratching and to cut down on glare for shooting in most any lighting conditions. It can also be tilted to remove glare or turned around so it can be hidden. If you choose not to shoot with the LCD, the Optical View Finder provides approx. 96% frame coverage along with a new transparent LCD that shows you all of your shooting settings and a new 6 level battery meter.

Performance from the 60D is very good, continuing Canon's excellent performance standards. Starting up is incredibly quick at just under 1.0 second, although it was a little slower than the speedy 7D. When the camera is pre-focused, the shutter lag is almost non-existent and not noticeable. When allowing the camera to autofocus, we were consistently able to capture images between 2/10 and 5/10 of a second, depending on the focus distance, light, lens used and focus mode. Capturing images in single shot mode, the camera easily captured 5 images under two seconds for a shot to shot delay of less than 4/10 of a second without the flash. Unfortunately we had difficulty with the pop-up flash on our eval unit and were not able to test the delay while using it.

Burst shooting with the 60D is a big point over the 50D, with a burst rate of up to 5.3fps. Shooting in the lower speed, we were easily able to capture 3.0fps in both RAW and JPEG formats, the only difference being the number of images that can be captured (aka frame depth); less with RAW. Using a Sandisk Extreme SD card, we were able to capture images at 5.5fps in High Speed mode, just above the 5.3fps that Canon claims. This kind of burst mode performance makes the 60D one versatile dSLR, whether you're a wedding photog, or you shot sports and need a capable backup body.

Our outdoor image samples taken with the EOS 60D show the camera's outstanding image quality, providing excellent exposures in all of our test situations as well as vibrant, realistic colors. It handled our higher dynamic range museum shot very well with the direct sunlight and dark shadows in the same image. Shooting with the kit 18-135mm EFS lens you have an excellent range to shoot vast landscapes and group portraits on the wide end and you have some zooming capabilities on the telephoto end. While it will get you closer than what the naked eye sees, if you want to get extremely close to a distant object you will need a larger telephoto lens. We did notice some slight barrel distortion on the wide end, slight edge softness and more chromatic aberrations than we expected to. The first two are very minor, but the aberrations were present in many of our outdoor images and easy to spot when viewing the images at 100%.

Looking at our indoor images we see a crisp, well exposed image throughout. Looking closely at these images, we can see that the noise within the images has been controlled very well. The image produced by the 60D is slightly duller than that of the 7D at the higher ISO settings. This dampens the noise within the image, giving you a more pleasing overall photo. ISO's 100 - 1600 produce outstandingly sharp and clear images that are capable of producing excellent full-sized prints. ISO 2000 - 6400 are all acceptable, but the noise starts to become more noticeable and you will want to keep your overall print size down a little. The expanded ISO 12800 is unacceptable and should only be used if absolutely necessary.

Our first portrait shot was taken with the kit 18-135mm EFS lens and the camera's built-in flash. The subjects color and skin tones are good overall, although the flash was a little strong on the cheeks, losing a little of the skin texture. The only redness in the eyes outlines the reflection of the flash itself and can easily be removed in post-processing. Otherwise the eyes show a great deal of detail as does the rest of the image. The second portrait show was taken without a flash and with a Canon EF 70-200mm f/2.8L IS USM Telephoto lens. Here we can also see great skin tones with a well exposed overall image. Without using the flash, there is no worries of redness in the eyes.

Shooting sports was also a pleasure with the 60D. Combining its excellent noise handling with its 5.3fps high speed burst mode allows you to easily capture all of the action without missing a beat. Again shooting with the Canon EF 70-200mm f/2.8L IS USM Telephoto lens at both the football game and swim meet, we were able to capture outstanding actions shots that are full of detail. With the camera in Aperture Priority mode, it was easy to pick an appropriate ISO setting to go with the lens's f/2.8 aperture. Our samples range from ISO 400 - ISO 1600 and they all show sharp action with plenty of detail. The only real flaw we noticed were some aberrations in the football image along the edge of the white jersey, which more than likely was caused by the lens.

The EOS 60D's video capture quality is very good, producing sharp, highly detailed videos with sound. Faster motion tends to blur the subject and any change in distance will require you to refocus manually if you want to continue shooting. While much better than the movie mode of a compact camera, the 60D's video capabilities still lack compared to a dedicated video camera. It does have some improvements over Canon's previous models, mainly with the addition of manual exposure controls. It also features a stereo mic input, which allows you to record high quality audio directly onto the camera. It's ability to edit on the camera and the VGA crop function allows you to add an additional 7x zoom to a 640x480 (VGA) movie. The biggest fallback is the camera's inability to autofocus while recording.

Powering the EOS 60D is the LP-E6 7.2V, 1800mAh Li-Ion power plant. While competing our tests, we were able to capture approx. 1500 images and videos while only using 2/3 of batteries capacity. This shows that Canon's estimate of 1600 (CIPA) images is easily obtainable. Canon also has a battery grip (BG-E9) allowing you to double this number by using two LP-E6 batteries, or if you are in a bind, you can insert 6 AA-Type batteries for some extra power (6 Alkaline Batteries = 550 images).

Bottom Line - Canon's EOS 60D is an excellent replacement for the EOS 50D. With a new and improved 18-Megapixel imaging sensor, upgraded DIGIC 4 processor, 5.3fps burst mode, 3.0-inch vari-angle LCD screen and a slew of in-camera features that greatly increase the speed and ease of a photographers workflow, this is an excellent upgrade or starting point for a photographer. The overall excellent image quality and increased speed over the 50D make this camera a pleasure to use for the same price. With a MSRP of US $1099.99, this is an excellent priced mid-level, professional model. If you like many of the 60D's features, but are looking to spend a little less money, check out the Canon EOS Digital Rebel T2i. If you need even more speed, the EOS 7D might be the ticket.

*The pop-up flash on our sample unit worked fine until we attached the Canon Speedlite 430EX II. After using this flash, the pop-up flash no longer worked. The camera itself says that an external flash is attached all the time.