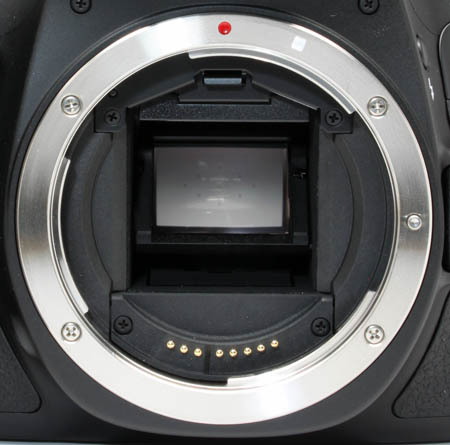 The EOS 60D continues to use the EF/EF-S lens mount that is found on all of the other Canon dSLR cameras. This means that you have over 50 Canon lenses at your disposal for any shooting situation. You can see the lens release over to the right as well as the built-in flash release, DOF (Depth-Of-Field) Preview button and the microphone along the right side of the photo above.

Just like the 7D and T2i, the 60D uses an 18-Megapixel APS-C sized sensor. It produces images with a resolution of 5184x3456 and a clarity that allows you to see even the finest details within the entire image. Designed to work with Canon's EF and EF-S lenses, this APS-C sized imager offers a conversion factor of 1.6x. Thanks to its "high sensitivity" design, this CMOS sensor is capable of recording at extremely high sensitivities settings, with a maximum ISO rating of 12800 (with ISO Expansion set to On).

With the 60D comes an improved DIGIC 4 processor that allows the camera to now shoot with multiple aspect ratios, perform in-camera RAW processing, Full HD video capture, Auto Lighting Optimizer, creative filters and a full list of Live mode options. It also has the ability to capture its 18-Megapixel images at an astounding 5.3fps with a 14-bit signal.

Here you can see the controls located on the front of the camera. Switching between manual and auto focus are controlled on the lens as well as the image stabilizer (if the lens offers this feature). On the camera itself you can see the lens lock release and the flash release at the top. You can also see the built-in mono microphone and speaker on the far right.


Here we can see the 60D's flash hotshoe for connecting external speedlites (like the 430EX II shown below). Utilizing a E-TTL II flash metering system, the 60D is compatible with all EX-series Speedlites, and even offers in-camera configuration with some models.

Both sides of the 430EX II, including all of the controls and display on the back.

The 60D's viewfinder has been redesigned to provide you with 96% coverage and 0.95x magnification. A new transparent LCD layer has added a battery indicator and increased exposure information.It also has a -3.0 to +1.0m-1 diopter adjustment correction and an eye point of 22mm.

This 63-zone, dual-layered metering system was specifically designed to operate with the 9-point AF system. It takes into account for the colors within the image and around the focual points to increase the accuracy, especially in difficult situations.