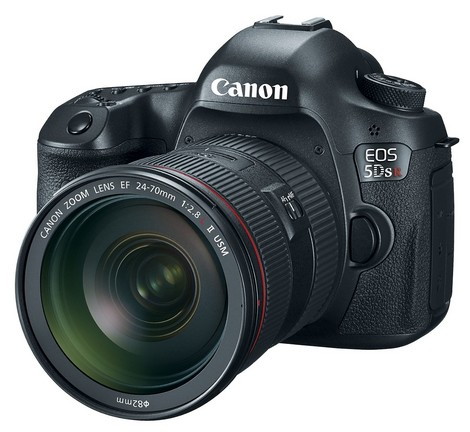 Note: The EOS 5DS and EOS 5DS R are basically the same camera. The only differences are the 5DS R has no low-pass filter, and costs about $200 more.
Canon's new EOS 5DS R is the near identical twin to the new 5DS, but with a few small differences. While it shares the same impressive new full frame sensor, with 50.6-megapixels (the world's highest resolution full frame 35mm format CMOS image sensor, at release time), the 5DS R does not feature a low-pass filter. By canceling the low-pass filter, Canon claims the 5DS R is able to,"deliver sharp images, squeezing the most out of every pixel.".
Like all of Canon's 5D-series EOS models, the 5DS R is aimed at photographers who want the benefits of a full frame sensor, originally only available to the EOS-1 line, in a more compact package. The 5DS R still sports a rugged chassis with weather sealing, which they claim offers improved stability, thanks to a, "reinforced chassis, baseplate and tripod lug.".
To help process the light data from the 5DS R's 50-megapixel image sensor, Canon included dual DIGIC 6 processors. They help keep the camera's performance robust while processing these huge image files, along with the camera's Full HD video capabilities.
Another improvement Canon made over past models is an updated mirror vibration control system, which helps reduce mirror bounce and camera shake. They've also added a new Arbitrary Release Time Lag Setting, which helps to minimize vibrations when using the Mirror Lock mode by offering several release interval settings (1/8, 1/4, 1/2, 1 and 2 seconds), over the typical method of pressing the shutter release once to lock the mirror, and once to release it.
The 5DS R's AE system has been updated with a new anti-flicker system that, "automatically adjusts shutter release timing to help reduce disparities in exposure and color especially during continuous shooting.". This means you'll have less instances of exposure/color shift when shooting in gymnasiums and other auditoriums that often use sodium vapor and/or fluorescent lighting. They've also added two new white balance settings (Ambience Priority and White Priority), to help produce accurate colors in mixed and tungsten lighting conditions.
Along with a large, high resolution LCD on the back, the 5DS and 5DS R offer Canon's Intelligent Viewfinder II, which provides a 100% field of view, and the ability to, "display cropped shooting frames and superimpose a customizable selection of camera settings and data such as dual-mode electronic level display and grid, as well as exposure, white balance, metering, drive, image quality and AF modes.". There's even a new customizable Quick Control Screen, which is a first for an EOS series camera. This screen allows you to quickly change often used camera settings.
Canon EOS 5DS R Features:
The EOS 5DS R will start shipping in June of this year (2015), with a MSRP of $3,899.00 for the body only.
Additional Product Views