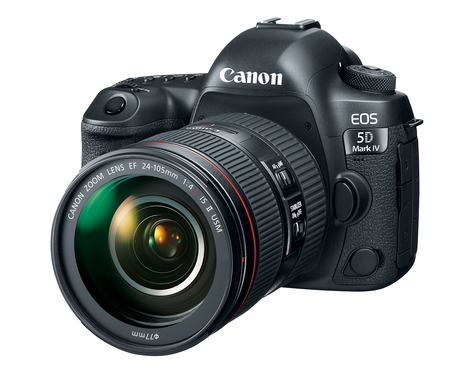 5/1/2017: Review written by Josh FateUPDATE: for first impressions and lots of sample images, check out Hands On: Ballooning with the Canon EOS Mark IV over in the Darkroom.

````
Listen close and listen clear. Hear that? Right there?

That's the sound of photographers all over the world losing their collective minds because Canon just dropped some insanely good news into our laps...The 5D's been upgraded again, and it's better than ever!

Let's back up for a second. The Canon 5D Mark II blew the doors off late 2008, ushering in an era where DSLR cameras became much more than still photography tools, but also gear capable of shooting professional quality film and television productions in Full HD 1080p. The Mark III later improved performance and capabilities, setting a new benchmark.

Now it's time to meet the Canon EOS 5D Mark IV, which promises to be a powerhouse for pro and enthusiast photographers even before we add in the fact that it now shoots 4K DCI videos at 30fps and a staggering 500Mbps. Yep, this DSLR records movies at the same resolution and frame rate as professional cinema projectors.

All in a camera body costing less than $3500.
So what's under the hood?

The Canon EOS 5D Mark IV boasts an all new 30.4-megapixel 35mm Full Frame CMOS image sensor mated to the DIGIC 6+ Image Processor, good for 7fps continuous shooting at full resolution and an expanded ISO range of 50-102,400. As we mentioned, 4K DCI recording is the highlight, but you can also use 4K movie recording to grab 8.8MP still frames, opt to shoot in 1080p at up to 60fps, or select 720p at up to 120fps for buttery-smooth slow motion.

Lastly, the 5D Mark IV adds built-in Wi-Fi and NFC technologies to connect the camera with iOS and Android mobile devices running the Canon Camera Connect App. This app allows users to transfer still images and any movies recorded in the MPEG-4 to phones and tablets.

No matter how you summarize it, the Mark IV promises to raise the bar among professional Full Frame camera systems.
Canon EOS 5D Mark IV Features


For a FULL LIST of specifications and features, check out THIS .PDF from Canon.
In the Box

The $4,599.00 (MSRP) kit includes the longer-reaching EF24-105mm f/4L IS II USM lens, and should be available in late October.
Additional Product Images