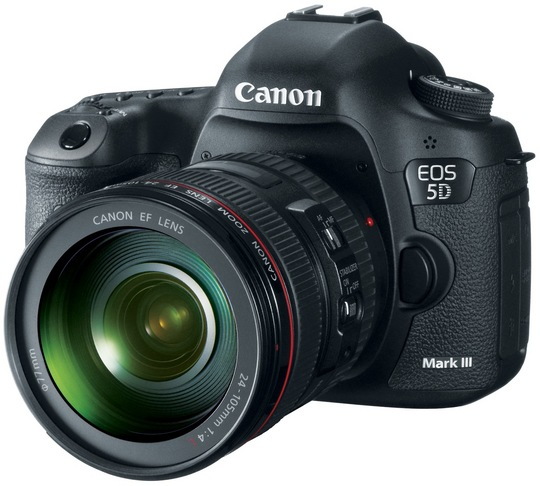 In March of 1987, Canon introduced the first EOS series SLR, the EOS 650. Now, on the 25th Anniversary, they're launching the successor to the extremely popular and versatile EOS-5D Mark II. Three and a half years in the making... a brand new 22.3 megapixel CMOS sensor 17x more powerful than the Mark II... and boasting a number of premium features also found on the recently announced EOS-1D X...
Ladies and gentlemen, meet the Canon EOS-5D Mark III.
A full-frame camera designed for filmmakers and photographers alike. From the 1D X, there's the DIGIC 5+ Imaging Processor as well as a high-performance 61-point High Density Reticular AF (autofocus) array with up to 41 cross-type point and five dual cross-type points available. The Mark III's new processor means the fastest 5D camera ever, with continuous shooting speeds up to 6 frames per second (a 50% uptick over the Mark II). The Mark II also boasts better low-light performance than its ancestor, with a 2-stop ISO improvement, as well as improved weather resistance for sports and wildlife photographers.
If you're a filmmaker or television producer, the 5D Mark III is capable of shooting multiple resolutions in the H.264 compression format at various frame rates (all while embedding SMPTE-compliant time code: Full 1080p in 24p, 25p, and 30p; 720p in 60 and 50 fps; and 480p at 30 or 25 fps. WIth the DIGIC+ processor you're going to get the best looking dSLR-recorded HD possible, and continuos recording time has been improved up to 29 minutes and 59 seconds. There's also manual audio control and a first-ever-for-the-series headphone jack for audio monitoring.
This is one camera we can't wait to get our hands on to test in person. Based of the announced specs and its EOS pedigree alone, the EOS-5D Mark III appears to be, as one of our colleagues said, a "dream rig."
Canon EOS 5D Mark III Features include:
The Canon EOS 5D Mark III dSLR will be available end of March (2012) at two price points: 1) body-only with an MSRP of $3,499.00, or 2) a $4,299.00 kit, which includes the 5D Mark III body and the EF24-105mm f/4L IS USM zoom lens.
Additional Product Views: