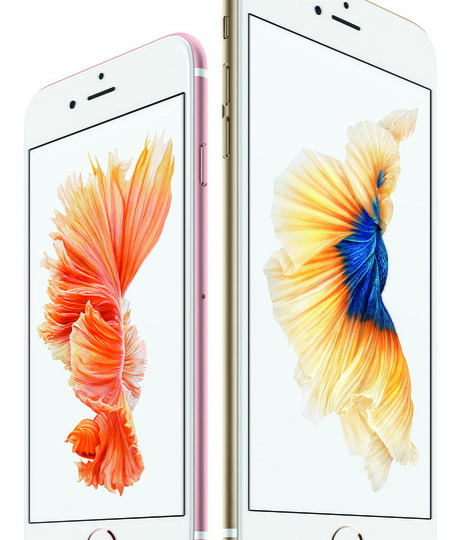 Apple has finally announced its new iPhones for 2015. The iPhone 6S Plus and iPhone 6S are both built around the A9 64-bit chip with the embedded M9 motion coprocessor. In other words, these are the fastest iPhones ever built. Many generations of iPhone owners will be able to access iOS 9.0 in the coming weeks, but in addition to improved cameras -- more on this in a moment -- the new iPhones include 3DTouch technology. Designed to work on top of normal gesture controls like tapping, swiping, and pinching, 3DTouch allows users to press and hold to preview content or access app shortcuts.
These new iPhones are truly world phones, able to access 23 bands as well as LTE Advanced with up to 300Mbps download speeds. On the Wi-Fi side of things, the new iPhones meet 802.11ac standards with 866Mbps speeds. Bluetooth 4.2 and NFC are also built-in.
The big question on everyone's mind this year was about the new iSight and FaceTime Cameras. Are the rumors true? Are we finally getting a bump up from 8-megapixels?
Hell yes!
Apple's new 12MP BSI CMOS image sensor boasts 50% more pixels and 50% more focus pixels than the previous gen sensor, while upping video recording capabilities to the 4K resolution (up to 30fps). Apple does not appear to have increased the new image sensor's size, but instead utilized technologies like Deep Trench Isolation to ensure color accuracy and reduce noise. This new iSight camera also features an f/2.2 aperture, True Tone flash, Auto HDR, Burst Mode, Time-lapse, Slow motion video, exposure control, and 63MP Panoramas. The FaceTime Camera, or front facing camera, has also been improved to a 5MP BSI CMOS image sensor capable of recording 720p HD video.
Alongside the new BSI image sensor, the 2015 S-model iPhones also include what Apple calls LivePhotos. Imagine a still image that, when touched or selected, springs to life with the moments surrounding your still image. In LivePhotos mode (defaulted to the on position), the new iPhones capture video and audio for 1.5 seconds on each side of your still image and then stores this information inside your photo (rather than as separate files). It's a pretty neat effect and we look forward to trying it out as the ability to view these files migrates to OS X 10 El Capitan, iPad, iPhone (previous gen), Apple Watch, and even Facebook by year's end.
Since you'll be taking tons of new photos and videos with the iPhone 6S or 6S Plus, Apple has dropped the prices for its iCloud Photo Library. 5GB remains free for each account, but 50GB now costs $0.99/month, 200GB will set you back $2.99/month, and the 1TB offer now costs $9.99/month.
Apple is also introducing the new iPhone Upgrade Program, available via the Apple Store. Mirroring purchasing options from the cellphone carries, Apple will sell you the iPhone 6S or 6S Plus as part of a 24-month interest-free installment program. However, you have the option to upgrade every 12-months.
Hey, wait, are there any major differences between the iPhone 6S and iPhone 6S Plus?
Of course.
The iPhone 6S Plus costs about $100 more than the iPhone 6S and boasts a larger Full HD 1080p display with a higher pixel density, a longer-lasting battery and, perhaps most interesting to photographers, built-in optical image stabilization. The previous generation iPhone 6 Plus included O.I.S. for still photos, but the 6S Plus carries that technology over to video as well.
iPhone 6S Plus Features:
New Accessories
The iPhone 6S Plus will be be available September 25th (2015) in silver, gold, space grey, and the new rose gold. Pricing is as follows: