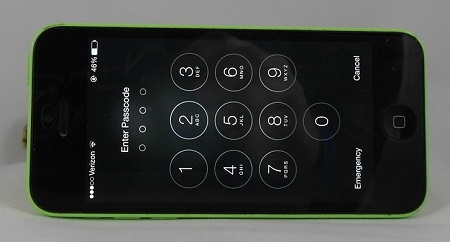 Please excuse the poor quality of some of these screen captures where we had to photograph the display screen.
The front panel of the Apple iPhone 5c primarily contains the 4.0-inch touchscreen display. It offers 727,000 pixels of resolution in a 16:9 ratio format. It's not quite a full HD display screen in terms of resolution though. The screen contains a status bar across the top (shown on the left side on this photo), which includes the camera's battery charge status and the cellular signal strength.
Above the screen at the top of the front panel is the front-facing camera, which Apple calls the FaceTime camera, and it carries 1.2-megapixels of resolution. It also can record video at up to a 720p HD resolution. The camera is the tiny circle at the far left of this photo. The oval shape just below the FaceTime camera is a microphone.
Below the screen at the bottom of the front panel is the concave Home button.
At the top corner of the iPhone 5c's back panel is the primary camera lens. The back of the iPhone 5c doesn't contain any other controls or features, but it does show off the various body colors available with this smartphone, including white, pink, yellow, blue, or green.
The smartphone measures 4.9 inches by 2.33 inches, and it's 0.35 inches thick.
The iPhone 5c's main camera -- which Apple calls the iSight camera -- offers 8-megapixels of resolution for still images and an f/2.4 aperture setting. The iSight camera can record video at 1080p HD resolution up to 30 frames per second. The LED flash is pictured just to the right of the lens.
You'll only find one button on the top panel if the iPhone 5c -- the power button. Use this button to end the smartphone's sleep mode as well.
The lower panel of the smartphone provides a few different ports. The headset jack is on the far left of this photo, while a built-in microphone is just to the right of the headset jack. The device's speaker uses the four tiny holes in the case on the far right of the photo.
The oval shaped port in the middle of the panel is the Lightning connector, which allows you to make use of a Lightning-to-USB cable for charging the battery. The iPhone 5c's rechargeable lithium-ion battery is encased inside the smartphone, and Apple recommends not attempting to remove the battery yourself. There are tiny screws on either side of the Lightning connector
You can use this port to download to your computer any photos you've shot with the smartphone.
The right side of the iPhone 5c (as you're holding the smartphone and looking at the display screen), contains just one item: the SIM card tray. You'll need to use the end of a paper clip or the SIM tray eject tool to press the tiny hole shown here and open the SIM card tray.

The left side of the smartphone has three buttons/switches. The switch on the left of this photo is the ring/silence toggle switch. The other two buttons control the volume.
You can pick from two versions of the iPhone 5c, depending on how much internal memory you want to have available, either 16GB or 32GB.

You can customize the image on your unlock screen with the iPhone 5c. However the controls will remain the same.
Across the bottom of the screen, you'll see the "slide to unlock" message, which allows you to unlock the camera's touchscreen by dragging your finger from left to right across the screen. If you've installed a passcode or another personalized identification system on your 5c smartphone, you'll input it after sliding your finger across the touchscreen.
You'll also see the camera icon in the lower right corner of this unlock screen. To gain immediate access to the iPhone 5c's iSight camera, just touch this icon and drag it upward.
This is a great feature for those wanting to use the 5c for photography, because it allows you to record a photo when you're in a hurry without having to take time to enter your passcode.

When you're ready to begin shooting still image photos, you'll see the main camera screen. Across the top of the screen are the LED flash status icon, the HDR status icon, and the camera icon, which allows you to toggle between the iSight camera and the FaceTime camera.
The currently selected camera's view will appear in the middle of the screen.
Across the bottom of the screen are the primary camera mode setting controls. Just below the camera's view are the options in a horizontal list. Drag your finger right or left across the touchscreen in the location of the camera setting controls list to switch to a new mode, which includes:
Across the bottom of the photo recording screen you'll see a thumbnail of the most recently shot photo in the lower left corner. You can touch this thumbnail to jump to Playback mode. In the middle is the recording button, used for both still images (white button) and videos (changes to red button). On the far right is the special effect/filter options button.
Recording HDR photos can be a little tricky with the 5c, just because this type of photo works best when the camera is held perfectly still, which can be tough to do with a smartphone camera where you don't have the option of using a tripod.


Shooting a panoramic photo is a pretty easy process with the iPhone 5c's Pano mode.
Just select the Pano mode setting, and you'll see an explanation on the screen that will help you properly align and record the panoramic photo.
The 5c's panoramic photos are high resolution images, offering 6928 x 2374 pixels, and the image quality is generally very good with these types of images. Even when compared to digital cameras, the panoramic photo feature with the iPhone 5c is one of the best combinations of being easy to use while creating great photographic results that you're going to find in the digital camera or smartphone camera market.

When you select the Video mode, you'll be able to record movies with the iPhone 5c's iSight camera.
The shutter button will turn from white to red when Video mode is selected, which is a good feature for this 5c smartphone. Most digital cameras make use of a red button for recording movies, so this feature helps to make the video recording with the iPhone 5c seem more natural.
You'll see the amount of time of the current video recording listed in the middle of the top of the screen.


Touch the thumbnail image in the lower left corner to enter the iPhone 5c's Playback mode, where you can see still images and videos stored in memory. Drag your finger across the screen in a sweeping motion to switch to other photos in the list.
You have some basic editing options with your still images when using the iPhone 5c. With a single image displayed on the screen touch the Edit link at the bottom of the screen. From the Edit Photo screen you'll see some icons representing editing tools, which are:

If you touch the icon for the Filter tool in the middle of the list of tools, you'll see the Choose Filter window.
Across the bottom of this new window you'll gain access to any of the eight iPhone 5c photo filters. These editing filters are the same as you could apply to photos as you shot them that we discussed earlier. So if you neglect to add a filter while you're shooting a photo, you always can add the filter later.
Just touch the button for the filter you want to apply to the stored image. The available filters are (from left to right):


From the iPhone 5c's main home screen that was discussed earlier, you can access the settings for the smartphone by touching the Settings icon. From the Settings screen you can access the smartphone's camera settings options by scrolling downward.
The Photos & Cameras menu inside the Settings menu includes:
Through iOS 7 Apple does not give you a lot of control over the iPhone 5c's camera settings. There really aren't any manual control options available, and all photos will be shot in a fully automatic mode. Some smartphone cameras give you the option of setting the ISO or possibly adjusting the exposure, but you won't have those options with the 5c.

When using the iSight camera you can choose the area of the photo on which to set the focus and the exposure by touching that area before recording the photo. This option offers the primarily ability for you to control the image.

The iPhone 5c makes use of a few different options to help you organize your stored photos in a feature called Albums.
You can organize your stored images in terms of the date they were shot, the location where they were shot, the type of photo (such as panoramic), or photos you've uploaded to a social networking site.
To create a new Album or edit an existing Album, just touch the plus icon or the Edit icon on the Albums screen. To see the images stored in a listed album, just touch the name of the album from the Albums screen.
When you have a thumbnail image displayed on the screen inside an album, touch the thumbnail to see a full screen version of that particular still image or video.
You also have the option of automatically sharing your stored photos through an iCloud account, by which those people to whom you've given access can see your stored images and comment on them. You can set up the 5c to automatically stream all of your photos to another device or to a social networking site or an online storage site.


The iPhone 5c compared in size to a DVD.