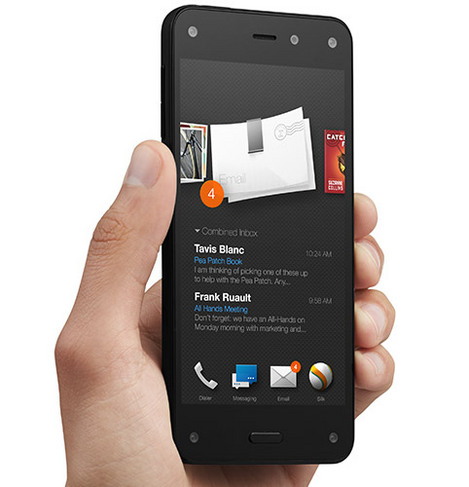 Amazon announced its first smartphone, dubbed the Fire Phone. An AT&T Exclusive, a 32GB version will cost as little as $199 with a two-year contract, while the 64GB version will run you $299 (also with a contract). Pre-orders are already being taken, units will ship on July 25th.
The Fire Phone is build around a quad-core 2.2 GHz processor with 2GB of RAM. Running on the Android-based, Fire OS (operating system), it features Wi-Fi and Bluetooth technologies as well as access to 3G and 4GLTE cellular data networks.
The Fire Phone's standout feature may just be its 4.7-inch HD display. While not the largest, and nor does it have the most pixels (at 1280x720 with 315ppi), this new display boasts 590 nits of brightness, a circular polarizer, dynamic image contrast, and what Amazon calls Dynamic Perspective. What's that? Technically, a "custom-designed sensor system that responds to how you hold, view, and move your phone. Basically, it's a glasses-free 3D display that adapts to your head movement while adding helpful shortcuts when moving the phone itself.
Next, let's talk about the camera. Amazon has added a 13-megapixel CMOS image sensor with Optical Image Stabilization (O.I.S.) and a super-bright f/2.0 aperture lens. Full 1080p HD video at 30 fps is a must, though there is no word on any slow motion. There are also Panorama, Burst Capture, Lenticular, and Intelligent HDR modes. But here's a pretty groundbreaking move: Amazon Fire Phone includes FREE unlimited photo (note: not videos) storage at full resolution via Amazon Cloud Drive. Currently, other phones only offer about 5-10GB of complimentary face.

The Fire Phone has been designed to work within the entire Amazon ecosystem and alongside other hardware like the Fire TV. Meaning, if you have a Fire Phone, you're going to want Amazon Prime. Fortunately, for a limited time, if you purchase a Fire Phone, you'll get 12-months of the Amazon Prime service which, in addition to free two-day shipping, gives users access to Amazon Prime Instant Video (tons of free TV shows and movies), Amazon Music (brand new), and the Amazon Prime Kindle Lending Library.
Lastly, in addition to many built-in apps (and many more available via Amazon's Appstore), the Fire Phone aims to improve the shopping process as well as seeking out customer service. Firefly is an app which uses the phone's camera and microphones to scan objects, entertainment content, and bar / QR codes, and then give you options to purchase them. Finally, if you worry about getting a new plane because you have to pay extra for customer service, the Fire Phone includes the Mayday app which promises help for every customer within 15 seconds.
Amazon Fire Phone Features
The Amazon Fire Phone is an AT&T exclusive, available for pre-order today. Units ship July 25th (2014).
Additional Product Views