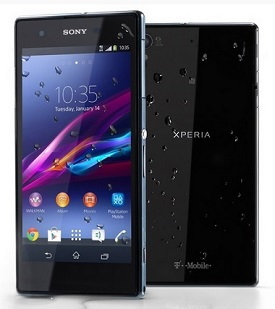 If you're seeking a smartphone that looks a bit like a digital camera, there are quite a few options other than the Sony Xperia Z1S. However if you'd like your smartphone to have some camera-like controls and features to make it easier to shoot good photos, the Xperia Z1S is going to be a model worth considering.
Sony has given this smartphone a dedicated shutter button on the edge of the unit that makes it more natural to shoot photos versus only having an on-screen shutter button. You also can use the smartphone's volume button as a digital zoom switch.
You'll find a 20.7-megapixel 1/2.3-inch image sensor with the Xperia Z1S's camera, which is similar in size to what you'd find in a beginner-level point-n-shoot digital camera. This unit's image sensor is larger than what you'll find with most smartphone cameras.
Unfortunately, all of these digital camera-like features don't mean the Sony Xperia Z1S has a perfect camera. This smartphone creates adequate photos for sharing on the Internet, but it's image quality won't be good enough to make large prints. Its image quality is not noticeably better than what you'd find with a basic point-n-shoot model.
Sharing the photos you create via social networking sites is very easy with the Xperia Z1S, as this Android smartphone makes use of the Jelly Bean 4.3 operating system. Some users will appreciate the Sony-created user interface that exists over the Android OS, while veteran Android users may find this additional layer causes clunkiness in the unit's operation. (Having said that, this review will primarily involve the smartphone's camera capabilities, rather than its other features.)
The Xperia Z1S's camera is very easy to use, as all of the camera's controls are accessible from the shooting screen. Although this model has a Manual shooting mode, it's primarily designed for use like a point-n-shoot camera. When shooting in Manual mode you can adjust the white balance or the ISO, but most of this unit's manual controls are basic in nature, just as you'd find with a beginner-level digital camera in Program mode.
While discussing Manual mode, I'll point out that the only way to shoot photos at the maximum 20MP of resolution Sony is offering with the Xperia Z1S smartphone is to shoot in Manual mode and select 20MP image resolution. The smartphone camera's default resolution is 8-megapixels, and you'll be stuck shooting at this resolution if you're using Auto mode. This can be a little tricky to understand at first, and some photographers may be frustrated by this feature.
Especially at 20MP of resolution and versus other smartphone cameras the Xperia Z1S's photos are above average in many photography situations. If you're using the 8MP resolution limit mentioned earlier though, you'll likely only notice a slight improvement in image quality versus other smartphone cameras. There isn't a significant difference in image quality between 20MP and 8MP images with the Z1S, but there is just enough of a difference to be noticeable when images are magnified on the screen.
When shooting outdoor photos in adequate light the Sony Xperia Z1S will do a good job, creating well exposed photos that are colorful and pretty sharp ... at least in the center of the image. You'll notice some softness at the edges of nearly all images shot with this smartphone camera, regardless of what type of lighting exists in the scene.
However, when shooting images indoors or in low light, you may find issues with image sharpness because of noise. Images shot with the Xperia Z1S's camera almost seem overprocessed when shooting indoor images. Despite these drawbacks, the Sony Xperia Z1S does a solid job with night photos when compared to other smartphone cameras, which tend to have a difficult time creating usable images in low light.
So while low light photos could be better with this unit's camera, especially considering its larger-than-average image-sized sensor, the Xperia Z1S's night photos are still better than what the typical smartphone camera will create.
The LED flash included with the Xperia Z1S does a pretty good job with flash photography, as long as you aren't too far away from the subject. You will notice some shutter lag with this smartphone's camera, but it's not noticeably longer when using the flash versus when not using the flash. Shot to shot delays are slightly longer when using the flash though.

The camera's overall performance levels are about average. It's not blazing fast, but it will nearly match the speeds provided by a beginner-level point-n-shoot camera.

The Xperia Z1S's camera has plenty of fun features, allowing you to add special effects to your images as they're shot or to add effects by editing photos in Playback mode. In AR mode for example, you can add cartoonish objects to any scene, such as dinosaurs, creating a simple animation or just adding objects to still images. You also can shoot in a Panorama mode that is easy to use and works well.

Additionally Sony is offering a Background Defocus mode with the Xperia Z1S's camera, which is an unusual feature to find with a smartphone camera. The f/2.0 lens included with this unit allows it to more easily create photos with a shallow depth of field.

Video recording is very easy with the Sony Xperia Z1S, as it follows a similar process to shooting still images. As with still image quality, the Xperia Z1S's video quality is bit better than what you'd find with other smartphone cameras and is similar to point-n-shoot digital cameras.
The touchscreen display on the Xperia Z1S is bright and large, measuring 5.0 inches diagonally. It was a little disappointing to find that this unit's screen has some issues with glare and washed out images when not viewed straight on. Keep in mind however that this isn't necessarily a bad feature in all usage scenarios. For instance, if you don't want nosy people sitting near you looking at what you're viewing on this large screen, the wash out of the screen when viewed at an angle will be welcomed.
It's a full HD resolution screen, which is quickly becoming the standard resolution for any smartphone device. The touchscreen feature works well and is extremely responsive.
The large touchscreen means the device has large dimensions of 5.74 by almost 3 inches, which may make it a little difficult to slide the Xperia Z1S into an averaged-sized pocket. This unit does measure only 0.34 inches in thickness, which is great.

The unit I tested was a sharp looking device with a black back covered in glass. Silver trim is used on the slightly curved edges. The glass did seem to collect dust and fingerprints pretty regularly though.

Sony included a powerful battery with this smartphone, allowing you to easily use this unit's smartphone features and camera features for an entire day under normal conditions without needing a recharge. The Xperia Z1S's battery offers a capacity of 3,000 mAh, which is plenty to power the quadcore 2.2GHz Snapdragon 800 processor chip.
Keep in mind that the Xperia Z1S is a waterproof device, even if the word "waterproof" doesn't appear printed anywhere on the device itself. (You can see droplets of water beading on the screen in the company's Z1S promotional photo shown above.) At the very least it's really nice to have a smartphone camera that isn't going to be ruined if you inadvertently spill something on it or end up using it during a rainstorm. Just make sure you've tightly closed the port coverings and that you don't exceed Sony's recommended underwater usage depth and time (which is 4 feet for up to 30 minutes) if you plan to expose this unit to water.
The Sony Xperia Z1S's front-facing camera offers 2-megapixels of resolution for still images and 1080p HD video recording. While it's handy to have this secondary camera available, it's pretty run of the mill.
Bottom Line - Sony has created an interesting smartphone camera offering with its Xperia Z1S unit. The manufacturer gave the Z1S a few physical features designed specifically to make it easier to use this smartphone as a camera, including a dedicated shutter button on the edge of the device. You also can make use of an on-screen shutter button, just as you'll find with most smartphone cameras. When looking at the Xperia Z1S's specification list for its camera, you're likely going to be impressed, as Sony has given this unit a 20.7-megapixel 1/2.3-inch image sensor, which is similar in size and resolution to what you'd find in a modern point-n-shoot digital camera. And it's certainly larger than what's found in your typical smartphone camera. Unfortunately this unit's image quality doesn't quite live up to those lofty expectations. Don't misunderstand -- the Sony Xperia Z1S creates pretty good looking photos the majority of the time, and its image quality will exceed that of many smartphone cameras currently on the market. However, its 20MP of resolution is downsized to 8MP or less in all shooting modes other than Manual mode, which is a bit of a disappointment. And the Xperia Z1S just doesn't quite create images of the high quality that you'd expect after reading its specification list. Image quality is good, but not great. Most beginner-level point-n-shoot digital cameras can match or even surpass what the Z1S can create in terms of image quality. Throw in the fact that the Sony Xperia Z1S has no optical zoom lens -- just like other smartphone cameras -- and this model can't quite match the photography quality and features that you'd find with most point-n-shoot cameras. It's a good smartphone camera, but nothing more.