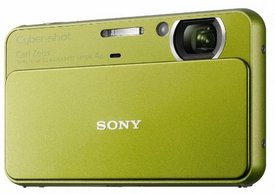 The Sony Cyber-shot DSC-T99 is a fully loaded compact digicam. With one of the smallest body's available on the market, Sony was still able to include all of the features you can imagine into this ultra-compact. Sporting a 14-Megapixel imaging sensor, 4x Carl Zeiss internal optical zoom lens, BIONZ image processor, 3-inch touch screen LCD and 720p HD video capture, this unit boasts all of the top features offered by Sony. It is also incredibly easy to use with its iAuto, smile capture and Sweep Panorama shooting modes, allowing anyone to capture high quality and creative images.

Being considerably smaller than a standard deck of playing cards, the T99 is incredibly easy to carry in a pocket or purse of any size without it even being noticeable. A sliding lens cover keeps the lens safe from scratches while also acting as the camera's power switch. With a total of just four buttons on the camera body, all of the settings and functions are controlled with the touch screen. This 3.0-inch touch LCD screen takes up the entire back of the camera and is easy to see in most lighting conditions thanks to its adjustable brightness levels.

Using the intelligent auto (iAuto) shooting mode to capture our outdoor image samples produced an overall high quality image showing good focus and exposure settings with rich colors. There is a noticeable amount of noise within these images when viewing them at 100%. This blurs some of the fine details within the image, making some of the signs that we are used to seeing clearly a little harder to read. We also noticed some slight instances of chromatic aberrations in our images along with one major instance in the trees of the museum shot. Framing and composing your images is assisted by the camera's Carl Zeiss 4x optical zoom lens. It operates completely inside the camera body and is assisted by Sony's Optical SteadyShot image stabilization to help you produce clear hand-held images.

With our indoor image samples, taken in Program mode, we see the same excellent image quality from the outdoor samples. It is easy to see that the camera captures a crisp image from edge to edge, but as the ISO goes up, the image noise quickly starts to blur the fine lines and details within your photos. ISO 80 - ISO 400 are acceptable, but as you go over 400 the image starts to get dull, both in color and sharpness, and the image details no longer stand out. Assisting you with your low-light and indoor shots is a small flash unit, with a maximum range of 9.2 ft. at ISO auto or up to 18 ft. at ISO 3200. While these sound nice, you will want to stay well within the Auto range in order to keep the ISO settings at acceptable levels.

iAuto mode also allowed for quick and easy portrait shots, as the camera was very quick to detect any faces within the frame and followed them with ease. With the assistance of the flash, we did see some redness within the eyes of our subjects. Using the red-eye removal feature on the camera removed most of the redness, but not all of it. It would be easier and produce better results to handle this with an external computer program. Sony has also included its Smile Shutter Technology and Anti-Blink function to this camera. Smile shutter allows the camera to capture an image when the detected face or faces within the frame smile, without you having to press the shutter release. The Anti-Blink feature allows the camera to capture two images when you press the shutter release, then the camera saves the image with the least amount of blinking and squinting.

Capturing an creating your home videos is a snap with the T99. With the ability to capture 720p HD videos, you will easily be able to enjoy them on your HDTV. The camera captures smooth crisp videos, but there is some noise present as well. With a small, very sensitive built-in mic, the camera has the ability to record sound. In our sample video, you hear more background noise than anything else, because these sounds were much closer to the camera than our subject.

Powering the T99 is a small 3.6V, 630mAh Li-Ion rechargeable battery. While completing our tests, we were able to capture approx. 120 images before exhausting the battery, which fell well short of the 230 images that Sony claims is capable. This is a very short battery life and a second battery is highly recommended. With the included quick charger, it is easy to keep two batteries charged and ready to go so you will always be ready.

Bottom Line - Sony's Cyber-shot DSC-T99 is an incredibly compact (even for an ultra-compact) digicam, which is loaded with powerful features like an internal 4x Carl Ziess optical zoom lens, 14-Megapixel imaging sensor, 3.0-inch Touch LCD screen and plenty of exposure options for everyone in your household. It has great overall image quality, but there is a noticeable amount of image noise at all ISO settings and some of our shooting performance tests were not quite up to par. With a MSRP of $249.99 US, this is a very capable and easy to use digicam that offers a great value for the money spent.