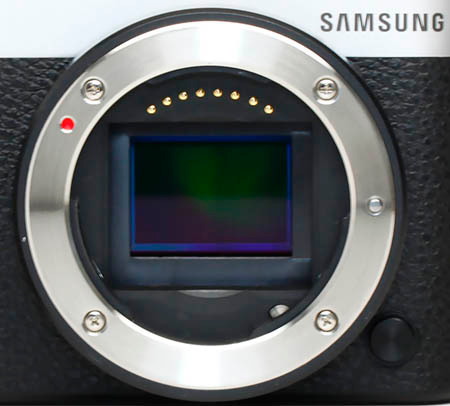 The NX500 features Samsung's NX mount system, allowing you to use any NX mount lens with this camera. It also features their new NX Autofocus System III. A hybrid autofocus system that is not only incredibly fast, but very accurate as well.
Working with the NX mount system, the camera features a 28-Megapixel, APS-C sized BSI CMOS sensor and the new DRIMe Vs, which is Samsung's fastest processor to date. These combine for outstanding image quality and performance, both in shooting performance and controlling the fantastic automatic shooting modes.
The NX500 is shown here with the 16-50mm lens that comes in the NX500 kit. This is an electronic zoom lens with built-in optical image stabilization and Samsung's iFn feature on the lens. This lens has a 35mm equivalent of approx. 24-75mm with a maximum aperture of f/3.5-5.6. The ring on the lens can be used to zoom or programmed for manual focus.
Without a built-in flash unit, the NX500 comes with a small attachable flash unit. When mounted on the camera's hot shoe, the flash can be turned on and off by raising and lowering it. Several flash modes make this flash a little more controllable than most built-in units, but lacking the power of a larger external unit.
Composing and viewing your images is accomplished with the tilting 3.0-inch, 1036k dot Super AMOLED touch LCD screen. This is an absolutely beautiful LCD screen that shows great color and huge amounts of detail with a full 100% field of view coverage. Its touch features are very sensitive and very easy to manage, making it a pleasure to use.This also offers touch shooting options that bring a lot of fun to the camera.
On top of the camera you will find a few controls. From top to bottom you have the shutter release coupled by the power switch, AEL (auto exposure lock), command dial, mobile connect button (WiFi) and the camera's mode dial. At the bottom right, sitting on an angle that is not really the top or the back is the dedicated video recording button, which lays comfortably under the thumb.
On the back there are a few more controls, which are small but well placed. Starting at the top you have the camera's second command dial and the dedicated video recording button at the far right. Next is the Exposure Compensation, MENU and Fn buttons. In the middle is the 4-way controller, allowing easy navigation through the camera menus, when you are not using the touch screen. The 4-way controller also acts as shortcuts to the DISP function, AF, ISO and burst/timer shooting settings. At the bottom you will find the Playback and Delete buttons.
On the left side of the camera you will find the camera's two Input/Output ports. On top is the HDMI port, allowing you to view your still images and recorded videos on any HDTV. On the bottom is the high-speed USB port. This allows you to transfer images to a computer or printer as well as being the camera's charging port.
Samsung uses any SD/SDHC/SDXC type memory cards to store your images and videos. With the large resolution produced by the 28-Megapixel imaging sensor and 4K video capabilities, you will want to use a large capacity card. You will also want a card that is fast enough to keep up with the burst shooting and 4K videos. We recommend using at least a UHS-1 speed card. The camera is shown here with the SanDisk Extreme UHS-1 SDHC memory card that was used during our testing.
Powering the NX500 is a 7.6V, 1130mAh rechargeable Li-Ion battery. This battery is enough to capture up to 370 shots on a single charge. This is decent for an ILC, outlasting most point-n-shoot modes, but only producing about half of what a dSLR is capable of. The battery charges inside of the camera with a USB adapter. This makes it a bit more difficult to keep a spare battery charged and ready to go, but not impossible. For long days of shooting, you will want to have a spare battery.