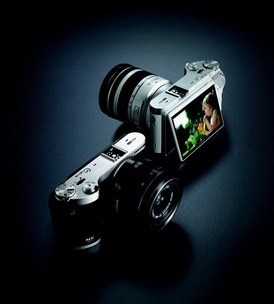 Samsung's NX300 is another powerful and affordable ILC digital camera that is loaded with fantastic features. Sporting a 20.3-Megapixel APS-C imaging sensor, Hybrid Auto Focus, 3.31-inch Touch Screen, 1/6000th shutter speed, Built-in WiFi and the DRIMe IV image processor that produces up to 8.6fps at the full resolution, you may think this camera is out of your league or price range. This is not true as the NX300a is a very affordable ILC option. It is also incredibly easy to use, as the camera's automatic shooting modes produce excellent results. Full manual control is also available with some creative and easy camera controls involving Samsung's iFn mode on its lenses. Overall this is one of the most feature-packed camera's you will find today (as of 06/2013).
As we saw on the NX20 and the NX1000, the NX300 includes all of the same great WiFi options. It allows you to take full advantage of a WiFi connection, allowing you to email or upload to social media sites, as long as a wireless internet connection is available. It also allows you to connect to another portable device to view and download the camera's images as soon as they are taken. Samsung recently combined its different apps for controlling the camera into the Samsung Smart Camera App, putting all the control into one place. Finally there is also the option of instant backup to a portable device, computer or SkyDrive.
Very compact for an ILC, the NX300 is easy to carry and operate in most situations. The textured grip on the right side of the camera gives you ability to hold on tight, while its light weight allows you to wield it all day long. The mode dial sits on top of the camera, right on the edge. It is pretty sturdy, but with a good bump, the shooting mode could be changed by accident. If you are leaving the included flash unit attached, it does add a little more bulk to the camera. While you think you might not need it, it can come in handy when you least expect it. The controls on the back are small but well placed and separated for easy use. Using the controls in conjunction with the new 3.31-inch touch screen makes the menu navigation and setting selection faster and easier than ever. This new AMOLED display also tilts up to 135°, giving you the ability to remove reflections from the screen, or to accurately shoot above or below objects that may be in your way.
Our sample kit included the 18-55mm OIS NX lens instead of the 20-50mm lens that is listed on the Samsung site. This lens features several great features including built-in optical image stabilization, Auto and Manual Focus as well as Samsung's iFn feature. Both rings around the lens turn easily and smoothly for easy and smooth zoom and focus. In certain modes the focus ring also acts as a command dial that allows you to use it to change various shooting settings. This standard telephoto zoom range works well for most standard shooting situations including portraits and landscape shots. Samsung makes several other lenses, for various situations that are available as well in both black and white.
Performance from the NX300 was excellent. The camera was able to power up and capture its first image in just 2.0 seconds. When the camera is focused, there is almost no shutter lag, and when the Hybrid AF is left to work, it took between 1/10 and 3/10 of a second, depending on the zoom, amount of light, etc. In single shot mode, the delay between was less than 3/4 of a second at 0.64 or up to 9/10 of a second when using the flash. When it comes to the continuous shooting, we were not able to get the full 8.6fps, but the 7.5fps that we achieved is still very good. (Being able to perform our tests outside in a brighter environment may make this difference.) In burst mode, shooting at approx. 4-Megapixels, the camera was able to reach 9.67fps for a short time before slowing. All of our tests were completed using a Samsung UHS-1 8GB microSD memory card (with SD adapter), Program Mode, ISO auto, Flash off and all other settings at the factory defaults unless noted otherwise.
Our outdoor sample images show the camera's great exposure and colors in the sharp, high resolution images. The camera's auto and program modes produce similar results, with the auto mode producing a slightly richer look. We also took a couple samples with the Smart Landscape mode, which produced bolder images with much higher saturation and contrast than the other two modes. Without a viewfinder of any kind, framing and composing your images is accomplished with the large AMOLED screen. It is very bright and its ability to tilt up and down allows you to see it in any lighting situation. It does draw a lot of power though, which is noticeable on the camera's battery life.
Looking at our indoor sample shots, the first thing that we noticed is that the images has a slightly shallower depth of field than we expected to see shooting at f/8. This really isn't a problem, it's just something to keep in mind while shooting. The camera produced incredibly sharp images with amazing amounts of detail, especially for an affordable ILC. Image noise is kept incredibly low throughout the ISO settings 100-3200, while the higher settings here do show some noise, they also still show a lot of detail for the particular setting. After ISO 3200, however, the noise overtakes the image, making it unacceptable.

Assisting with your low-light and indoor shots is the small external flash unit included with the camera. The flash was not built-in to save space and keep the body as small as possible. This flash is no more powerful than one you would find built into other cameras, so don't expect too much. It does make a great fill flash when the situation calls for it.
The NX300 detects and tracks faces within the frame with ease. Once a face is detected, the camera does an excellent job of adjusting the focus, metering and other settings to make sure than the face is properly exposed, no matter what the rest of the image comes out like. Our samples, taken with the flash unit, are well exposed and show fantastic colors and skin tones. The AF system was slightly off on some instances with moving subjects, which can be seen in our first portrait sample. Our second sample was taken in the Smart Portrait mode, which softens the skin tones automatically, helping to hide blemishes on the skin.
Featuring several special scene shooting modes that can be incredibly useful, the NX300's special modes are a little different than you will find on most cameras. With modes like Beauty Face, Action Freeze, Waterfall and Light Trace, these modes are designed to be a little more specific and specialized. They also produce higher quality images than most other scene modes. We sampled a few of these modes, including panorama and waterfall with excellent results. The only drawback to these modes is that they are set, there are no adjustments to give you additional options or creative freedom.
Video recording with the NX300 is fast and easy. The dedicated video recording button keeps the camera ready to record at all times, no matter what the shooting mode you are in. Add continuous autofocus, wind cut and full 1080p HD resolution and you have the perfect tool for when a single image just isn't enough. The camera handled our test situation, in less than perfect lighting, very well. Looking at our sample video we can see that the movie is a little grainy, but plays back smoothly and is a pleasure to watch. The very sensitive built-in microphone picks up all of the sounds around the camera, and the background noise in our sample is a little overwhelming, but this is an issue you will find with any camera and its built-in mic. This problem can be remedied with the NX Microphone, an external mic that uses the camera's hot shoe and USB to give you higher quality audio.
Powering the NX300 is a 7.6V, 1130mAh rechargeable Li-Ion battery. With a battery life that is supposed to capture up to 320 images on a single charge, we were a bit disappointed with it. While completing our tests and capturing around 200 images, we had to recharge the camera and almost fully depleting it a second time. Some of this is using the special features like the WiFi, but the lack of a viewfinder consumes plenty of extra power. Keeping a spare battery, or more, with camera is a great idea. Without a portable charger, it can be a little more difficult to keep them charged though, but you will want to have the spare on hand for a full day of shooting.
Bottom Line - The Samsung NX300 is a powerful and incredibly fast ILC that is loaded with great features and produces excellent looking photos. Its APS-C sized image sensor, Hybrid AF, WiFi and 3.31-inch touch AMOLED display really make it stand out from the rest, especially when compared to the other camera's in its price range. The only thing holding it back is the lack of a decent battery life or external charger to keep spare batteries ready to go. With a MSRP of US $749.99, this is definitely worth a look, despite its downfalls.