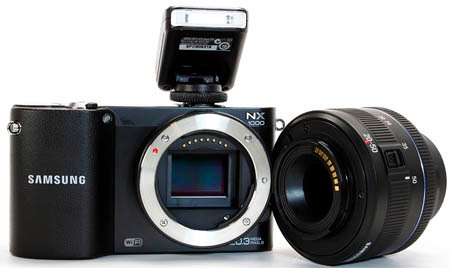 The combination of the Samsung NX mount and APS-C sized, 20.3-Megapixel imaging sensor allows this compact ILC camera to produce images that rival most dSLR cameras in both resolution and image quality. They have also been designed to keep the camera body much smaller and lighter, which makes it a pleasure to carry and operate.
Included with the NX1000 is the 20-50mm II Samsung lens. It has a maximum aperture of f/3.5-5.6, allowing for very good performance in low-light situations. This incredibly compact lens features Ultra-Low dispersion and aspherical lenses and the iFn button. This button gives you control over certain functions of the camera by just pressing the button and turning the focus ring on the lens.
While the camera itself does not have a built-in flash unit, this attachable pop-up unit is included with the camera. This flash works in all of the same ways that you would expect to find, including 1st and 2nd curtain, Smart Flash and Red-Eye Reduction. By making it attachable, they have kept the size and weight of the camera down. Larger, more powerful flash units are also available for even more power. Samsung's website does not list a guide number, but they do note a sync speed of up to 1/180th sec., and a coverage of up to 28mm.
Viewing and framing your images is accomplished on this 3.0-inch, 921,000 dot LCD screen. While shooting you get approx. 100% coverage of the area that will be captured. With 5 levels of brightness, this screen is easy to see in any lighting conditions.
On top of the camera you will find just a few controls, as the entire body of the NX1000 has been kept very simple. To the left if the camera's hot shoe and on the right is the power switch, shutter release, smart link button and the mode dial. The smart link button is a fast and easy way to share your images with a nearby smartphone or tablet. Turning it on and selecting images enables another device to see them with Samsung's Mobilelink software.
Controls on Back: Starting at the top left you see the dedicated video recording button. Next you will see the Menu button. This is used to enter the main menu system to change the camera settings and customize functions. To its right is the Fn button, used for changing certain settings like image size and quality. Next is the 4-way pad with an OK button in the middle, which also has the rear control wheel mounted around it. The 4-way pad is used for navigating through the menu and function screens as well as quick access to: DISP. (up), AF (right), ISO (down), and the Timer/Drive mode (left). All options may not be available depending on what mode the camera is in. Looking below the 4-way pad, at the left you can see the playback button that takes you into play mode, and to the right is the Custom/Delete button. This button is used to delete files during playback, and can also serve a variety of functions.
On the right side of the camera you can see the camera's two input/output ports. On top of the USB 2.0/AV Out port. Underneath is the HDMI output for connecting you any HDTV for viewing your images and HD videos.
Guaranteed to work with cards up to 128GB, the NX1000 can use just about any SD/SDHC/SDXC memory card that you can get your hands on. With its high speed functions and full 1080p HD video capabilities, we recommend the fastest card that you can get or afford. The camera is shown here with a PNY Pro Class 10 SDHC card.
Powering the NX1000 is a 7.4V, 1030mAh rechargeable Li-Ion battery. Samsung claims that this battery provides enough power to capture 320 images or up to 160 minutes of full 1080p HD video on a single charge. Also included is the quick charger shown above, allowing the battery to charge in just a little over two hours.