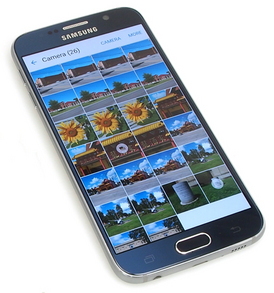 The Galaxy S6 offers a lot of sophisticated photography features for a smart phone. It captures 16M stills, and can do so at a brisk 10.3fps. It records attractive video, at up to 4k, or ultra-high-definition. You can store two custom presets with different color and exposure settings, manually select the ISO and white balance in Pro mode, and even use manual focus.

But the first thing you'll likely notice is the new metal-and-glass chassis dominated by the large, 5.1-inch super AMOLED screen. The very sharp and colorful picture will turn heads. The well saturated colors are very flattering, though I suspect some avid photographers will find the picture a little too skewed and otherworldly, perhaps too bright and warm to trust while performing edits, for example - for which the S6 offers plenty of filters and effects. Comparing a picture on the smart phone screen to the same image on an Apple monitor (that is, admittedly, only amateurishly calibrated), the S6's display is decidedly more saturated, offering richer (but less natural-looking) yellows and oranges.

When it comes to speed, the S6 excels. Although it takes about 19 seconds to capture a shot if the phone is completely turned off, you should be able to capture a shot in just one second or slightly more if the phone is in sleep mode (which is certainly the usual scenario). Here, Samsung has done an ingenious job of prioritizing photography. In addition to quick startup, the S6 gives you quick and easy access to the camera function. Rather than having to swipe the camera icon in the corner of the home screen (though you can do that too), the quickest way to launch the camera is to press the Home button twice. In this way, the S6 has just about eliminated the worst attribute of slow cameras and their kludgy smart phone brethren - missing shots due to slow power-up or faltering focus.

Also, you don't have to tap the on-screen shutter button. You can use the "volume up" button as the shutter-release. To take a quick burst of shots, you simply hold it down (you do not have to go to a menu to select a continuous shooting mode). Here, again, the S6 excels, capturing up 30 full-resolution (16M) shots. Add to this a tracking autofocus that works modestly well, and you have a camera that can capture some decent action photographs. The autofocus performed well in my tests. Being contrast detection AF, it is not lightning-quick, but in most situations it serves its purpose. Only in low light did it lag in finding focus.

Best of all, there is a Pro shooting mode that offers manual adjustments. Here, you can adjust the color tone, use manual focus, and adjust the exposure. However, the manual focus is adjusted with a slide bar on the touch screen, which is not exactly ideal - especially considering that you don't get any peak highlighting on-screen to help you make your subject sharp. Also, Pro mode offers two customizable selections in its tone menu, where you adjust the color temperature, tint, contrast, saturation, highlights and shadows. In addition, the HDR (high dynamic range) feature is readily available on the main shooting screen and can be set to auto, on, or off. This feature (which is also available in Auto mode) helps bring out shadow details in situations where bright light makes it difficult to capture them without overexposing the shot.

Rather than go overboard with a bunch of rarely used scene modes packed into an overcrowded icon menu, there are simply four modes for capturing still images. In addition to the Auto and Pro already mentioned, there is a panorama mode and something called Selective Focus. This mode captures two shots - one focused on the closest object, and another focused on the background - you decide later. I found this most useful for portraits, adding extra blur to the background to create more impact, but found the foreground blur less useful. To me, those are two very difference shots and I'd like to have the option to set that mode to do just one of the two.

Playback mode offers a wealth of editing options. While in shooting mode you can select one of seven effects. After the fact you can apply one of 25 effects to your photos. In addition, there is a download function for adding even more filters to your arsenal. The same generosity applies to video effects - there are 23 of them loaded on the camera that you can apply in editing. When recording video, however, you still have a few options: the same seven effects available in shooting mode for still images also apply to videos. One little caveat, however: Videos recorded using one of the seven effects looked a little less smooth than those recorded without any effect.

All of this is not to say that everything is serious photography and no fun. The S6 does have a few gimmicky offerings, such as its portrait editing options of enlarging eyes and slimming faces. But at least these are not as severe as those I have seen elsewhere; they leaned toward subtlety rather than garish and cartoonish distortions.

Included in the main menu of shooting modes are Slow Motion and Fast Motion. Rather than simply create a file that plays back at one speed, you get the option to edit the footage, selecting which part of the video you want to slow down or speed up, respectively. This is a quick and easy way to give your home videos that reality TV show impact. However, this quick-and-dirty editing limits the resolution to 1280x720, compared to the full HD default of 1920x1080, and makes the footage look a little grainy.

Also, there is a novel mode called Virtual Shot that is sort of like an inverted panorama - instead of panning the camera around up to 360 degrees, you walk around a small subject to create a photo you can animate, if you will. In playback mode, tilting the camera moves the image so you see the subject from various angles, as if you're walking around it. I found that I could get up to 270 degrees around a subject before recording stopped. In the same way that panoramas are marred by moving subjects the camera cannot freeze, I expected the virtual shot mode to be have a hard time creating a seamless shot of a person. But if the person stood still and did not change expression, the camera created a seamless virtual shot.

On the whole, the camera delivers high image quality. Most of my shots looked sharp and the colors quite saturated. Some of this is undoubtedly due to the camera's wide aperture of f/1.9, which helps it capture light quickly (and thus use a faster shutter speed than with a smaller aperture). In Pro shooting mode, you can increase the ISO setting as high as ISO 800.

Low-light shots I took in Auto mode were captured with settings as high as ISO 1250. In general, though, the camera seemed to default to what in theory was the lowest ISO possible. Often, Auto mode did not choose an ISO setting high enough to freeze the modest shaking of my hand, resulting in blurry details. Some handheld shots taken indoors, with only ambient light, were captured at just ISO 200 or 500, and lacked extremely sharp details or were downright blurry. In other cases where a high ISO was used, the photos looked a little grainy. Not the worst nor the best. The remedy was using a tripod. With the S6 clamped down, photos of a still life (see the Samples Page) look very good up to ISO 800 (the highest setting you can choose in Pro mode), and did not acquire the grainy, slightly smeared look of my handheld shots.

As a result, if I shot with the S6 regularly, I'd use the flash more than I prefer to. Of course, this is a phone and the built-in flash is quite weak, given the small amount of real estate available for a flash unit. If you're seriously considering the S6, I'd consider picking up an adapter to mount it on a mini tripod.

Speaking of accessories, Samsung offers a wireless charger - a disk that you simply set the phone on to charge without having to plug it in. The company touts the phone's ability to charge quickly, soaking up enough juice for four hours of activity in just 10 minutes. In my testing, I recorded 89 photos and three short videos on a single charge. However, this was spread out over eight days during which the S6 was intermittently in sleep mode. For longer battery life, you can use the smart phone's ultra power saving mode.

Bottom line - Samsung has taken a leap forward with the S6, creating a smart phone camera that feels like a primary function - not an afterthought. Fast startup, fast burst shooting, lots of filters and effects and manual adjustments, all make this camera a tool for serious photography and not just for snapshots. Aside from challenges in low light and being saddled with a weak flash - not to mention the obvious lack of a zoom lens - the S6 delivers a lot of photographic punch for a phone.