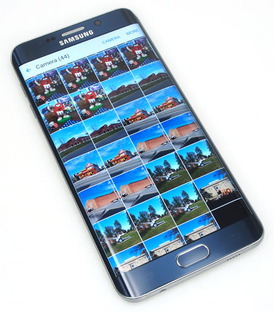 The Samsung Galaxy S6 Edge Plus offers a big "wow" factor. Its enormous, 5.7-inch Super AMOLED screen is extremely bright and offers a 2560 x 1440 resolution that displays very sharp details. The large screen's contoured sides offer an additional element of sophistication, lending an effect similar to the edge of an infinity pool. And, the display is so bright that you will have no problem framing your shots in bright afternoon sunlight.

In the world of smart phone cameras, you could do a lot worse than the this model. In addition to a generous assortment of effects that you can use on both still images and video, you can capture full-resolution images at a rapid 11.5fps - and capture up to 30 of them at once. Video is recorded at up to ultrahigh definition 4K at 30fps.

The Edge Plus wakes up quickly from sleep mode, focuses quickly, and its shutter lag time is short for a smartphone camera - about 0.3 second. Getting to the camera app is thankfully quick. You can press the Home button twice rather than swipe the camera icon on the home screen. And you can assign the volume buttons to trip the shutter rather than having to tap the screen. You also can set the buttons to adjust the digital zoom or start video recording. To shoot continuously, you do not have to change to a burst shooting mode. You simply keep your finger on the camera shutter icon or hold down the volume button.

The auto focus worked well in my testing, and the tracking AF did a good job of keeping track of a moving subject. Contrast detection AF is not extremely quick, but it does the job in most shooting situations. Only in very low light did I find that it had difficulty locking onto a static subject, where it tended to swim in and out. But this was minimal, and only added about one second to achieve focus. As for moving subjects, afternoon shadows challenge its ability to keep a focus lock on a moving target.

Serious-minded photographers will like the manual controls. You can adjust the exposure, select the white balance, choose the metering mode, and select a shutter speed (from 1/24,000 of a second to 10 seconds). This is done in Pro mode. You cannot, however, adjust the aperture - that is fixed (as it is with all smart phone cameras) at f/1.9. This wide aperture helps its performance in low light. Pro mode also offers RAW capture; when turned on the camera captures both a JPEG and a RAW file simultaneously. Manual focus can be used via an on-screen draggable icon, however, you do not get additional on-screen help, such as peak highlighting. In both Auto mode and Pro mode, the camera offers an HDR (high dynamic range) setting, which helps retain details in dark shadows. You can set HDR to auto, on, or off.

Even though the 5.7-inch screen is huge and its resolution is ultra-sharp, you may still fail to notice an out-of-focus shot. For example, on the Samples Page, you will see a photo of a wine glass in the foreground, with a vineyard behind it. Although the wineglass is in focus in this shot, I shot many other frames where the wine glass was slightly out of focus. At the time of shooting I did not notice - I suppose I was too enamored with the highly saturated colors and crisp resolution of the huge screen.

Although the tracking AF works well to keep a subject in its crosshairs, it did not always deliver a sharp shot. In a series of photos taken in a burst of a very active six-year-old in indirect afternoon light, the Auto mode used a shutter speed of 1/50 and a low ISO setting of 64. The result was that most of the shots came out blurry. Had I been using Pro mode, I certainly would have increased both settings to ensure that my fast-moving son's activity was frozen. I got better results when there was direct sunlight also in the frame, and got mostly sharp shots in this lighting, though Auto mode still chose a very low ISO when much of the frame was in shadow. However - and this is a big "however" - you can not shoot continuously in Pro mode. This is a big drawback if you like to photograph a lot of sports or other activities, which pretty much require burst shooting to get that perfect shot.

In addition to traditional video recording, the Home screen offers Slow Motion, Fast Motion, and Virtual Shot modes. The first two are self-explanatory, and they offer the novelty of multi-speed playback: You select a section of Slow Motion video to slow down and Fast Motion video to speed up. This creates a lurching effect that's familiar to us because of reality TV shows, action movie trailers, and the like. The Virtual Shot mode is a slightly different animal: You record footage while moving around an object, usually to about 270 degrees. The playback allows you to tilt the screen to control the viewing angle. Exporting to a computer, however, simply transfers a static JPEG unless you use the share function to export it as a video file.

Speaking of playback, the Galaxy series has one quirk that limits usability. Namely, when you tap on the preview icon in the camera app to view your most recent shots, you can't access albums or pull up an index view of thumbnails. You simply enter the default album, which displays photos and videos one at a time. To see other albums you've created you have to go to the Home screen and use the Gallery app, where you get a grouping of thumbnails. But, even here you can not search by file type, date, or person (there is no face recognition feature to tag photos in this way). To see your albums, you swipe from the left side of the screen, which brings up your album list. When you swipe to move it off screen, the thumbnails rearrange themselves like floating puzzle pieces, which is an elegant little bit of eye candy.

The camera delivers high image quality overall. Most of the time, my shots looked quite sharp and I liked the well-saturated colors. Exposures were accurate, and had a brightness and "pop" you won't get from lesser smart phone cameras. Being able to focus as close as two inches makes for fun macro shooting, though optical distortion was apparent near the edges of the frame in some of my shots. The wide aperture of f/1.9 helps the camera perform well in low light. As you will see on our Samples Page, shots at ISO 800 suffer a little in the fine details, but are attractive overall. Of course, the ability to select even higher ISO settings manually would increase the flexibility of the camera. But in Auto mode, when the camera used ISO 1000 in some of my shots, the noise in some areas got a bit severe (these were, however, taken hand-held at shutter speeds of 1/14 and 1/7 second, when a tripod is highly recommended with a normal camera). That said, having the ability to use an exposure as long as 10 seconds in Pro mode is a great tool for capturing low-light shots.

Video quality was equally impressive. Sharp details, well saturated color, and smooth movement of subjects all made for impressive footage. When shooting indoors, the footage retained the quality of outdoor videos, showing very little in the way of dancing digital pixels, even in fairly low ambient light. I did not find that the video stabilization feature did very much to counter my deliberately shaking hand, but no smart phone I've reviewed ever has.

In lieu of an optical zoom lens, the S6 Edge Plus offers 8x digital zoom. But for all practical purposes, it just isn't practical. Even in the on-screen preview, at high magnifications the drop-off in quality is obvious. All you are doing is cropping your photo when you take it, blowing up a small section of the frame. Only a real optical zoom lens can magnify in this manner. Digital zoom simply introduces ugly digital distortions.

The Galaxy S6 Edge Plus is compatible with the company's adaptive fast chargers, which promise faster recharge times than standard chargers. The company also offers wireless recharge units. The phone also has an ultra power saving mode to help the Li-ion battery last longer. In my testing, the battery held up well. I was able to capture 336 still images and six short videos on a single charge. I was only using the camera function and had not enabled Wi-Fi.

Bottom line - The Galaxy S6 Edge Plus offers a lot more than just the "wow" factor of a huge high-resolution screen. It gives photography a priority, offering quick access to the camera, minimal shutter lag, very fast burst shooting, and lots of manual controls. The generous assortment of filters and effects are well done - and you can download many more. Low light performance is good, though you will probably wish burst shooting could used with the Pro mode manual controls. Playback functions are not the most sophisticated, but still, in the world of smart phone cameras, this one really shines.