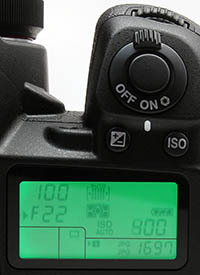 On the top right of the camera you will find one of the two command dials along the front. Above it is the power switch coupled around the shutter release. On the bottom half we have the exposure compensation button, ISO button and lighted information screen.
On the front of the camera along the base of the lens, Pentax has placed a few more controls that are easily accessed by the same hand that use to control the lens. At the top is the button to activate the built-in flash unit. Next is the X-Sync socket for the control of external flash units. The RAW/FX button is an assignable button that is easy access with your thumb. At the bottom are the AF mode button and AF/MF switch.

On the back of the camera are plenty of control options, but they are well placed and easy to use. Starting at the top is a command dial, AF button and AE-L buttons. Next the green button resets a setting that you are adjusting and activates ISO auto when changing the ISO settings. The next switch changes the camera from still image to video capture mode. The 4-way controller offers shortcuts to the burst/self-timer, color, flash and WB settings as well as allowing you to navigate the camera menus. Along the bottom are the INFO, Menu and Change AF/Change card slot buttons.

On the left side of the camera you will find all of the camera's I/O ports. At the very top is a MIC input for increased sound quality, USB 3.0 port, HDMI output and power input at the bottom.
So that you will never have to worry about running out of space on your SD cards (depending on your cards), Pentax has included dual card slots. The camera can handle two UHS-1 SD/SDHC/SDXC memory cards, allowing even photographers that shoot events mostly in burst mode to get by without having to change cards all the time. The camera is shown here with the Sony 32GB UHS-1 SDHC memory card that was used to test the camera.
Powering the K-3 is a 7.2V, 1860mAh rechargeable Li-Ion battery. This battery is capable of supplying enough power for up to 720 images with the EVF and flash off or 370 minutes of playback time. Also included with the camera is the quick battery charger shown above.
To double the battery capacity, Pentax offers a dual battery grip (BG-5). The grip also features a vertical shutter release, AF button, depth-of-field preview and more.
For low-light shooting, Pentax offers several external flash units that attach to the camera's hot shoe. These flashes are much more powerful than the built-in flash. Some, like the AF540FGZ II (shown above) also feature a LED video recording light as well.