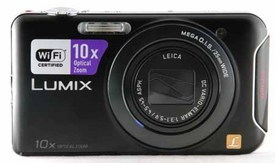 The Lumix SZ5 is the latest addition to Panasonic's Advanced Stylish series of compact cameras. It is aimed squarely at the sharing generation, with a dedicated WiFi button and the capability to communicate with a smart phone. In most other areas it is a pretty basic affair, designed to make snapshots a breeze with automatic controls such as intelligent scene selector, intelligent ISO control and shake detection. The main recording menu offers just four icons: iAuto mode, normal shooting mode, scene mode, and miniature effect. There is very little in the way of manual controls on this 14-megapixel point-and-shoot, though what's included offers a fair amount of adjustments for casual shooting.

The most interesting feature here is the built-in WiFi (802.11b/g/n). You can set up the camera on a WiFi network to transfer images to a PC and upload them to social networks such as Facebook and YouTube (you'll need to install the Lumix Image Uploader on your Windows XP/Vista/7 PC to do so). For smart phone connectivity, you download the free Lumix link application to your smart phone (iOS and Android). The app allows your smart phone to control the camera, both as a remote control to trip the shutter (instead of using the camera's self timer function). The camera does not have its own GPS, but you can use your smart phone to geo-tag images and save the GPS information to the camera. Panasonic also offers a cloud service called Lumix Club that can synchronize photos and videos on compatible electronic devices.

In shooting mode, pressing the WiFi button brings up WiFi setup, remote control, and smart transfer. In playback mode it also brings up icons for send image, wireless TV playback, and wireless print. You'll need a DLNA-compatible TV to wirelessly display your images on it. If you don't have one, you can opt for the standard definition AV cable (not included). The WiFi strategy is interesting given how prevalent the use of smart phone cameras has become, aimed to marry the higher image quality of a 14-megapixel camera with the ease of sharing with a smart phone. Of course, data rates apply when uploading to the internet from your phone.

One possible limitation is the wireless range of the camera. The camera was unable to find my wireless network from the same location that two computers operate with excellent reception, roughly 30 feet from the access point, separated by a few walls and a stairwell. I had to move closer to establish the connection. Though the camera found my network, and set up the access point, my setup failed with an error of "no destination found."

The DMC-SZ5 is slim enough to slip into a shirt pocket, with a brick-like shape lacking contours that might help you keep a firm grip. The back of the camera has a typical assortment of buttons and a four-way control. The most helpful is the Q menu, or quick menu button, which launches commonly changed settings: file size, ISO, white balance, AF mode, burst mode, video recording quality, and LCD mode. You don't get a lot of manual control over your shooting: there is no aperture-priority or shutter-priority mode, for example. Nor do you get any fine creative filters to apply while shooting - you are pretty much limited to the color modes (standard, monochrome, sepia, vivid, and "happy"). This "happy" setting takes the place of vivid color mode in the iAuto shooting menu. Like the WiFi sharing features, this tells you a little about this camera's target market.

Similarly, image editing within the camera is as basic as it gets, offering only an auto retouch function, which you select with the four-way control. Because the camera has no dial, all navigation must be done with the four-way control. This isn't much of a problem when changing settings because they are so few, but it can get cumbersome when navigating images in playback mode. Thankfully, you can quicken the pace by using index views of 12 or 30 images, or filter playback by category such as favorites, videos, or by scene mode: portraits, landscapes, sports shots, etc. There are also a few playback effects, given names like swing, slow, and urban (which sometimes displays an image in black-and-white).

The LCD can be set to one of three modes via the quick menu, which can help you see the display in bright light. Auto Power LCD adjusts the brightness automatically; Power LCD makes the screen even brighter; and High Angle brightens the screen to make it easier to see when holding the camera far from your eye, at an angle. The 3-inch screen has a resolution of 230,000 dots, which is run-of-the-mill in terms of sharpness, but the brightness modes make it very usable for most shooting situations.

The iAuto mode performs well to adapt to a variety of subject matter and situations. For example, the camera detects automatically when you are taking a close-up, and will select macro mode to ensure you can lock on focus. In normal picture mode you need to select macro yourself via the four-way control to avoid a blurry shot.

There are three burst modes. The basic burst mode shoots full-resolution files at 1.3 frames per second. This won't break any speed records but at least it can take pictures until your memory card is full, though the burst speed will become slower at the halfway point, according to the manual. You can perform continuous shooting using the flash with this camera at roughly the same speed (1.2fps), though images are recorded at 3MP. High-speed burst records images at the same low resolution (which is still plenty for a 4x6 print), but does so at a very fast 9.1 frames per second. In all cases, the focus is fixed at the first frame, which is quite a disadvantage particularly in high-speed burst mode, when you might reasonably expect to be recording fast moving action in need of AF tracking. You can use AF tracking, however, when shooting single frames, as well as face detection AF, 23-area AF, and one-area AF. You can change this via the quick menu.

Considering the size of the small flash, it would be unfair to expect it to cast about a lot of light. It works well within a roughly 10-foot range and basically peters out about 15 feet. This is good enough for people shots in your subjects, and can fill a small-to average-sized room with adequate light.

The bottom line here is you will want to use the flash for low light shots. Although the camera has an ISO range of 100 to 1600, and an i.ISO setting for letting the camera automatically select the light sensitivity, indoor shots can suffer from a lot of digital noise and chromatic aberrations. That Panasonic website shows an example of an indoor shot taken without flash and a shutter speed of 1/10 second. But it looks to be an interior with a fair amount of afternoon light coming through large windows. My experience shooting indoors at night with only light bulbs as a light source produced much less pleasant-looking results. Many of my shots were blurry, for one, at the aforementioned 1/10-second shutter speed, and the backgrounds were speckled with chroma digital noise. The only remedy was to resort to flash, which at least made people in the foreground look attractive, even if the background still suffered from a lesser amount of digital noise.

In the image quality category, the lack of finesse at high ISO settings is not exactly surprising, though still disappointing. The big disappointment here is the low image quality even at full resolution in afternoon sunlight. Take a look at image P1000154 on the Sample Photos page. It was taken in Landscape mode at an undemanding focal length of 69mm, yet the image lacks sharp details throughout the photo (the grapevines in the foreground look sharper). I might have simply chalked this up to a bad autofocus decision, but image P1000140 shows the same consistent lack of sharpness on distant objects and digital noise throughout. Where the camera performed best was on close-ups, but even here, in image P100083, you will find fuzzy edges and a background speckled with digital noise.

The same digital noise can be seen in the videos, though constant movement helps to distract you from it. The video quality is adequate, considering the 1280x720 resolution. It's certainly convenient that because the videos are recorded in MP4 format, the video files appear in the same folder as the still images and can be transferred easily to a computer without having to use specialized software to convert them. But given the lack of clarity that's noticeable at full-screen on a 27-inch display, playing the videos on a TV of a larger size might be of questionable enjoyment (whether via WiFi or AV cable).
The battery must be charged in the camera, so if you switch to a second battery, you can't charge the first one while you continue shooting. Considering that battery life is rated at a modest 250 pictures, this could potentially be a problem, especially with the fact that heavy use of the WiFi features drains the battery quicker than expected (though we did not test this specifically with this model, in the past we've seen noticeable decreases in battery life when using the WiFi or GPS functions of a camera).
Bottom line - The WiFi features of this otherwise basic point-and-shoot camera are ushering in a new playing field for bargain cameras aimed at smart phone fanatics looking to improve the photos they pervasively share. At this price ($199 USD or less), you get a lot in the wireless department, but otherwise this basic snapshot camera lacks the image quality or sophistication to make it much of a draw.