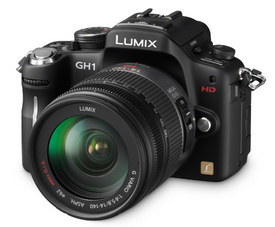 Another upgrade the GH1 has received is an all new kit lens that not only offers their MEGA O.I.S. stabilization system, but has also been optimized for HD video recording with the ability to use continuous AF in movie mode. The LUMIX G VARIO HD 14-140mm/F4.0-5.8 ASPH./MEGA O.I.S. lens was designed specifically for use with the GH1, and like the camera body itself, is rather compact for a 28-280mm (equivalent) zoom lens. This is a very nice "starter" lens, which offers a much more versatile zoom range (approx. 10x) compared to your typical entry-level dSLR kit lens; which are usually equivalent to a 3x zoom. If you'd like to use some of your existing standard 4/3 glass, Panasonic does offer the DMW-MA1 lens mount adapter. The only draw back is that several of the lens functions might not be usable, like Continuous AF, etc. When the G1 was originally announced, there were very few Micro 4/3 lenses available. That's not the case any more, as both Panasonic and Olympus have a great deal of M4/3 lens offerings available.

Since the GH1 is simply an upgraded G1, the body ergonomics are almost identical. The only changes you will see are the added Movie mode shutter release button, and the GH1 and HD badges on the front. This compact interchangeable lens system fit well in my large hands, with all of the controls comfortably placed on the body. Because the GH1 is a mirror-less camera, you frame you photos using a live image fron the image sensor using either the high-resolution (1.4M dot) EVF or the 3.0-inch (460K dot) rotating LCD. Panasonic still refers to the EVF as a Live viewfinder or LVF, however they are one in the same.

One feature we especially liked about the G1/GH1 was the sensor located next to the EVF. It triggers the camera to automatically switch the live image to the EVF when you bring your eye up to it. Our performance results from the GH1's monitors were identical from its predecessor. Both displays offer an amazingly clear and bright picture, and worked well in various lighting conditions. The LCD can be rotated up to 270 degrees, giving you the ability to capture images that would be quite difficult with a typical dSLR or consumer point-n-shoot that feature a fixed screen. With the GH1, you can easily shooting over a large group of people, capture a self or couple portrait, shoot from the hip, etc. I personally liked using the rotating screen when using the GH1 with a tripod; no more bending over to look into the OVF to frame a shot.

The menu system hasn't changed much either. While many of the camera's functions can be accessed via a dedicated button, there are still various options you have to enter the menu to toggle. I found it was very easy to navigate the menu to find the function I was looking for. Panasonic also included a Fn (Function) button on the back that can be customized to control various options. The default settings is metering, however you can change it to control I.Exposure, Image Quality, Aspect Ratio, Guide Lines, etc.

The GH1's shooting performance was impressive, capturing an image with in just 1.5 seconds from flipping the power switch. Shutter lag is almost instantaneous (under 1/10 of a second) when the camera is pre-focused, and only 1/10 - 2/10 of a second including autofocus time, depending on the amount of focus change required by the lens. In single shot drive mode, I was able to capture an image every 8/10 of a second without the flash, or between 9/10 - 1.5 seconds with the flash. When shooting in burst mode, the GH1 was able to take 15 images in just 4.5 seconds (approx. 3.33fps), which just surpasses Panasonic's claim of 3fps. The above times were using Large/High quality JPEG mode. When shooing in RAW mode, I saw almost the same performance, however the frame depth dropped due to the larger file sizes. All of these tests were done using an OCZ Class 6 SDHC memory card, iAuto or Program mode, ISO auto, Large/High JPEG quality, flash off and all other settings at the factory defaults unless otherwise noted.

The DMC-GH1 is loaded with manual exposure options, however at the same time, there are loads of user-friendly options too. We actually used the iAuto setting for most of our photo tacking needs, and found that this intelligent exposure mode performs very well. It's able to accurately, and quickly detect the subject being framed, and adjust the appropriate settings accordingly. One can truly pick the GH1 up, and start capturing beautiful photos using iAuto, regardless of their photo taking experience. This mode was also able to keep the ISO settings low, ensuring we capture relatively noise free images.

Our image quality results were also similar to the G1's, since they share the same image sensor, metering system, and image processor. The only differences worth noting are the fact that we are using the new 28-280mm (equivalent) zoom lens, and our outdoor photos were captured under difference lighting conditions (afternoon fall skies compared to winter skies with the G1). Overall, the GH1 was able to produce sharp images throughout the aperture and zoom ranges, with good exposure. The photos we captured also show very natural color representation, as our subjects look just as they did with our own eyes. I especially like the added framing capabilities of the new kit lens, which offers good focal coverage for a wide variety of shooting situations; from groups shots to close-ups of distant subjects.

Much like its predecessor, the GH1 handles imager noise quite well. I feel that the camera has the ability to produce usable photos for small to large size prints all the way up to ISO 1600. While I would try to keep the ISO set to 800 and below, 1600 is still quite usable in my opinion. The camera does also offer a ISO 3200 setting, however our sample shows strong speckling and detail loss across the entire frame.

Unlike most dSLR models that feature a phase detection auto focusing system, the G1 and GH1 employ a 23-point contrast detection system, much like one would find on a consumer point-n-shoot. The GH1's AF system worked well in various situations, with quick and accurate focusing, even in marginal lighting thanks to the AF-assist lamp.

The most notable addition to the GH1 over its sibling is the ability to record either 1080p or 720p HD video. Unfortunately, due to a brief loan period from Panasonic, we were not able to spend as much time as we would have liked testing the GH1's video capabilities. The various short clips we captured using the AVCHD FHD (1920x1080) setting were decent. If you plan on viewing them on your PC/Mac, you will need some robust hardware, as they were intended to be played back on a HDTV set using a HDMI cable. The built-in stereo microphone was able to produce good-quality sound, however it did pick up the slightest breeze when shooting outdoors. The GH1 is one of few dSLR type cameras that can use continuous AF in video mode. This function seemed to work well when zooming, and panning with some slow moving subjects, however we were not able to test it with some faster moving objects.

Bottom Line - we enjoyed using the G1 when we reviewed it earlier in the year, and using the GH1 only brought back fond memories of its predecessor. This camera can capture pleasing photos in a variety of shooting situations, without ever having to take the camera out of iAuto mode. The GH1 also performed quite well in the shooting performance, and ISO categories, making it a very pleasing model. The new kit lens will be something to be desired by G1 owners, with a much broader focal range that offers more farming and photo opportunities. I was hoping to have spent more time working with the GH1's video recoding options, especially since the addition of the 1080p and 720p video modes were the main new features on this camera. That said, if you were interested in the G1 when it was announced late last year, the GH1 will be even more tempting. With all the same features, quality, and performance of the G1, but with a nicer kit lens, and the addition of a usable HD video option, Panasonic has really added to appeal of this camera. With an MSRP of US$1499.99 though, the GH1 carries a lofty price for the added features over the G1 (MSRP: US$799.99); just $100.01 shy of double the price.

Panasonic posts a firmware update for the DMC-GH1.

Please Visit Panasonic's Support page for more information on how to download and install this new update.