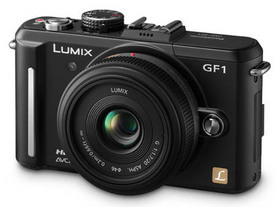 Panasonic's Lumix GF1 is their third Micro 4/3 system camera, featuring the same 12.1-Megapixel Live MOS imaging sensor, Venus Engine HD and 23-Area AF system as the previous GH1, but packed into a smaller, more compact housing. The new body shape is similar to the Olympus E-P1/E-P2 body, giving the camera a stylish and retro look. The GF1 also includes High-Definition 720p video capture, a slew of preset scene modes including intelligent Auto (iAuto), a one touch video record button and a completely hidden pop-up flash that maintains the look of the camera when closed. With shooting modes from iAuto all the way to full manual, this camera is capable of being as easy to use as an entry level point-&-shoot model, or as complicated as a mid-level dSLR.

With the smaller body, the GF1 had to sacrifice a few of the top features that can be found on the GH1. The EVF (electronic view finder) has been removed but not forgotten, allowing for the retro shape. Panasonic has created an optional EVF accessory that mounts onto the hot-shoe of the camera for those that prefer an EVF to the LCD. With the loss of the EVF, the camera has also lost the automatic sensors that allowed the camera to switch from EVF to LCD and back automatically. As with the GH1, the GF1 is offered with new lenses. For the price, you have an option of a 20mm, f/1.7 pancake lens or a 14-45mm, f/3.5-5.6 zoom lens. Neither of these lenses compare to the versatility of the 28-280mm lens that came in the GH1 kit, however we did enjoy using the 20m pancake lens during our testing.

When using iAuto, the camera will automatically select the exposure settings for your current shot as well as choose the correct scene mode that best fits your subject (like landscape, portrait, etc.). This allows you to focus more on framing your image and not worrying about the camera's settings. While in the iAuto mode, the camera will automatically activate 7 different camera functions to ensure the best quality image for the situation. These 7 features or functions are:

Face Recognition: The camera has the ability to recognize faces that have been stored in the camera's memory. When these faces are found, the camera will display the names of the identified individuals. Up to 3 faces can be recognized at a time. This will allow the camera to optimize for these faces over any others in the image.

AF Tracking: This feature allows the camera to keep your subject in focus, even as it moves, as long as it stays in the frame until you press the shutter release.

Intelligent Exposure: This will correct the brightness in dark areas of an image due to difficult shooting situations, such as back lighting.

Face Detection AF/AE: The camera will detect when there is a face or faces within the frame and adjusts the settings for these faces.

Intelligent ISO Control: The camera will adjust the ISO based on your subjects movements to avoid motion blur in your images.

MEGA O.I.S.: This optical image stabilization feature is not built into the camera, but into the lenses that attach to it. Therefore it is only an option with a capable lens. (The 20mm lens included with the GF1 kit does not include this feature.)

Another sacrifice of the new retro look, is how the camera fits into your hand. Panasonic has added a grip on the front right side and a thumb groove on the back, allowing for easy one-handed operation of the camera. Although it is easy to use, it is not as comfortable to hold on to as the GH1, with the modern body style. The smaller body still features all of the on-camera controls from the previous model, in a new and easy to use arrangement. The style and ease of the menu system has also been carried over, allowing the user to find and change any of the camera's many settings with ease. Viewing and framing your images is completed via the camera's 3.0-inch, 460,000 dot, LCD screen. This is an outstanding screen, featuring 7 levels of brightness and a full 100% coverage of the field of view. During our tests, we had no problems viewing the screen in all lighting conditions, including bright and direct sunlight.

Performance from the GF1 does not disappoint. From the time you press the power switch, the camera is able to capture its first image in just 1.3 seconds. When the camera is pre-focused, the shutter lag is well under 1/10 of a second, and ranges between 4/10 and 6/10 of a second when allowing the auto-focus to work. In single shot mode, the camera's shot-to-shot delay is approx 0.74 second, or 1.58 seconds when using the flash. There is also a burst mode, that can be set to either high or low speed, depending on your needs. High speed mode was able to capture 10 images in just 3.2 seconds, which slightly surpasses Panasonic's claims of 3fps with 3.125fps. Low speed slows the camera down to 10 images in 4.7 seconds or 2.13fps. All of our tests were completed using a Lexar Pro 133x, 2GB SD memory card, ISO auto, iAuto, flash off and all other settings at the factory defaults unless noted otherwise. Times may vary depending on lighting conditions, camera settings, media, etc.

Continuing in the footsteps of the previous Lumix G models, the GF1 provides excellent image quality with vivid, yet realistic colors. As you look through the images, you may notice that the dark tree branches and power lines that are set on the light blue skies tend to have a purple tint to them (chromatic aberrations). Although they are not bad, they are still noticeable when looking through your images at 100%. Framing our usual sample images was difficult with the 20mm (35mm equivalent of 40mm) kit lens that we were provided with. Although the 20mm is fixed and not very versatile when it come to framing, it does have big advantage, its ability to shoot in low-light situations without a flash. If a fixed lens is not something that you are interested in, the GF1 is also available with a 14-45mm lens that will provide more versatility.

Our indoor M&M man shots make it really easy to see how sharp the images are from the GF1. The images were taken using the Program setting on the camera, which selected f1.7 as the aperture for most of the images. This left parts of the image out of focus, and is the only reason, raising the aperture would have brought the rest of the image into focus. F1.7 allowed the camera to use a shutter speed that could have been hand held for almost all of the images, which provides a big advantage over most cameras in low-light situations. When viewing the images at 100%, you can see how easy it is to read the magazine titles. Even the stitching in the flag and the bumps on the football are easily visible. Noise within the image isn't even noticeable until you reach ISO 800, where it slowly begins to become more defined as the ISO goes up. ISO 1250 is last really usable setting, ISO 1600 and up really show a lot of noise, which will be noticeable in prints.

Panasonic has made portrait photography incredibly easy with its Face Detection and Face Recognition software. When these features are turned on, the camera detects and tracks faces very quickly and reliably, as long as the camera can see even part of the face. All of the camera's settings are then adjusted to the faces that were detected within the frame. Face Recognition allows you to store faces within the camera's memory. The camera can then recognize a specific face and give that face priority over any others. This settings allows the GF1 to recognize up to 6 of these faces at any given time, and will even display the names given to the saved faces. The powerful built-in flash (GN 6.0) did not produce any instances of red-eye in our portrait shots, even with the red-eye removal flash setting turned off. We only ran into a problem with the flash when shooting macro shots, as it was just a bit too strong.

The GF1's 720p movie mode provides you with a high quality video recording, surpassing the movie quality that you will find from any point and shoot digicam. Although it may fall a little short of some higher end consumer camcorders, it has one advantage that they do not. Thanks to the interchangeable lenses, you will be able to manipulate depth of field in your movies, something that only prosumer and professional video cameras could achieve until video capture was added to dSLR cameras. The biggest feature for recording movies, is the cameras ability to continually auto focus while you are shooting. This is a feature that is just popping up on some newer dSLR cameras. While you will not have to manually focus the lens to keep your subject in focus, the built-in mic will pick up some noise as the internal motor focuses. Using the f1.7 20mm lens, we were able to capture movies that were very sharp and clear in a low-light setting. These movies play back very smoothly, both on a computer or running through the camera onto a HDTV via an HDMI cable. The only issue we ran into is the camera's built-in mono microphone. This mic is a step down from the stereo mic that is found on the GH1. It is very sensitive and picks up any background noises around the camera, which you can hear in our sample movie. The lack of a microphone input is also disappointing and makes it much harder to shoot high quality movies with good sound.

Powering the GF1 is a 7.2V, 1250mAh rechargeable Li-Ion battery. This large battery allowed us to capture over 350 images on a single charge while completing our tests. This supports Panasonic's claims of being able to capture up to 380 images on a single charge according to CIPA standards. Although the battery life is very good, if you plan on taking a long day, weekend or more for with the main purpose of shooting, you will want to have another battery as a backup. This is easy to do with the included battery charger.

Bottom Line - The Panasonic Lumix GF1 is another outstanding addition to the Lumix G line of Micro 4/3 system cameras. Although it is a step down from the GH1 in features, it is a little cheaper and still full of useful features, making it very attractive. Not to mention it's quite a bit smaller. The camera's image quality and performance are excellent, allowing it to perform with dSLR cameras that fall into its price range. One big advantage that the GF1 has over these dSLR's is its size, since it doesn't have a mirror to operate, the camera is much smaller and easier to carry. With a MSRP of US $899.95, this is an excellent option for anyone looking for dSLR performance and quality but don't want to lug around a big camera.