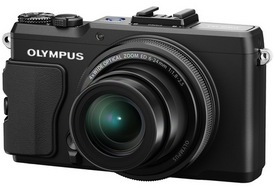 Bringing a new level to their compact point-n-shoot camera line, the Stylus XZ line by Olympus offers increased image quality and capabilities, which can easily be seen in the Stylus XZ-2. While it is not the smallest camera available, it is much more compact and easy to carry than a dSLR or ILC but still sports many of the same features and capabilities. It is powered by Olympus's TruePic VI image processor, the same one that is found in their dSLR and ILC cameras, which produces its brilliant images (both color and clarity) and also allows the camera to use its powerful multi-exposure shooting modes and great burst shooting performance. Combining this with the 1/1.7" 12-Megapixel Backside Illuminated CMOS image sensor gives you Olympus's iHS system. This sensor improves low-light performance and image detail with less noise. Further improving the camera's speed and low-light performance is the 4x optical i.Zuiko lens.
Once the XZ-2 has been set up for use with the Flash Air memory card, sharing your images with a smartphone or tablet is very easy to do. The WiFi enabled card allows iOS or Android devices to connect to the camera to view the images that are selected to be seen. The Olympus Image share program controls the connection and also allows you to add art filters, not only to the images that you download from the camera, but also to any other images that are saved on your device. Compared to some of the other camera's that we have seen with built-in WiFi capabilities, this seems to be the most primitive. Some of the other cameras also allow other features other than just seeing the images that are saved on the camera. *Olympus is currently offering a free Flash Air card with the purchase of the XZ-2, click here to get yours.
The XZ-2 is very easy to handle thanks to the back thumb grip and removable front finger grip. With the grip on, which we found to be much more comfortable, there is plenty to hold on to. This gives you the confidence to wield the heavy camera in any situation. While it is a bit heavier than most compacts, it has a very sturdy feel that you will like.

Automatic exposure control is like any other compact camera, with fast and easy point-n-shoot capabilities, but it's the manual controls of the XZ-2 that were really fun to use. Featuring a command dial on the back and the first ever hybrid control ring on the front around the lens, full manual control is easier than ever. The front lever changes the camera from manual to autofocus so that the control ring can be used to control shutter speed and focus at the same time. In other modes, the control ring and two Fn buttons can all be set to control any of the features that best suit you.
Framing and composing your images is accomplished with the camera's 3.0-inch, 920,000 dot Touch LCD screen. Its incredibly high resolution provides you with a great amount of detail and color reproduction. You will love this when viewing your images in the field or checking for focus. The screen itself is very sensitive and works very well. It is missing some of the features that you will find on most touch screen phones, such as using two finger features to "pinch to zoom", which may slow you down if you are used to using them. Finally the screen also tilts up and down to assist you in tough shooting situations or to remove glare from the screen. In bright situations you can also adjust the brightness of the screen to make sure that you have no problem seeing what is on it.

For those looking for a more traditional feel, there are several optional electronic viewfinders (EVFs) available that will fit into the camera's hot shoe and accessory port. This will give you a traditional 35mm camera feel and still show you all of the information that you see on the LCD screen.
Looking at our outdoor images, the overall quality is excellent. Great exposures and sharpness leave us with an image that we are definitely happy with. Aberrations have been well controlled in the high-contrast areas of the image, and there is very little noise in the low-light and shadow areas. Our samples were shot in both Program and iAuto shooting modes. We did not see much of a difference in most of the images. There was a much higher contrast in the iAuto cannon shot vs. the Program shot, and the Program images did look to be a little sharper than the iAuto images. Composing your images is accomplished the 4x optical i.Zuiko lens. With a 35mm equivalent of 28-112mm, it has good versatility geared for wide images and portraits. It does lack a little on the telephoto end. Sporting a maximum aperture of f/1.8-2.5, it fares incredibly well in low-light situations as well as producing brilliant bokeh (soft blurry backgrounds), a feature that is found mostly with dSLR or ILC cameras.
Our indoor image samples show amazing image quality at the lower ISO settings. Starting at ISO 100, the image is incredibly clear and sharp, giving us an amazing amount of detail for a point-n-shoot camera. Also not normally found on a point-n-shoot is the ISO settings down to 1/3 stop increments. This allows you to keep the highest quality possible. At ISO 800 is when the noise starts to become noticeable in the image and really fine details start to disappear, but still gives you a good, printable image. The noise slowly increases as the ISO rises, but it is not until ISO 3200 that it really becomes a problem. Once you get this high, most of the small details are gone and it starts to look like an old cell phone image.

Assisting with your low-light images is a small pop-up flash unit. The flash will not pop up on its own, so you will have to do it manually, which can slow you down a little, especially for candid shots. We did have several samples where the flash completely blew out the image, and other times the exposure with the flash was excellent.
Portrait photography with the XZ-2 is very easy, thanks to the face detection software. Even with a group of kids running around, the camera was able to detect and follow all of the faces within the frame. Exposure and color are excellent, based on the faces and not the rest of the environment, making sure that the people in your images are what shows the most. We did not see any redness in the eyes of our subjects when the flash fired, but even in iAuto mode with the flash charged and ready, the camera opts to shoot without it whenever possible. While this keeps the image looking exactly how you see it, it can raise the image noise when the ISO gets too high.
We also checked out a couple of the special shooting modes, both of which are supposed to put the image processor and burst shooting to use. We started with the multi-exposure mode, allowing you to capture two images that are then superimposed over one another. This is a fun and creative shooting mode, however, there is no way to adjust the final outcome of what you photograph. Second we played with the Backlight HDR function very unsuccessfully. In all of our attempts the camera would only capture one image and then process. Every time it resulted in a dark subject or blown out background; not any different than shooting normally. Finally we took a look at all of the art filters offered on the XZ-2. These filters are creative effects that can be applied to change the overall look of the image. Samples of these can be seen on the samples page.
Video capture is another great feature, thanks to the high quality image sensor and low-light capabilities of the camera. This lets you capture higher quality movies than most compact camera, as there will be less noise and artifacts in your movies; especially when shooting in less than perfect lighting. Our sample played back very smoothly when connecting it to a HDTV with a HDMI cable via the camera, but was not quite as smooth when watching it on the computer. Audio for your movies is captured with the on board stereo microphone. It is small and sensitive, and will mostly pick up the sounds that are closest to the camera. Olympus does offer an adapter and microphone that plugs into the hot shoe and accessory port for improved audio quality.
Powering the XZ-2 is a 3.6V, 1270mAh rechargeable Li-Ion battery. This battery had no problem allowing us to capture over 130 images and several videos, as well as our Flash Air tests, on a single charge. This makes the 310 images that Olympus claims it can capture seem more than possible, if not more. Charging the battery is done inside the camera, by just plugging it in via USB and the included adapter. This may seem easier until you try to keep a second battery charged and on hand. If you have more than one battery, you will want to get a charger to go with it.
Bottom Line - The Olympus Stylus XZ-2 is a powerful and compact alternative to carrying around a large dSLR or ILC camera. With it's larger 12-Megapixel High Sensitivity BSI CMOS image processor, TruePic VI processor and the 4x optical zoom lens with a maximum aperture of f/1.8-2.5; the XZ-2 delivers image quality that is much higher than you will find on most compact digicams. Its performance will also blow away most other compacts, giving you a true compact powerhouse. With a MSRP of US $599.99, you do pay a little more for the quality and performance, but if you are looking for compact versatility and outstanding image quality, this camera will be hard to beat.

You can check out the price of this camera on Adorama by clicking here.