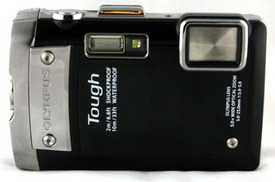 This latest model in Olympus's Tough series is built to battle the elements and live to tell the tale (and show the photos to prove it). Being waterproof up to 33 feet deep, the TG-810 is a good candidate for snorkeling or other water sports. Its rugged metal body is able to withstand more than a six-foot drop, temperatures down to 14°F, and pressures up to 220 pounds.

The 14-megapixel camera features a 5x wide-angle optical zoom, which is well-suited to vast landscapes, and there is a dedicated video button that makes it easy to record HD video without having to navigate menus to a movie scene mode.

The TG-810 has a lot of very attractive features for outdoorsy types. The inclusion of GPS, an on-screen compass, and a nanometer top the list. The camera uses sensor-shift technology to combat camera shake, and also shoots at up to ISO 1600 to help capture a sharp images; even in low light conditions.

The camera does a good job of not being intimidating to newbies by offering a dedicated button for photography tips and information on the camera's features.

However, you do pay a premium for the ruggedized body of this model. The high price, and the fact that the brick-like body feels bulky in a pocket, makes it a much better fit for the sports-enthusiast than for taking casual snapshots.

Battery life is rated at 220 shots, but your experience may vary widely, depending on whether you enable or disable some features, such as GPS. With GPS turned on, I was disappointed with how quickly the battery drained. In one instance, after a full charge, the low-battery warning turned on after just 71 photos and half a dozen videos of 10 seconds or less. But with GPS and image preview turned off, I was able to take 315 shots (most of them without flash) and still the battery meter showed it had a full charge.

Another potential battery-draining hazard is a feature that allows you to use the playback button on the back panel to power on the camera. I am not convinced this is much more convenient than using the on/off button beside the shutter button ― and it definitely poses the possibility that the camera will get turned on accidentally when in a pocket or bag; as happened to me. A similar potential accident on the back panel is the "?" button, which offers a lot of information about the camera and offers many tips for taking photos in a variety of situations. However, when the camera is turned off this button pulls up the compass on the LCD ― another potential accident waiting to happen that could drain your battery.

This is problematic in itself, but what makes it more so is that the camera does not come with an external battery charger. As a result, you must leave the drained battery in the camera and plug the camera into an electrical outlet ― so even if you had an extra battery (not included with the camera), you could not use it and charge a dead battery at the same time. The included charger plugs into the camera's mini USB port with the included cable.

This camera offers a healthy number of shooting features, including many scene modes and effects. It can make 3D images for displaying on a 3DTV or monitor; other effects include approximations of a watercolor painting, a pinhole camera, a drawing, and a fish-eye lens. An effect called pop art seems to simply brighten the colors, while punk creates a duotone of hot pink and black.

All in all, I found that these effects work as promised, but they're largely gimmicks that are unlikely to get much use once the novelty wears off. One disappointment was the cuisine mode, which I used at night indoors. This mode used flash by default, under which the food did not look attractive. It looked much more attractive with the flash turned off, which caused the shake warning to appear and the shot to look blurry despite the camera's ability to use light sensitivity as high as ISO 1600.

The shooting modes, by contrast, are helpful. For example, the backlit mode worked well to force the flash on portraits when people's faces were in shadow, producing better results than when I used Program mode, and the flash did not fire.

One of the more unusual modes offered by the TG-810 is beauty mode. Overall, I also found this mode to be little more than a gimmick. In photographs of people with noticeable wrinkles or blemishes, this mode resulted in some artificial-looking blurred areas on skin. In other photos taken using this mode, however, the effect was hardly noticeable.

I was more pleased with the panorama mode, which has three options: auto, manual and PC. In auto, rather than lining up your next shot with the right-side section of the previous one, you line up a dot with a target spot, and the camera takes the picture without you having to press the shutter button. I found this easier to use than the traditional lining up of the images.

On the plus side, Auto mode allows you to move left or right to create your panorama. The preview of the panoramas is attractive: it blows up to fill the whole LCD screen and pans slowly left to right and back again, rather than shrinking down the entire panorama to fit on the screen, which is less helpful for image review.

On the downside, Auto and Manual panorama modes limit you to three images and don't capture full-resolution images. In PC mode, the camera does not stitch the images together, and leaves them as separate images for you to combine on your computer. This doesn't offer the immediate gratification of the other panorama modes, but it enables you to capture full-resolution images. For example, in Auto and Manual modes the camera created a three-photo panorama of roughly 4000 x 1000 pixels at 200 dpi. In PC mode a single shot measured roughly 4000 x 3000 pixels at more than 300 dpi.

The other advantage of the PC mode is that it does not limit you to three shots for your panorama, which the other two modes do. Also, it gives you a chance to accurately stitch together your panorama--though the camera's automatic stitching worked well on sweeping outdoor vistas, trying to do the same thing with closer subjects in a room resulted in obvious seams between the images and mismatched edges.

Because the buttons are small, they can be a little cumbersome to use. In particular, I found the small zoom toggle that falls under the right thumb a little awkward to use. Its small size sometimes made it difficult to get the exact zoom magnification I wanted. Also, because it is located on the top right corner of the back panel, I no longer had my right thumb underneath the heavy body of the camera to support it. A ring around shutter button might have been more convenient.

The most frustrating control button was the miniature joystick, which you use to navigate menus, change scene modes and shooting modes, and select other settings. It is small and can be tricky to operate, making it very easy to make a wrong selection. I routinely found myself mistakenly navigating up or down to an unintended menu choice when trying to push the toggle inward for "OK". In some cases, it took me a few tries to make the selection I wanted.

With 14-megapixels at its disposal, it is almost a foregone conclusion that this camera can capture high-quality images. And, in easy shooting conditions such as ample sunlight outdoors, this is certainly the case. However, indoor shots can be a mixed bag. For example, when taking pictures in a café in the late afternoon light, I found that photos taken with the flash turned off tended to be blurry, despite the camera's ability to shoot at high ISO settings.
And, selecting a high ISO setting manually introduced noticeable digital noise in the images; which is common when shooting indoors or in low light with consumer level cameras. In late afternoon on an overcast day, I took photos of a ping-pong game, using ISO 800; but even with the flash firing, the images looked noticeably noisy on-screen, even when viewed at smaller than actual size.One possibly helpful mode is candlelight, but even when using this mode indoors with many lamps turned on, the anti-shake warning appeared on the LCD screen.

Unfortunately, even daytime landscape stills taken at ISO 100 revealed upon close examination a lack of fine detail and sharp edges in distant objects, and a fair amount of digital noise. These artifacts are unlikely to be visible on small-size prints or a typical computer screen, but given that the camera boasts 14 megapixels, you might reasonably expect to have more leeway to make enlargements.

Given that this camera is ruggedly built and thereby a natural fit for activity, it would be great if it proved fast for a point-and-shoot camera. Unfortunately, the TG-810's shutter lag is not extraordinary for a point-and-shoot camera ― it's not quite fast enough to consistently trip the shutter in time to capture the quick and sudden movements of an active two-year-old, a fast game of ping-pong, or a scampering dog.

Bottom Line - if capturing photos of adventures in the back country or underwater is your top priority, you can't go wrong with the rugged Olympus Tough TG-810. But if you're looking for a day-to-day point-and-shoot, there are various other models on the market that will give you noticeably better image quality and shooting performance; and you'll likely prefer not to operate the Tough's frustratingly small buttons. With a MSRP of $399.99, the TG-810 is also quite expensive, even when you consider its Tough specs.