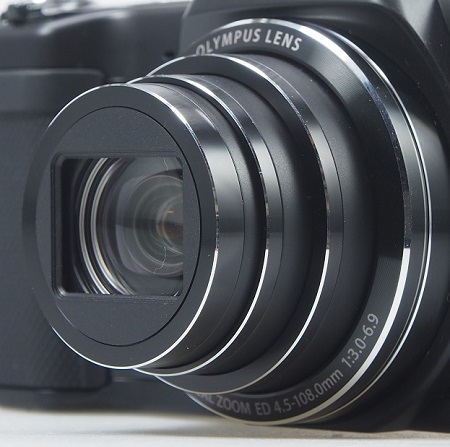 The 24x optical zoom lens is easily the best feature of the Olympus SZ-15, offering a 35mm equivalent measurement of 25 - 600 mm. For a camera that only measures 1.5 inches in thickness, having such a large optical zoom lens is a great feature.
The lens retracts completely inside the camera when powered down, with the glass protected by a plastic cover that automatically slides into place. When you press the SZ-15's power switch, the lens partially extends away from the lens housing, making the camera about 2.75 inches in thickness. At full zoom extension the SZ-15 measures about 3.5 inches in thickness. This camera's zoom motor works pretty quickly, moving through the full zoom range in about 2 seconds.
The SZ-15 lens has an maximum aperture opening of f/3.0 at wide angle and of f/6.9 at full telephoto. The camera's focus range is:
The small 1/2.3-inch image sensor included with the SZ-15 leaves this Olympus camera lacking the ability to create the sharpest images. The image sensor offers 16 megapixels of resolution, but it's a CCD type of image sensor, which limits its ability to work well in low light versus a CMOS image sensor.
Olympus included a popup flash unit with the SZ-15, which gives the flash a bit of a better angle over the large zoom lens versus a flash unit that's built into the camera body. The popup flash is directly over the lens. The on-screen flash controls (Auto, Red Eye Reduction, Fill-In, Off) aren't available unless you have the flash popped up and opened. The SZ-15's flash range at ISO 800 is:

The flash switch is located on the top panel of the camera. To open the flash, just slide the switch to the right. Press the flash unit downward to close it.

The right side of the top panel has very few buttons, making it easy to operate this camera. The small silver power button isn't raised away from the camera, which can make it a little difficult to find when you're in a hurry. The zoom switch is at the edge of the hand grip, which is a convenient positioning for activating the optical zoom when you're in a hurry.
The shutter button is inside of the zoom switch, and it's a good size to use easily.
There's also a right-hand grip on the right side of the SZ-15, which makes it easy to hold and operate this camera with one hand, although it can be difficult to do this if you're using a large telephoto setting. One-handed operation can introduce camera shake into the shot.

The Olympus SZ-15's LCD screen is a slightly above average unit in today's camera market, measuring 3.0 inches diagonally with 460,000 pixels of resolution. It does an adequate job of providing sharp and bright images.
Glare isn't a significant problem with the SZ-15 when shooting in direct sunlight. And if you're having a problem seeing the screen when shooting outdoors, you can choose from one of five brightness levels for the LCD.

The right panel of the camera contains the camera's HDMI and USB ports. These ports are behind a hard plastic covering with a flexible hinge that snaps into place.

The bottom panel of the Olympus SZ-15 contains a compartment for the battery and memory card. The hinged door to the compartment locks in place with a switch.
The battery Olympus included with the SZ-15 is pretty thin, but it still offers very nice battery life versus similarly priced cameras. You'll charge the battery inside the camera using a supplied USB cable and adapter.