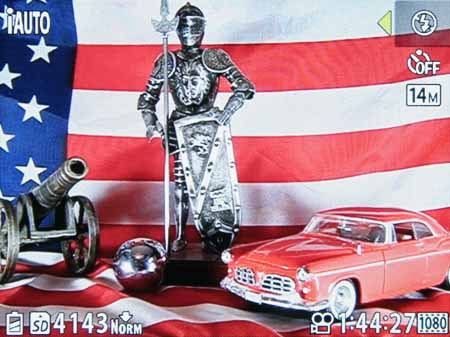 Please excuse the poor quality of these screen captures. The camera does not come with an AV cable, therefore we had to photograph the LCD.


This is the default screen display in shooting mode, shown here in iAuto mode. Pressing up on the four-way control adds a grid and a histogram in the lower left corner. One more press gets rid of all information. However, even in the no-information display, when you change shooting mode these settings will appear for a couple of seconds and then disappear.

As indicated at top right, pressing leftward on the four-way control takes you to the menus shown on screen, starting with the flash menu if you have lifted the flash (it doesn't pop up automatically). Pressing the right or down positions will also deliver you to the menu (upward changes the on-screen information display). Once you've accessed one of these items, such as file size in this screen, another yellow arrow will appear beside it so you can press rightward on the four-way control and jump directly to it rather than having to press downward repeatedly.


Program mode offers the most manual settings control you get on this camera. There is no manual mode nor aperture- or shutter-priority mode. For example, you can adjust the white balance setting only in Program, Photo with Clip, and Panorama modes.


An AF box appears in green and camera beeps if focus has locked on. If not, the box will appear in red and flash, along with the camera shake warning icon at the bottom of the display. There is no manual focus option.


In Program mode, as well as Photo with Clip and Panorama modes, you can select the white balance. The camera offers two custom white balance settings. You set these by capturing a reference image using the menu button. Notice the film strip of images at the bottom of the screen; the one at center in the yellow box is previewing the selected WB setting, while the others correspond to the other settings.


When it comes to burst modes, the SP-820UZ offers four: two speeds that capture full-resolution 14MP files, and two high-speed options at 3MP. The full-resolution options are not the fastest - a little bit of a disappointment (the faster speed can only capture three shots at a time at 3.3fps). Burst 1 snaps photos at just 1.6fps, though it can doesn't have the three-shot limitation, and seemingly can continue until memory card capacity or write speed interfere.

The screaming-fast speeds you get at 3MP are a lot of fun. High-Speed Burst 1 shoots at 11fps, while High-Speed Burst 2 goes at a blistering 28fps. At 28fps the camera doesn't bother making the shutter-click sound. Both of these high-speed modes have a 34-shot limit, so in High-Speed Burst 2 you're practically done once you've started. While 3MP may not seem like much, that's still enough resolution for decent prints up to 8x10-inches or larger.


The SCN position on the mode dial gives quick access to one of 14 scene modes. As with the other on-screen menu options, the scene mode is easily changed using left and right positions on the four-way control. As pictured at the top of the LCD screen, a scroll of scene mode icons and pictures with captions make selection easy.

The Magic position on the mode dial takes you one of 12 effects, which you select using the left and right positions on the four-way control.

In the first page of the recording menu you can adjust settings such as auto focus mode, metering mode, digital zoom, and image stabilization.


Page 2 of the recording menu offers the unique feature super-resolution zoom, which implies its superiority to traditional digital zoom (which is available on the previous menu page). Using super-res zoom alone doubles the top magnification from 40X to 80X, whereas the 4X digital zoom results in a 160X maximum magnification. If both features are turned on, super-res zoom handles the first half of digital magnification and digital zoom the stronger magnification, presumably 80X to 160X. According to the camera manual, super-resolution zoom does not degrade the image (as digital zoom is commonly understood to do) because of increased processing of pixel counts. In practice, used while hand-holding the camera on an overcast day, my shots looked to be on a par with the 3MP images shot with the burst modes. To hide the obvious distortions in details, I had to reduce the on-screen view far below 100% of the image.

The settings menu offers a typical assortment of camera operations adjustments. The backup function is for copying images from the internal memory to an SD Card. Note that the camera is Eye-Fi compatible (card not included).


Page 2 of the settings menu is where you perform an adjustment to image processing (pixel mapping) if needed, though this is already done at the factory. LCD brightness is adjusted here, and TV output: NTSC/PAL, HDMI or HDMI control.


In addition to using the extensive Beauty Fix edits you can apply in playback mode, you can apply these features as part of a Beauty mode preset while shooting in Beauty mode. You can save three custom settings.


The camera can record video at up to 1080p resolution, and can operate its powerful zoom while capturing a movie. However, while zooming the lens motor can be heard on the movie audio. While certainly distracting, it could be worse - I've heard louder and and more grating motors on a digital camera's video.