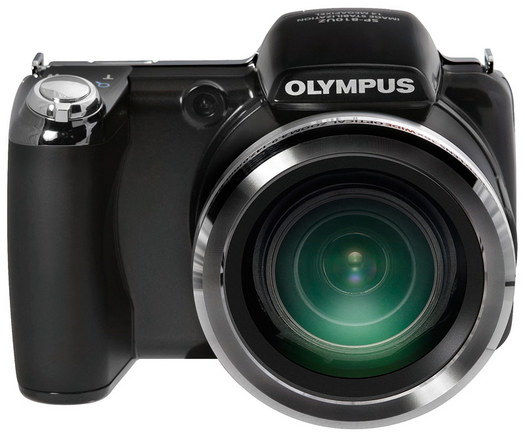 Olympus has just announced "one of the smallest cameras currently on the market with a zoom of 36x" -- the SP-810UZ -- which replaces last year's SP-800UZ. While the 810 retains the 14-mega pixel image sensor, 3.0-inch LCD, and 720p HD video recording specifications of the previous model, the big change is the all new 36x optical zoom lens (last year it only had a 30x optical zoom). In 35mm equivalency, this 1:2.9-5.7F lens has a 24-868mm range.
To help you take advantage of long zooms, Olympus has build in a number of software features, including AF Tracking (helps keep focus on fast moving objects), Dual Image Stabilization (for smooth shooting without a tripod), Enhanced ISO Sensitivity (for cleaner, darker scenes), Shadow Adjustment Technology (for a more realistic contrast), and their proprietary TruePic III+ Image Processor (helps eliminate blur in your 720p HD videos, among other things). Speaking of HD video, using the 810UZ's HDMI out with built in "HDMI Control", you can plug the camera into your HDTV and, using your own remote, playback video, browse still photos, and access menu functions.
Thanks to the movie 'Avatar', Olympus has also included a 3D mode where you'll take two photos of one subject at slightly different angles, and then be able to see the 3D image on any 3D-compatible computer monitor and television. If 3D isn't your thing, you might be interested in the 810UZ's In-Camera Panorama feature or one of the Ten Magic Filters. Two brand new filters are included: Miniature Filter (creates tilt-shift photos which, from certain angles, can make the real world look like a toy model) and Reflection Filter (makes any subject looks like they "are standing over a glassy, still lake").
Olympus SP-810UZ Features:
The Olympus SP-810UZ will be available this September (2011) in black with an estimated MSRP of $329.99 -- $20 less than last year's model. It ships with a Li-on Battery (LI-50C), charger, USB-AC adaptor, A/V cable, protective lens cap, camera strap, quick start guide, warranty card, and a software bundle CD. For more information, check out the Olympus website.
Additional Views: