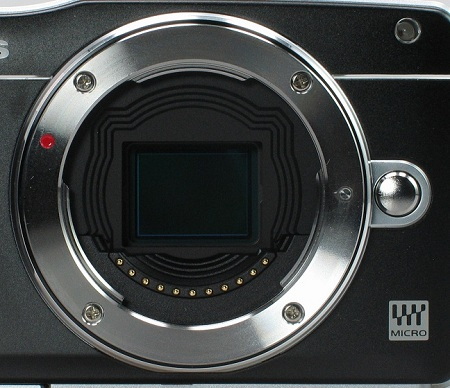 As with other PEN family cameras, the Olympus PEN E-PM2 interchangeable lens camera (ILC) makes use of the Micro Four Thirds lens system. This lens system uses smaller lenses than DSLR cameras typically use. The Micro Four Thirds lens mount works similarly to a DSLR lens mount, where you line up the red dots on the lens and mount and then twist the lens until it locks in place. The button on the far right of the mount is the lens release button.
Because the Micro Four Thirds system has been in use for quite a few years, you should have no problem finding a variety of lenses to use with the PM2, also called the "Mini." Olympus itself offers more than a dozen Micro Four Thirds lenses, and 30-plus lenses are available in the overall market from different manufacturers. Other types of lenses can be used if you have the right adapter for your Micro Four Thirds lens mount.
The PEN E-PM2 uses a high-speed 35-point multiple autofocus system, with a variety of focus mode options; including single AF, continuous AF, manual focus, and AF tracking. However certain focus modes aren't available unless you're using Micro Four Thirds lenses. Olympus included a magnified frame autofocus option, too, which will allow you to magnify the frame by between 5x and 14x.
You can see the PEN E-PM2's 4/3 Live MOS image sensor in the middle of the above photo. The image sensor with this model measures 0.68 by 0.51 inches (17.3 by 13 mm), equaling about 22mm diagonally. This image sensor is quite a bit larger than what you're going to find in a point-n-shoot camera, where image sensors typically measure about 8mm diagonally. Although you're going to find larger image sensors in DSLR cameras than what the E-PM2 offers, this camera's image sensor is large enough that you're still going to have some really nice photographic quality.

Unlike some other ILC cameras, the PEN E-PM2 ships with an external flash unit (FL-LM1), which will save you some money versus having to purchase one separately. As with most aspects of Micro Four Thirds cameras, the flash unit for this camera is smaller than what you'd find with a DSLR camera. Unfortunately, there is no built-in flash option with this camera.
The flash attaches to the hot shoe in the middle of the top panel of the camera. The flash remains folded down when it isn't in use, and you must raise it manually to activate it (as shown here). You'll have to press a switch on the flash to release it from the hot shoe before you can slide it out of place.
The PEN E-PM2 has quite a few flash modes available, including flash auto, fill-in, redeye, slow sync, redeye slow sync, manual, and flash off. The fastest synchronization speed available is 1/250th of a second. You can control the flash intensity in one-third stops between +3 and -3 EV.
Because of shadows in images caused by the spacial relationship between the lens and flash, Olympus recommends not using the flash with certain lenses, including 14-150 mm and 12-50 mm lenses. With other lenses, such as the 14-42mm kit lens, you may see the shadows if you shoot from a distance to the subject of closer than 3 feet.
According to Olympus, the working range for the PL-LM1 flash is 10 feet at ISO 200 or 7 feet at ISO 100 with the lens at a 35mm lens position. The flash has no source of its own power, running from the camera's battery.

PEN E-PM2). The stereo microphones are marked as L and R on the top panel, while the camera's speakers are the two rows on the left side of the top panel. You can purchase an external microphone to use with the E-PM2.

Olympus included a high-quality 3.0-inch screen with 460,000 pixels. It's a widescreen LCD with a 16:9 aspect ratio, which is great for framing HD movies that you shoot with the PEN E-PM2. This bright screen produces very sharp images. Glare from the screen when shooting in sunlight really isn't noticeable. Olympus included seven levels of brightness setting options with the Mini 2.
This is a touch screen LCD, allowing you to make camera menu selections, to enlarge images on the screen, and to release the shutter.
It's one of the highest-quality LCD screens you're going to find on a camera in this price range.

Because of the touch screen LCD, you will probably end up making most of your menu selections there. However, Olympus did include a few basic control buttons on the back panel if you'd rather use them, which is a nice touch.
The Info button on the top provides information on the screen about the current modes. You can use the Info button to show the scene's histogram, too. In Playback mode, the Info button changes the information about the image that's displayed on the screen. Above the Info button is an area for your thumb to rest while shooting.
The four-way button will rotate or spin, allowing you to more easily move through the stored images on the PEN E-PM2 or through the menu options. Depressing the top of the four-way button opens the exposure compensation control, while the right side controls the flash menus (if you have the flash attached). The bottom section of the button controls the continuous shot and self-timer modes, while the left side controls the autofocus target. The OK button in the middle allows you to select menu command options.
On the bottom of the panel is the Menu button, which will open the camera's shooting menu, setup menu, or playback menu, depending on the mode you're currently using.
All of the buttons are a really nice size, making it easy to use them. With a widescreen LCD and control buttons, the PEN E-PM2 is quite a bit wider than what you may be used to with point-n-shoot cameras, measuring 4.29 inches.

Along the top of the back panel you'll have access to a few additional buttons. On the far left is the Playback button, allowing you to view the images you've previously shot or to access the Playback menu. The Delete button allows you to send images to the trash.
In the middle of this image is the accessory port just below the hot shoe, which is covered by the protective plastic cover (marked with Olympus). On the far right is the movie button, through which you can start and stop video recording.
The USB and HDMI connectors for the E-PM2 are hidden behind a flexible cover along the right side of the camera. The cover snaps into place, although it's a little small, making it tough to open for those with large hands.

The PEN E-PM2 uses a pretty large battery, which can be charged in the separate battery charger unit (shown here on the left). Olympus shipped a power cord that's a few feet long with the battery charger, which is nice for having some flexibility in where you can charge the battery. Olympus estimates the battery will work for 360 shots, which is very impressive battery life. My tests found that this number is pretty accurate -- perhaps a little high. Using the flash a lot will drain the battery more quickly.
You can use SD, SDHC, or SDXC memory cards with this camera. We recommend a fast memory card, especially if you plan on using the HD video option often. The Mini is shown here with a fast Sandisk Extreme Pro ( UHS-1) 8GB SDHC card.
The battery and memory card compartment is on the bottom panel. This compartment's cover locks into place with a switch, and the hinge holding the cover in place is of a high quality. In fact, this entire camera has a very solid look and feel, which you don't always receive with small ILC cameras.