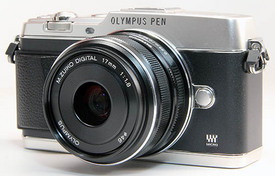 Assisting with your low-light shooting is a small pop-up flash unit. It has a GN14 (ISO200), and an increased flash sync speed of up to 1/320 of a second, allowing for more range and increased ability to shoot in brighter situations.
Our sample portrait images came out fantastic, shooting both with and without the built-in flash unit. Thanks to the camera's face detection software, our images were perfectly in focus and exposed for the detected faces. The high amounts of detail within the face and especially the eyes really draw you into the images. You can also see all of the detail in the skin and clothes of the subject. Optional red-eye reduction flash settings are available and kept all redness out of the eyes of our subject in our sample.
Assisting with your creative shooting is a slew of "Art" filters and Olympus's "Story" shooting mode. The art shooting modes consist of 12 pre-set shooting modes that are designed to simulate custom and creative photographic techniques. These images start with a normal, high quality image and then apply these settings, so you know you will be getting the highest quality image possible after the effects are supplied. Olympus's story mode allows for you to capture several images that the camera puts into a single framed image for you. They provide you with several templates, all with several options and variations for each so you can customize one for any situation. Just touching a box on the LCD screen allows you to select where you want to capture your next image.
Video capture is a fantastic feature on the E-P5. With its ability to capture full 1080p HD video at the touch of a button, combined with the amazing 5-axis Image Stabilization system, this is one of the most versatile still image cameras available for video. The video captured by the E-P5 is crisp and clear thanks to the continuous autofocus feature and high quality image sensor. When you add the ability to walk and move the camera in other ways without special equipment, due to the I.S. system, your creativity and shooting abilities go through the roof. This is definitely one of the best cameras for shooting video on the move.
Powering the E-P5 is a 7.6V, 1220mAh rechargeable Li-Ion battery. This battery is powerful enough to capture up to 330 images on a single charge, and was more than enough for us to complete our tests while capturing approx. 200 images and several videos. In fact we had plenty of power to spare afterwards. Using one of the optional EVFs is another way to help increase the life of the battery, since the camera will not have to power the large, bright LCD screen all the time. Other options like the I.S. and built-in WiFi are awesome features, but both use up the battery much faster, so turning them off when not in use is a good idea. For long days or several day shooting trips, you will want to have a spare battery or two; depending on where and how much you will shoot. We recommend picking up a spare battery or two. The included quick charging unit makes it easy to keep several batteries charged and ready to go if you plan ahead.
Bottom Line - The Olympus E-P5 is a compact and powerful rangefinder model ILC. Sporting the Micro Four-Thirds mount provides it with possibly the best collection of available lenses on the market, thanks to the ability to use any brand Micro Four-Thirds lens. Image quality from the 16-Megapixel imaging sensor and TruePic VI processor is amazing, as is the camera's overall performance. With a MSRP of US $999.99, this is a very powerful ILC. There are only a few features out there that cannot be found on the camera, and if you need every available feature, you may want to look at the Olympus OM-D E-M1.