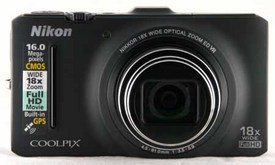 The Coolpix S9300 is the flagship model in Nikon's new S-series. For starters, the Nikkor lens is both wide-angle (25mm) and offers a powerful 18x zoom in a body slim enough to drop in a shirt pocket at 1.5 inches thick. The rest of the features speak for themselves: a 16-megapixel CMOS sensor, vibration reduction image stabilization, high resolution LCD (921,000 dots), full HD (1080p) movie recording, and built-in GPS. Add to that a fast burst mode at 7fps (full 16MP resolution), plus two additional burst modes that capture low-resolution files at a scorching 60fps and 120fps, and you have a lot of potential fun at your fingertips.

The S9300 offers a lot of features (such as a scene auto selector mode) and user-selectable settings (like auto focus mode and metering) that are typical of point-and-shoot cameras. The camera is very well suited to the photographer who usually lets the camera do the thinking, but does want the flexibility to manually adjust key settings when the situation calls for it. For example, even when using the camera's auto mode, you can select one of five flash settings; adjust exposure compensation, hue and vividness; as well as choose a white balance setting, change the ISO, etc. (Most of these settings are not adjustable when using the scene auto selector mode.) The camera assumes a certain level of sophistication in the user. For example, this camera does not feature a help system that explains the features on the LCD or offers photography tips. However, the camera does not offer aperture-priority or shutter-priority shooting modes, which are standard photography modes, much less a full manual mode.

What you do get with the S9300 tends to work very well. I liked the results I got when shooting in auto mode and scene auto selector mode. Exposures tended to be accurate, auto focus usually delivered crisp details, and color saturation looked appealing. This was all especially true on the very attractive 921,000-dot LCD screen. Viewing photographs on the high-resolution screen is very enjoyable, and whisking through them using the thumb dial (or, as Nikon calls it, a rotary multi-selector), is easy. Though playback options include zoom, calendar, filmstrip and index views, there are no display options including a histogram or detailed camera setting information.

Operating the camera is usually a breeze. The mode dial atop the camera has eight positions, which is a quick and convenient way to change your shooting mode. I particularly liked the selections provided: auto, effects, continuous shooting, smart portrait, backlighting, night landscape, a user-selected scene mode, and scene auto selector. The movie recording button isn't optimally placed - at its top right location on the back panel, I found myself accidentally pressing it on occasion when operating the camera one-handed.

The continuous shooting position on the mode dial puts the camera into high-speed burst by default, which is 7 frames per second at full 16MP resolution. This mode has a limit of 7 frames, but you have six other options. The low-speed burst mode (used by the Sports scene mode) does not limit the number of shots; it starts out at roughly 2.5fps for the first six frames, then slows to about 2fps for the next half dozen, then slows again to roughly 1.4fps, but at that speed seems to be able to go like a somewhat hobbled Energizer bunny (I stopped after 37 frames). There is also a pre-shooting cache setting that saves images before you press the shutter button, so you don't miss a shot, at up to 10.6fps for five frames. Where the camera really goes crazy is with low-resolution files. There's a 60fps mode that captures 1MP images, and a 120fps burst mode that records VGA files. Those resolutions won't win any awards, but if you are keen to freeze very fast action, these two modes offer a fabulous tool to see every minute movement.

The only drawback to using the burst modes is the challenge of accurately framing a moving subject using only the LCD. That's because the LCD cannot refresh fast enough help you reframe your shot. In cases like this, I was left wishing I had an optical viewfinder to fall back on.

Speaking of speed-related features, in addition to full-resolution 1080p HD video recording, this Coolpix also offers high-speed movie recording modes for slow-motion playback. Like the corresponding still image modes, the camera can capture video at 60fps or 120fps. Again, a great way to freeze frenetic action. By default the camera uses single AF when recording video, though you can choose full-time AF in the menus, though the sound of the moving lens elements may be heard on your audio. The zooming motor also makes noise that can be heard on audio. There is no audio jack for using an external microphone.

Of course, the big gun here is the zoom lens. With both a wide angle (25 mm) and a maximum of 18x magnification (450 mm), the flexibility is tremendous. Using the zoom ring around the shutter button, the lens glides easily in and out to capture subjects near and far. It is quite thrilling to be able to zoom in so close on a distant subject in about two seconds. In my case, I got close shots of wildlife across a small lake and horses on the far side of a racetrack.

But if you expect those handheld shots to look as sharp as those shot with much less magnification, you will be disappointed. You'll need a tripod. Despite all the advances in vibration reduction technology, which is employed in the S9300's lens, it is not enough to combat the natural shaking of a hand when the camera is zoomed to 18x. If you don't carry a tripod or monopod, use less zoom and crop later. After all, you have 16MP of resolution to play with. The same is true for video recording. It is very difficult to hold the camera still enough to record smooth video when zoomed in fully.

Just as this camera reaches the limits of VR technology, it also exemplifies the false promise of higher megapixel ratings. Despite the high price tag and wealth of features, the S9300 falls a little short on sharp details and digital noise. Surprised by fuzzy edges when viewing its images at 100% on screen (lower magnifications looked superb), I looked at comparable shots taken by an old 5MP point-and-shoot and an 8MP dSLR (an unfair fight, I realize). I was surprised that the digital noise in clear blue sky was better - but not remarkably better - with the S9300 compared to the older 5MP Canon A520. Of course, the new Nikon's exposures and features are light years ahead of the old clunker. Similarly, the dSLR (the 8MP Canon 20D) showed less noise and captured sharper details than the S9300. Obviously, a lot of other technology goes into capturing and processing images, and a dSLR is by definition a more sophisticated camera, but I mention it for reference anyway. The bottom line is that the Coolpix S9300 captures very attractive images - as long as you don't expect to view or print them at large sizes.

This Coolpix offers high light sensitivity of ISO 125 - 3200, and it performs quite well through the range - again, as long as you keep the size restricted. As you'd expect, details get somewhat fuzzy at the higher settings. When viewed at 50% or 100% on screen, you can see a gradual drop-off in detail that arguably becomes too obtrusive at ISO 1600, when edges start looking quite noticeably smeared. But at smaller sizes the distinction is hardly noticeable, except for slightly less color saturation at ISO 3200.

This compact camera comes with an on-board GPS for geotagging your images. Before using this feature, it is recommended that you download an update from the Nikon website. This feature also incorporates information about points of interest, if you choose, and offers an electronic compass.

Given that the camera does not have an impressive battery life rating - just 200 shots per CIPA - I expected the GPS feature to quickly render the camera lifeless. However, I was very surprised that with GPS turned on I was able to record 426 shots on a single charge. Granted, many of these were shot in burst mode, and I hardly used the flash (CIPA assumes 50% flash use), but nonetheless it was encouraging.

What was frustrating, however, was the battery life indicator. It only has three levels: full, half full, and low. One day I left the house with what I thought was a full charge, but the camera conked out after 132 photos (only a few shot with flash) and six 15-second videos. To avoid getting stranded, I'd charge this camera before a big day of shooting, regardless of what the camera says. On the plus side, the battery seems to charge very quickly. Only a few minutes are required for the battery level indicator to say it has a full charge (though, as I said, this may be unreliable).

The camera offers a typical assortment of scene modes (17 in all). But considering that four of them are available on the mode dial, including the auto scene selector mode, it's unlikely you will have to make too many trips to the scene mode menu. There is an effects position on the mode dial, to which you can assign one of six settings, including nostalgic sepia, high-contrast monochrome, and selective color. When using this last setting, the camera displays a color bar on the LCD, and you use the multi-selector dial to choose one of 12 colors to record (the rest of the photo is in black and white).

Skin softening tends to be a gimmicky effect, in my experience, though the S9300 surprised me with its subtle application. To see it on the camera's LCD required zooming in close on a face. Enlarging portraits on a bigger LCD was required to fully appreciate the smearing of my now rubbery-looking cheeks.

The easy panorama mode is convenient in that you simply pan the camera without having to press the shutter button, much less line up successive shots using some sort of guide. There are two panorama modes, normal (180 degrees) and wide (360 degrees). These record files that are 3200 x 560 and 6400 x 560, respectfully, when shooting horizontally. I liked the results I got outdoors, though indoor panoramas suffered from a few mismatched edges and obstructive digital noise. Though I like how these modes worked, I'd prefer to also have a panorama mode with an on-screen guide for alignment that would capture full-resolution files for later stitching on a PC.

Bottom line - The Coolpix S9300 offers a lot of features for the money. The wide-angle 18x zoom and numerous burst modes make for a lot of fun shooting. The mode dial and multi-selector thumb wheel make it easy to switch shooting modes and to navigate the camera's sophisticated features. Image quality could be improved - but it's unlikely you'll notice the shortcoming if you don't view the images at large sizes. If you're an avid shooter, you'll likely want to pick up an extra battery.