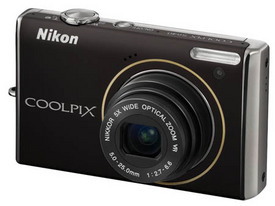 Nikon's new CoolPix S640 provides you with a nice mix of versatility and speed. Featuring a 12.2-Megapixel imaging sensor, a 5x wide optical zoom lens, 4-way VR Image Stabilization and Scene Auto Selector; this camera is versatile enough for just about any shooting situation and easy enough for anyone to operate; including those with no photography experience. Combining the versatility with the camera's very fast start-up and quick auto-focus will allow you to catch those candid moments that aren't always possible with many point-n-shoot cameras. Also included on the S640 are Nikon's Smart Portrait System, a 2.7-inch LCD screen, D-Lighting and a 640x480 movie mode.

This ultra-compact model is very easy to hold and operate with just one hand, thanks to the thumb grip and convenient layout. Replacing the standard 4-way controller is a rotary dial that assumes all of the functions of the 4-way controller. This allows the 4 directions to be used as shortcuts, but the dial makes it easier to scroll through your images and navigate the menus. All of these functions, along with viewing and framing your images is done on the 2.7-inch, 230,000 dot LCD screen. With 11 levels of brightness and an anti-glare coating, it is very easy to see in most lighting conditions. While it can be seen in direct sunlight, the coating does not stop all of the glare.

Nikon uses separate features to make up it's VR Image Stabilization, which assists you in capturing sharper images, even in low-light or with moving subjects. The Lens Shift optical image stabilization accounts for slight movements and camera shake without adding any additional noise to your image. Motion detection and the camera's ability to raise the ISO up to 6400 help increase the shutter speed to stop motion blur, but they will also add some noise to your photos. The higher the sensitivity (ISO) setting used, the more noise you will see. Finally there is Nikon's BSS (Best Shot Selector), which can capture up to 10 images in a burst mode fashion, and then keeps the sharpest image for you.

Performance from the S640 is very good for an ultra-compact model. As Nikon claims, the camera starts very quickly and was able to capture its first in image in just 1 second after pressing the power button. When the camera is auto-focused, the shutter lag is less than 1/10 of a second, or 2/10 to 3/10 of a second when allowing the autofocus to work. This number varies depending on the amount of available light, distance, focal length, etc. With the camera in single shot mode, it is able to capture 5 images in 10.0 seconds, giving it a shot-to-shot delay of 2 seconds. When you add the flash, this number goes up and becomes hard to determine as the camera only captures 2 images in 3.5 seconds, then stops as it needs to recharge the flash. There is also a continuous shooting mode available, which is capable of capturing 10 images in 10.7 seconds (0.94fps) before filling the buffer. Another feature that Nikon includes on most of its point-n-shoot models is the Multi-Shot 16 mode. This mode will take 16 images in 7/10 of a second and align them in four rows of four, giving you a unique and fun way of capturing motion or just to create an artistic print. All of our tests were completed using a Patriot 2GB SD memory card, 12-Megapixel High quality, Flash off, ISO auto, Auto shooting mode and all other settings at the factory defaults. All times may vary depending on lighting, camera settings, media, etc.

Our outdoor sample images show that the camera produces excellent exposures and good colors, depending on the shooting mode. The colors when shooting in "Auto" mode are slightly on the dull side, while our Firehouse shot taken in Auto Scene Selector has colors that are more vivid, making the image stand out from the rest. The camera also has the ability to overdue the contrast, d-lighting and other corrections that are applied to an image when you use the Quick Retouch feature. This is shown with the Firehouse once again as the Quick Retouch image was made from the image shown right before it on the samples page. You can see in the image that the shadows have been brightened, but the contrast has been way overdone. We also found that there was some edge softness in several of the sample images and occasionally some aberrations in high-contrast areas.

The S640's Nikkor, 5x wide optical zoom lens offers a 35mm equivalent range of 28-140mm, which is great for shooting landscape and group portrait shots at the wide end. Using the telephoto end will not allow you to get incredibly close to objects that are too far off in the distance, but this end of the zoom can be a very important and useful feature when composing your images. This allows you to eliminate things from your image by zooming in, and allows you to capture a single person out of a group. The better you set up your composition with the camera, the less work you have to do on you computer afterwards.

When looking at our indoor sample images, you will see the same image quality highlights and flaws as in the outdoor samples. The camera does an excellent job with the exposures without the flash, and again the colors seem just a little on the dull side. The biggest problem is the edge softness, which you can see on the bottom of the magazines and along the top of the image as well. Noise is kept to a relatively low level through ISO 800, for an ultra-compact model, but increases very quickly after that. Assisting you in keeping the ISO down is the S640's built-in, TTL flash. This flash does not provide very much power, although Nikon claims that it has a range of up to 26ft. at ISO Auto. Our flash sample, shot at ISO 100, shows that the built-in speedlite was not powerful enough to correctly illuminate our image from just 5-feet away using the mid-telephoto zoom. The camera also has trouble controlling the flash when shooting in macro mode, as it blew out our macro shot of the candy dish.

Shooting with Nikon's Smart Portrait mode makes capturing quality portrait shots easier than ever. With the camera in this mode, you can actually set the camera down and let it do all the work. It quickly detects any faces within the frame, and in no time, the AF Assist lamp kicks in to help the camera focus. Once the focus has locked, the camera follows the face and waits for your subject to smile. When this happens, the camera automatically captures an image, whether you press the shutter or not. This feature works as good, if not better, than any other smile detection feature we've tested. The only concern about the Smart Portrait System is the new Skin Softening feature. Although it has 3 levels to choose from, the default level that is shown in our Portrait sample, smooths the face too much which causes it to appear out of focus. There is absolutely no texture to the skin, which gives it a poorly touched-up look. You can also see a little red-eye, which was not taken care of while using the red-eye reduction flash.

Movie mode allows you to capture video with sound at resolutions of 640x480 and 320x240 at 30fps. The lack of an HD video capture setting is a little disappointing as the number of HDTV's in the home is increasing rapidly, and this has become a standard feature on many consumer cameras. You can see in our sample video that there is very little noise and no artifacting present, even in the tough lighting conditions of the pool. The playback is a little choppy though, not as smooth as you would expect from a video captured at 30fps. Although you can not use the 5x optical zoom while recording, you can set it before hand. If it is a necessity to zoom while recording, you are presented with the option to use the digital zoom, but your image quality will suffer a bit. A very small but sensitive built-in mic is used to capture the sound for your movies. This mic will capture all of the sound around the camera, including the background noises that you might not notice while you are recording. In our Sample you can hear the kids swimming, but in the background you can also hear the air circulation system, which you do not notice while you are standing on deck.

Powering the CoolPix S640 is a 3.7V, 1050mAh Li-Ion rechargeable battery. While completing our tests, I captured 130 images and videos as well as spending time viewing them via the LCD screen without worrying about the battery running low. This fits right in with Nikon's claims of being capable of capturing 270 images on a single charge (CIPA). With the included battery charger, you have the ability to easily keep a second battery charged and on hand at all times, making this a great camera for a long day, weekend or even extended vacation shooting trips.

Bottom Line - The Nikon CoolPix S640 is a surprisingly fast and very versatile ultra-compact digicam. Sporting a 12.2-Megapixel imaging sensor, Nikkor 5x optical zoom lens, Lens Shift image stabilization and Auto Scene Selector mode, this is a camera that anyone can pick up, turn on and capture beautiful, high-resolution images just by pointing and shooting. The only major drawback is a noticeable amount of edge softness in most of our sample images. With a MSRP of US$249.95, this is a serious contender in the market for ultra-compact digicams under US$300. You may also want to look at the Samsung TL225, or the Canon PowerShot SD940 IS.