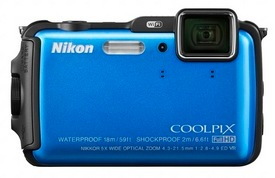 Nikon's new "Lifeproof" point-n-shoot model, the Coolpix AW120, is basically a repackaging of the AW110 from last year. The internals and features are the same with the camera sporting a 16-Megapixel CMOS imaging sensor, tons of automatic shooting features, built-in flash and LED focusing/video light, WiFi, GPS and a fantastic and easy to see 3.0-inch LCD screen. The one major difference that we were able to find is actually not that big. They have adjusted their 5x optical zoom lens to cover a 35mm equivalent of 24-120mm instead of the 28-140mm featured on the AW110.
Making this camera "Lifeproof" is its ability to withstand the punishment of everyday life. It can be submerged and operated underwater down to depths of 18M/59ft. This allows it to survive more than just a dip in the backyard pool, but it can be taken on a diving trip in a tropical location without worry. Along with being waterproof, it is also dustproof, so there are no weather conditions that you have to worry about. Its solid construction also allows it to be dropped and survive from up to 2M/6.6ft, which means you do not have to keep a secure grip on the camera at all times. You can even pass it along to the kids to have fun with. Finally, it has been designed to operate in the extreme cold, working in temperatures as low as 14°F, meaning it can go from the surf to the slopes at any time.

The camera performed well with all of our tests except for one. When dropping the camera from approx. 5ft, the camera froze up and the battery had to be removed to get it to work again.*
Handling the AW120 is fairly easy. The Top, sides and back all feature plenty of texture to help you get a grip, but they forgot about the front, leaving the surface smooth with no grip. The buttons of the back have not changed location, but they have been reshaped, which gives them a more distinct feel. This can help to change shooting settings without looking or in tough situations, once you have learned the layout of the controls.

The AW120 gives you the ability to do some basic operations without pressing any buttons. Motions and gestures can allow you to search through your images as well as a few other operations, great for when you are wearing a pair of gloves.

Composing your images is accomplished on a 3.0-inch, 921k dot LCD screen. With scratch and anti-glare coatings combined with adjustable levels of brightness, this screen is easy to see in all lighting conditions. Underwater is only place you may have a little trouble viewing the LCD screen, and that is only if you are not directly behind the screen.
Our outdoor image samples show us a very good exposure with very vivid colors. The images really pop when you look at them, both on the LCD screen and on a computer. When looking at the images at 100% magnification on a computer you can see that these images, even at the lowest ISO settings, show graininess in most of the colors; including the open blue skies and the red and yellows of our restaurant photo. The images also seem a little soft around the edges, but at the same time they have controlled aberrations very well. Framing your images is accomplished with the 5x internal optical zoom lens. The wider 24mm lens is better for landscapes and the entire range works well for most shooting situations. This lens is also equipped with Nikon's lens-shift optical image stabilization to help steady your when on the move or in low-light situations.
Our indoor samples show similar results as the outdoor, where the exposure and color look very good. We can also still see some of the noise in the images at the lower ISO settings, but it is not as noticeable. At the lower ISO settings, the images show a fantastic amount of detail. After the settings pass ISO 800, however, the image quality falls quickly. You will want to stay away from anything over ISO 1600 if at all possible. Assisting with your low-light and indoor shooting is a compact, built-in flash unit. With a range of up to 17ft. at ISO Auto, it will work well shooting indoors in a small room or just about any situation as long as you stay close to your subjects.
Both in and out of the water, the camera did very well with its portrait images. Out of the water it was able to quickly detect and follow any faces that appeared in the frame. Once the face has been detected, the camera will keep the face in focus and all of the exposure settings adjusted so that the face will always be the focus point of your images. The face detection does not work quite as well while shooting underwater, especially if the subjects happen to be wearing goggles; but you will have much better luck keeping your subjects as close as possible, which makes it much easier for the camera to focus and expose your images anyway. Remember that light does not travel as well underwater, so your flash and ambient light are far less than they would be on the surface.
Without an actual video recording mode, the AW120 is ready to capture video with just one press of a button in any shooting mode that you are currently in. Our sample videos play back very smoothly, making them a pleasure to watch. In great lighting the video quality is excellent, but becomes very grainy when the light gets lower. Audio can also be a bit of an issue. The small, built-in mic is very sensitive and will pick up the sounds that are loudest and closest to it. There is a lot of background noise that is overpowering in both of our sample movies, meaning you will have to be very careful where you position yourself when shooting if you will be looking for decent audio quality.
Powering the AW120 is a 3.7V, 1050mAh rechargeable Li-Ion battery. With a battery life of up to 350 images on a single charge, this is one of the best you will find on a compact camera these days. When you start to use the extra features, which make this camera so much fun, that battery life will drop significantly. During our testing, we were able to capture over 100 images and several short videos on a single charge while also looking at the GPS and WiFi features. What makes this camera a little more difficult is that the battery must be charged in the camera, with the waterproof door open. This means not only is it hard to keep a spare battery charged and ready, but it has to be kept away from all of the situations that it was designed for during charging.
Bottom Line - Nikon's newest "Lifeproof" digital camera, the AW120, did not disappoint. Sporting a 16-Megapixel imaging sensor, internal 5x optical zoom lens, lens-shift image stabilization and a body that withstand situations that most others cannot, makes it a valuable commodity for the adventurous or for the entire family. Ease of use and image quality both left us wanting to have one of our own to have ready for situations that we would not want to put our more expensive cameras in. Since this camera is very similar to its predecessor, and the MSRP of $349.99 being a full $100 more, you may also want to take a look at the Coolpix AW110.
*During the course of our tests, after the camera froze on the drop test, it froze several more times during normal operation.