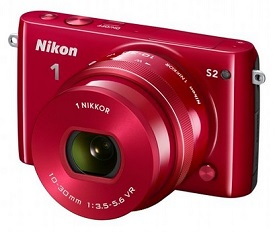 A serious photographer probably isn't going to look at the Nikon 1 S2 mirrorless interchangeable lens camera (ILC) and expect to be able to create high-level photographs. After all, the S2 almost looks more like a toy than a fully functioning advanced camera, as it's an extremely small ILC that's available in a few bright colors with a very limited number of dedicated control buttons.

Don't judge this camera's performance by its colorful cover, though.

Image quality is surprisingly good with the S2, and its performance speeds are outstanding. You won't have to worry much about shutter lag or shot-to-shot delays when using this model, and Nikon gave the S2 some really good full-resolution burst modes.

It's unfortunate the rest of the Nikon 1 S2's features can't match its performance levels. And even though the S2 is a considerable improvement over the Nikon 1 S1 in terms of image quality and performance speeds, its design quirks mean it can't quite live up to what's provided elsewhere in the mirrorless ILC market.

A mess of a menu structure will cause a lot of frustration for photographers as they learn to use the S2. And while you should be able to make use of this model easily enough after you spend a while working with it, some photographers won't be interested in investing the time required. The S2's fully Automatic mode is easy enough to use that some photographers will give up on figuring out the other shooting modes.

I think Nikon was trying to tweak the S2's various menus to simplify the process for the beginning photographers at whom the manufacturer aimed this camera. Instead, Nikon has created a confusing and frustrating interface. Something as simple as changing shooting modes or trying to change the data displayed on the screen requires a few button presses on a few different menu screens, whereas most cameras allow you to complete such a simple task with one action.

Further adding to the frustration is the fact that Nikon attempted to keep the physical size of the S2 extremely small by sacrificing a mode dial and other dedicated settings buttons. This means you must work through the on-screen menus to make almost every change to the S2's settings.

Nikon did give the S2 a Function button, which opens a popup window on the screen that leads to some commonly used camera settings, but there aren't enough operational features like this available with this model. Although this Function window is handy, it isn't as good as it could be. You can't change from JPEG to RAW or adjust the image resolution through the Function window for example.

Nikon left some key features that affect functionality out of the S2's design. Beyond the previously mentioned mode dial, the Nikon 1 S2 is missing a hot shoe and viewfinder option. With a camera aimed at beginners, Nikon should have given this model a touchscreen display interface, which also certainly would have made it much easier to operate. There's no raised area or right-hand grip to make it easier for you to hold and shoot the S2 either.

If you can work through and look past those odd operational aspects and missing features, you're going to be pretty pleased with the image quality you're able to achieve with the Nikon 1 S2. Images are pretty sharp and well exposed the majority of the time in good lighting. Flash photos were pretty well exposed too, and you can adjust the intensity of the popup flash unit to help you improve the results in low light photos.

Don't expect to make extremely large prints with the S2, as its images aren't going to be quite as good as what you'd find with a Nikon DSLR camera, even a starter-level DSLR. But you can comfortably make small- and mid-sized prints with this camera's images without having to worry much about problems with sharpness.

Nikon does offer a manual focus feature with the S2, but you'll have to awkwardly use the four-way button on the back of the camera to dial in the focus. The S2's autofocus mechanism works fast and is very accurate, so I doubt many photographers will even bother with the manual focus option.

In large part it's that impressive autofocus mechanism that makes the Nikon 1 S2 work so fast. The lack of shutter lag with this model means you'll rarely miss a spontaneous photo. And if you turn off the image review function, your shot-to-shot delays are minimal, giving the S2 terrific performance levels.

The S2's continuous-shot modes are also outstanding. You can pick from a mode that offers up to 30 continuous full-resolution frames in a little over 5 seconds before it slows down. Or you can shoot in a mode that shoots 10 frames in a fraction of a second, all at full JPEG resolution. Overall continuous shot performance slows only a little bit in RAW mode.

Movie quality is good with the Nikon 1 S2, and you can make quite a few adjustments to the movie settings. However, because of the camera's small size, it's very difficult to hold the camera steady and manually twist the zoom lens while recording video.

Battery life is good with the S2, allowing anywhere from 250 to 300 shots per charge. I was disappointed to see Nikon only included a microSD memory card slot with this camera though ... just another of the strange design features you'll find with the Nikon 1 S2.

Bottom Line - If you're the kind of photographer whose primary belief with a digital camera is that if it has good image quality and performance levels, it'll be a good camera for you regardless of whatever else the camera throws at you, the mirrorless ILC Nikon 1 S2 is going to meet your criteria ... and test your primary belief at the same time. The Nikon 1 S2 is a tiny colorful camera that doesn't look like it should be able to achieve good performance levels, yet it works extremely quickly while providing photos that fit nicely between point-n-shoot cameras and DSLR cameras in terms of image quality. On top of this, the S2's burst mode options are outstanding. While the S2 does a nice job while you're actually using it to record photos, it's those times in between that will drive you crazy. The S2's interface is a mess, forcing you to make multiple button presses and to work through multiple display screens to perform some of the most basic tasks, such as changing shooting modes or changing the data displayed on the screen in playback. In my opinion, Nikon needed to give this model more dedicated buttons. Even tucking a physical mode dial somewhere in the design would've helped quite a bit. I found that the Nikon 1 S2 is pretty easy to use in fully Automatic mode, and many photographers may simply give up on working through the confusing menus and just stick with using this model in basic mode. And while you can create images of a very good quality and work fast in Automatic mode, I'm not sure you want to spend $400-plus for a camera that you'll only use like a point-n-shoot camera. If you like to change the settings quite a bit while shooting photos like I do, it's tough to recommend the Nikon 1 S2. If you truly just want good image quality and high-level performance in a small, colorful mirrorless ILC -- and you can handle whatever else the camera throws at you -- the S2 will deliver.