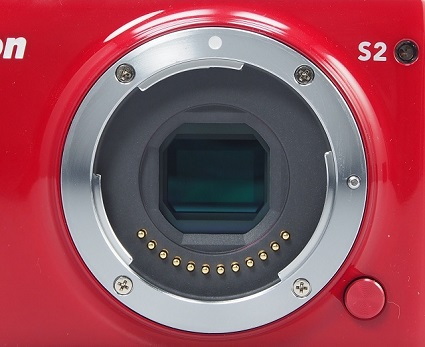 Nikon has included a CX-format CMOS image sensor with the mirrorless ILC S2, and it measures 13.1 x 8.8mm. It has 14.2-megapixels of resolution.
While that's a larger image sensor that you'd find in a little point-n-shoot camera, it's quite a bit smaller than what's found in a DSLR camera such as the Nikon D3300, which has a 23.5 x 15.6mm, APS-C DX-format image sensor.
With the Nikon 1 S2 you're limited to shooting at an aspect ratio that matches the camera's image sensor, a 3:2 aspect ratio. You're also limited to three image sizes -- 14.2MP, 7.9MP, and 3.5MP -- although you can crop photos to different aspect ratios and resize photos to different resolution sizes using the S2's in-camera editing functions.
The S2 includes a Nikon 1 lens mount, and the lens release button is shown in the lower right corner of this photo. However there's no image stabilization feature in the camera or the lens we tested.
Nikon included the powerful Expeed 4A processor with this model.
Nikon included a 1 NIKKOR 11-27mm f/3.5-5.6 zoom lens (approximately a 30-75mm equivalent considering the crop factor) with the Nikon 1 S2 kit I tested. A two-lens kit is available for this camera, too, adding a 1 NIKKOR 30-110mm f/3.8-5.6 VR zoom lens to the smaller lens.
By including a small kit lens with this camera, Nikon is able to maintain the small stature of the Nikon 1 S2. With the 11-27mm lens attached and locked (as shown here), the S2 measures about 2.25 inches in thickness.

With the zoom lens unlocked and extended (as shown in this photo), the camera's thickness measures about 3 inches.

In this photo of the top of the lens, you can see the zoom ring, which contains a rubbery, dimpled coating, making it easy to grip the ring. The Nikon 1 S2 has no motorized zoom function. It's a manual zoom ring only.
The current focal length is indicated by lining up the white vertical line on the ring below the zoom ring with the focal length number on the zoom ring. The L shown on the far right of the zoom ring is the lock setting, through which you can lock the zoom ring in place and collapse the lens to its minimum size.
Included on the zoom ring is the lock release button. One great aspect of the Nikon 1 S2's lens design is that you can power on the camera by simply unlocking the lens. Just press and hold down the lens lock release button and twist the zoom ring away from the L setting to turn on the camera. You also can turn on the camera through the power button, but you'll also have to unlock the lens before you can begin shooting photos with the Nikon 1 S2. If you forget to unlock the lens, the S2 will show an error message on the display screen.

Unlike most advanced interchangeable lens cameras, the Nikon 1 S2 does not have a hot shoe, which would allow you to connect an external flash unit.
Nikon has a built-in popup flash unit embedded in the top panel of the S2 camera body, which offers a guide number of 5/16 (m/ft.). Press the flash button on the left side of the camera body (as you're holding it) to open the popup flash. The flash will open automatically as it's needed in fully Automatic mode, but it won't open automatically as needed in other shooting modes.
The flash mode options are: Fill flash, red-eye reduction, red-eye with slow sync, slow sync, rear-curtain, and rear-curtain with slow sync. The flash modes will change depending on which shooting mode you're using.

The camera's other control buttons are on the back panel of the S2 on the right side. The top right corner of the back panel includes a thumb pad to help you pinch the thin Nikon 1 S2 while holding it.
Just below the thumb pad is the Playback button, allowing you to see the photos you have stored on the memory card. The Menu button gives you access to the S2's on-screen menus as well as the shooting mode options.
The four-way button includes a spinnable ring, making it easier to work through menus and stored images more quickly. You also can press the edges of the four-way ring to scroll through the menus. Press the OK button in the middle to make a menu selection.
While you're shooting photos, you also can access certain shooting controls using the four-way button, which are:
Along the bottom of the back right panel of the Nikon 1 S2 is the Delete button, for use with Playback mode. This button has no function in the shooting modes.

You'll find a 3.0-inch TFT-LCD screen that contains 460,000 pixels of resolution with the S2. Although it would have been nice to have touchscreen capabilities or an articulated screen with this model, as such features would make the S2 much easier to use for the beginners Nikon is aiming this camera at, this model's screen is bright and sharp. Seven brightness levels are available for the Nikon 1 S2's display screen.

Along the left side of the Nikon 1 S2 (as you're holding the camera), you can see the flash button at the top of the panel.
The camera's HDMI and USB ports are hidden behind a flexible hinged covering below the flash button. Nikon did include a USB cable with this camera, which is nice to see, because more and more newer cameras don't ship with a USB cable.

The bottom panel of the camera contains the battery and memory card compartment, both of which are protected by a hard plastic door with a sturdy hinge. The door locks in place with a toggle switch.
The Nikon 1 S2 makes use of microSD, microSDHC, or microSDXC memory cards. Although Nikon probably chose to use microSD-sized memory cards with the S2 to keep its size and weight as low as possible, it'd be more convenient for photographers if this model used full-sized SD memory cards, which are commonly found with digital cameras.

Nikon included a separate battery charger with the S2, making it convenient to make use of one battery while charging a second battery during an especially long photography session.
Battery life is good with the Nikon 1 S2, as Nikon rates the battery for 270 shots, and my tests found that number is accurate.