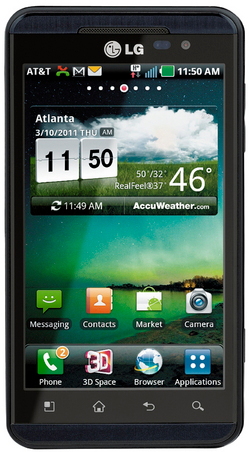 Here's a fun toy that's also a practical smartphone for AT&T. Meet the Thrill 4G, a new media centric Android device from LG that sports a 4.3 inch glass-free 3D display, which supports 3D resolutions up to 720p. And what good would a 3D display be without actually being able to create some 3D content, right? So the Thrill 4G sports dual 5 megapixel rear facing cameras for 720p stereoscopic HD video recording.
For its debut earlier this year, LG actually handed out Thrill 4G phones to concert goers at a Jane's Addiction concert so they could record and create the world's first user-generated 3D concert film (seen here). 3D content can be uploaded to YouTube 3D with the phones built-in One Touch software, or connected to any 3DTV via the phone's mini-HDMI output.
Gamers will enjoy pre-loaded games like NOVA 3D, Let's Golf, and Asphalt 6, but if those aren't titles for you, check out the Gameloft 3D store.
In addition to 3D, the Thrill 4G captures 5 megapixel still images and full HD 1080p video in regular old two dimensions. The Thrill 4G ships with Android 2.2 and 8GB of built in memory as well as an 8GB microSD card (though this slot is expandable up to 32GB).
LG Thrill 4G Features:
LG's Thrill 4G is available exclusively for AT&T, and can be purchased online or any AT&T retail location, depending on your contract, for around $99.99.
Additional Product Views: