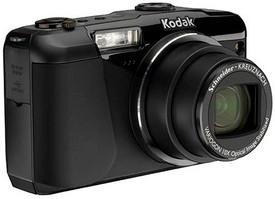 The only new "Z" series camera to be released by Kodak in the summer of 2009 is the EasyShare Z950. This camera falls between the Z980 and the Z915, pulling features from each. These include a 12-Megapixel imaging sensor, 10x optical SCHNEIDER-KREUZNACH VARIOGON lens with Optical Image Stabilization, 1280x720 HD movie mode, Kodak's Smart Capture and Full Manual settings, just to name a few. As you have come to expect from a Kodak, there are a variety of scene modes, Perfect Touch Technology and of course the "Share" button.

Although the Z950 is not the smallest camera out there, it is rather compact for a camera that features such a large lens and 3-inch LCD screen. To make one-handed shooting easy, there are rubber pads on the front and back of the grip on the right side. While holding the camera this way, you have the ability to aim and set the zoom with no problems. People with larger hands will also be able to reach the flash and self-timer buttons located to the left of the shutter release. The back is very simple and your thumb is clear of all buttons while you are shooting. The large 3-inch LCD screen features 5 levels of brightness so you will have no trouble seeing it in any lighting condition, including direct sunlight. The LCD is the option for framing your images, as there is no optical viewfinder or EVF (Electronic ViewFinder) like that found on the Z980.

Performance from the Z950 is good in terms of turning on and shutter lag. Turning on it takes 3.3 seconds before it is able to capture its first image. When the camera is pre-focused, the shutter lag is less than 1/10 of a second and a very quick 2/10 to 3/10 of a second when allowing the autofocus to run. When it comes to the shot to shot performance, the camera is a little on the slow side. Without the flash I was able to capture 5 images in 17.8 seconds which is only 0.19fps. The first 3 images, however, were captured in just 3.8 seconds (0.79fps) before the buffer slowed them down to roughly 1 image every 7 seconds. I had almost identical results when using the flash. The first 3 images were captured in 3.8 seconds and the 5 total images were captured in 18.3 seconds. As far as burst modes, you can only capture 3 images at a time, either the first 3 or last 3 of the sequence. These three images are captured in just 1.3 seconds. All of our tests were completed using a Lexar Pro Class 8 (133x) 8GB SDHC memory card, Program mode, Flash Off, ISO Auto and all other settings at the factory defaults. Times may vary depending on lighting conditions, camera settings, media, etc.

The image quality from our outdoor images is OK. When shooting in direct sunlight, we did see some slight exposure issues as light colored objects come out slightly overexposed. When this occurred, the colors throughout the image were washed out and dull. When the image was exposed properly, the colors were vivid and realistic. Using the 10x optical zoom lens is a pleasure thanks the optical image stabilization. This allows you to capture sharp images in low-light situations that would not be possible with most other cameras. The wide end of the 35-350mm (equivalent) lens works well for landscape and group portrait photography, while the telephoto end will get you very close to your distant objects. Some barrel distortion is noticeable at the wide end of the zoom along with some slight edge softness and chromatic aberrations throughout the zoom range.

Our indoor sample shots produced outstanding color with very good exposures. In our M&M man shots, we did notice that the bottom left corner of our images was soft in all of the samples. This corner also seems to be slightly overexposed while the rest of the image looks great. Another thing shown by these shots is the camera's outstanding ability to keep noise levels low throughout the entire ISO spectrum. When viewing the images at 100%, you start to notice noise at ISO 400, but from there all the way to ISO 1600, the camera produces images that are printable and very low noise for each setting. Assisting you on your indoor shots is the built-in flash that has an excellent range of 17.7ft. at wide angle (ISO 400). This gives you the ability to light shots from across a large room with no problems. The flash had no trouble lighting our M&M man shot at ISO 100 from 7 ft. away at mid-telephoto zoom. It is also controlled flash output nicely in macro mode, providing a well lit candy dish, and really brought out the details in the small fish.

Shooting portraits with the Z950 is a breeze, thanks to the camera's face detection. In well lit situations it quickly picked up and had no trouble tracking the faces within the frame. It did struggle to find the faces when shooting in Night Portrait mode though. Our portrait sample not only shows great exposure thanks to the flash, but also natural skin colors and very smooth skin textures. In the night shot, the ambient light from the long exposure effected our skin tones a bit, which had been white balanced for the flash.

Movie mode allows for the capture of 1280x720 HD videos with sound. Standard VGA and QVGA modes are also available. Our movies produced smooth, low noise video, even when the light started to fade. As you can see in the sample movie, the Continuous AF did have a little trouble at times keeping the subjects in focus. This happened whether shooting through the fence or not. The on-board mic had no problems picking up sounds, and did very well at handling the very loud noises from the cars. It is very sensitive and will pick up backgroud noises, that you might not notice at the time you are recording. To avoid these, be careful where you stand. Try to stay away from AC units, furnaces and if outdoors, try to stay out of the wind. These background noises will be much louder in your movies than they were at the time they were recorded.

Powering the Z950 is a 3.7V, 1150mAh rechargeable Li-Ion battery pack. During the course of my tests, I was able to capture approx. 140 images and a few videos per charge. This is only slightly less than the 180 (CIPA) claimed by Kodak. This is not likely to be enough power for a full day of shooting or even a short weekend so you will want to have a second battery on hand and ready to go at all times. This can be a little difficult since you have to charge the battery inside the camera, but is a must if you plan on long shooting trips.

Bottom Line - Kodak's EasyShare Z950 is an incredibly versatile and easy-to-use digicam. With its 12-Megapixel imaging sensor, 10x optical zoom lens with OIS, auto scene recognition and 720 HD video recording, you'll be hard pressed to find a camera with more high-end features in this price range. Although it was a little slow in our performance tests, the image quality and versatility of the 10x zoom lens make it an excellent camera for shooting in all scenarios. With an MSRP of US $279.95, this camera offers a great value, especially for the family due to the ease of use in auto mode, along with the total control offered by manual mode. Be sure to check out our sample photos page to see for yourself how well this camera performed.