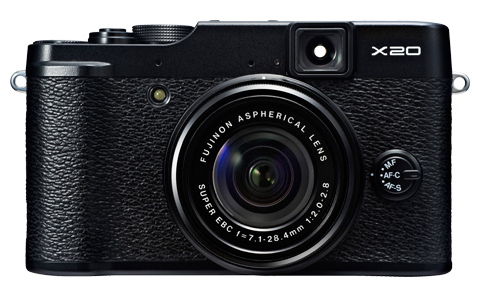 The Fujifilm X20 is the successor to the X10 released last year. Fully upgraded with the new X-Trans CMOS II image sensor and redesigned optical view finder, the X20 has increased performance and image quality over the X10. The 4x optical zoom lens with a maximum aperture of f/2.0-2.8 and great body styling have been carried over from before. In fact, if not for the model being listed on the camera, you would not be able to tell them apart just from looking at them.
It is hard to find a compact camera with as much shooting versatility as the X20. Featuring the new SR+ Auto mode, there is no reason to worry if you would like to just point shoot. On the other hand, the camera gives you total control over every aspect of the camera. There are also some special shooting modes, thanks to the camera's outstanding performance capabilities, that allow the camera to go above and beyond what a single frame is capable of. Some of these modes include the Motion Panorama, "Pro" shooting modes and multi-exposure mode. The power of the camera also allows it to record full 1080p HD video at 60fps with stereo sound.
Fujifilm X20 Features:

The FujiFilm X20 has a suggested retail price of $599.95 USD. To see the most current pricing online, click our Lowest price button at the top right of this page.