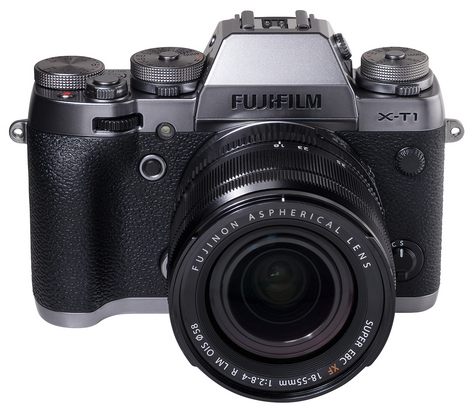 Fujifilm has announced a new Graphite Silver edition of its popular X-T1. Feel free to read that full review HERE to get a sense of how this camera performs because, for the most part, the new Graphite Silver edition is quite similar to the original, featuring the latest generation 16.3MP APS-C X-Trans CMOS II sensor with the segment's fastest autofocus (0.08 seconds), Full 1080p HD Video Recording at up to 60 frames-per-second, built-in WiFi, etc.
However, with the new Graphite Silver edition, you not only get that fancy (and sturdy) paint scheme, but also Natural Live View in the EVF (electronic viewfinder), which allows you to see images as if you were seeing them through your own eyes and not a camera. Further, you can disable Preview Picture effects to help frame shots that you're planning to augment. This new edition is now equipped with a high-speed electronic shutter capable of a maximum 1/32000 speed that can be set in 1/3 steps ("using the FUJINON XF23mmF1.4 R, XF35mmF1.4 R, or the XF56mmF1.2 R lenses"). Finally, the X-T1 Graphite Silver Edition ads 'Classic Chrome' film simulation to its feature set.
All of that, and I'm sure a couple bells and whistles thus far unmentioned, add about $200 to the cost of a standard X-T1.
FUJIFILM X-T1 Graphite Silver Edition Features
**NOT found on the original (black) X-T1
Future Fujifilm X-T1 Graphite Silver Edition Features
(available December, 2014 via firmware)
The Fujifilm X-T1 Graphite Silver edition body will be available in late November (2014) for $1499.95. The current X-T1 black model is already on sale, but this September (2014) there will be a new kit, available in black only, that includes an XF18-135mmF3.5-5.6 R LM OIS WR lens for $1,899.95