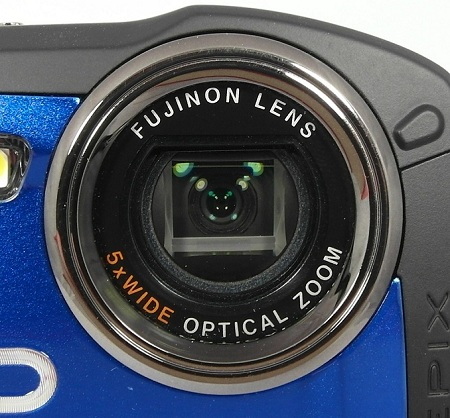 As with most waterproof cameras, the lens on the FinePix XP170 does not extend beyond the body of the camera at any time. The entire lens mechanism is contained inside the lens housing, even when you use the optical zoom feature. You can see the raised area (a silver ring) that surrounds the lens, which helps to protect the front of the lens from scratches.
This Fujinon lens has an aperture of F3.9 - F6.2 at wide angle and F4.9 - F8 at full telephoto. The XP170 offers a 5x optical zoom lens (28 - 140 mm equivalent), which is pretty small compared to most point-n-shoot models on the market. Against other waterproof cameras, the 5x optical zoom is about average. This model does have 15 distinct stops within its zoom range, which is a good feature when you're trying to find the perfect zoom measurement, and it can move through the entire zoom range in a little more than 1 second, which is pretty fast.
The measurements for the TTL AF range for the XP170 are:

The small built-in rectangular flash unit on the XP170 is just to the left of the lens housing (when viewed from the front of the camera). This is not a powerful flash unit, and it has a range of less than 10 feet. As long as you stay in the middle of the range, your photos should turn out OK. If you're too close to the subject, though, you'll see hot spots on the subjects. Washed out photos will occur at times, too. The flash range is:

One aspect of the XP170 that I really dislike is the fact that the flash becomes unavailable any time you run the camera in Silent mode. If you want to use the flash while keeping the camera quiet, you'll have to go through the menu commands individually and mute the shutter volume and operational volume, which takes longer than just activating Silent mode.
The small yellow and white square to the right of the flash is an LED illuminator light. You can turn this light on through the on-screen menus, but it will drain the battery pretty quickly, as it won't turn off until you turn it off through the menus or when power-saving mode kicks in. The LED doesn't work like the flash unit, where the camera activates it automatically when needed. The LED is designed for providing some additional light when you're shooting underwater, but it works well for close-up shots outside of the water, too, and it may work better than the built-in flash for some macro types of shots.

The XP170's top panel buttons are pretty basic. On the far left is the wireless connection button, which allows you to connect to your smartphone to share photos. To its right is the power button. To turn on the camera, you do have to hold down the power button for about half a second. It won't turn on with a quick press, which prevents the FinePix XP170 from being turned on accidentally.
The shutter button is wide and rectangular shaped, which is larger and different than what most cameras offer. To the far right of the top panel is the zoom switch. Press the switch to the left to widen out the angle and press it to the right to zoom in to the scene.
All of these buttons are raised away from the camera a little bit, and they're a good size and easy to use. It does take a little while to get used to having to hold down the power button to turn on the camera.

Just looking at the back of the FinePix XP170, you might think the LCD seems a little small. Your first impression is right, as the LCD only measures 2.7 inches diagonally, and it only offers 230,000 pixels of resolution. Both of these numbers are average to below average in today's point-n-shoot camera market.
Glare isn't a significant problem when shooting outdoors with this LCD screen, and you can counteract any glare by selecting from one of 11 LCD brightness settings.
On the right side of the back panel, you'll find the control buttons for the FinePix XP170. The sturdy bracket on the right side allows you to connect a float to the camera. It also makes the camera a little easier to hold, which is nice when using it underwater.
I thought the buttons were a little too small to be used comfortably. They're raised away from the camera body a little bit, but not enough to make them comfortable to use. In addition, the labels for the silver buttons seem to be etched onto the buttons, which makes the labels difficult to see at times, as is obvious from this photo. Labels with more contrast, such as with the Disp/Back button, would be much easier to see.
The movie button (marked with a red dot) is at the top of the controls, allowing you to start and stop movie recording. This button is the only one that's not raised away from the camera body.
With the four-way button, you can set the following features, starting at the top and going clockwise:
The Menu/OK button is in the middle of the four-way button, and it opens the on-screen menus and allows you to select commands.
The Playback button is at the bottom left of this photo, allowing you to see the images that are stored on the memory card or in internal memory. The Disp/Back button lets you control the data that's visible on the screen, while also navigating through the on-screen menus.
The HDMI (left side) and USB (right side) ports are inside the compartment behind the two locking switches. Fujifilm did not include an HDMI cable with this camera.
You can see the SD memory card slot between the HDMI and USB ports.


With the compartment open, you can see the orange o-ring on the inside of the compartment door, which ensures a waterproof seal.
You can use SD, SDHC, or SDXC memory cards with the FinePix XP170. The rechargeable Li-ion battery pack is pretty thin. Fujifilm estimates about 300 photos can be shot on a single charge, and my tests found that number is pretty accurate. However, you will drain the battery pretty quickly if you use the LED illuminator on a regular basis.
It's handy to have a separate battery charger for the XP170, as many low-priced models force you to charge the battery inside the camera. If you purchase a second battery, you can be charging one battery while shooting photos with the other battery. The charger plugs directly into a wall outlet.