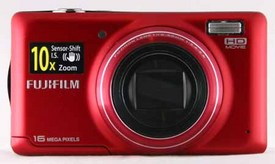 The Finepix T400 is the top model in this series of pocket-sized cameras. This slim model is just 1.1 inch deep with the lens retracted. It offers a 16-megapixel sensor, 10x optical zoom with a 28mm wide angle (equivalent), 3-inch LCD, and high light sensitivity. To combat blurry photos it uses sensor-shift stabilization, and it also records video at up to 1280x720 resolution.

Not all of the specs are as impressive. For example, the aperture range is limited to f3 .4 (wide) to f5.6 (telephoto). Also, macro shooting is inhibited by a minimum focal distance of 1.4 feet at a wide angle, so you can't get really close to small subjects without being out of focus.

Fuji touts this camera as offering dual image stabilization, though in addition to CCD sensor shift, the camera uses a high ISO setting rather than moving optical elements in the lens to minimize blur. Using higher ISO settings introduces digital noise, which can be unattractive. For a basic point-and-shoot camera, the T400 does offer an impressive ISO range of 100-3200. However, you get few manual settings with this camera; you will only be able to set the ISO manually using Program mode. That's because the camera lacks any other manual modes: like aperture-priority, shutter-priority, or full manual. Also, setting the ISO to the highest setting (3200) will reduce the resolution of the image.

Oddly, Program mode is the only shooting mode you'll be using in order to adjust the brightness of the LCD. Otherwise, the brightness of the LCD is adjusted automatically. Another oddity is that the camera does not record audio in movie mode while using optical zoom - the sound simply goes silent. Perhaps because of this, by default the camera instead uses digital zoom while recording video. The result is that video quality suffers - rather than the zoom gliding smoothly it jumps in magnification steps (see video on Sample Photos page) and the video quality deteriorates with each jump. It presents a tradeoff - whether to have audio cut out completely while zooming, or put up with lower-quality video when zoomed in. The only other option would be to preset the desired focal length before recording starts, and cross your fingers that you don't need to use the digital zoom during the recording.

Image quality is good considering that you get a 10x zoom packed into a thin body. But it's easy to expect sharper details and more vivid colors given the 16-megapixel sensor rating. Viewing the T400's images at 100% on a large LED display easily showed its failings. Even in bright afternoon sunlight, wide-angle landscape shots lacked crisp edges on distant trees. Shots taken at 10x zoom looked blurry up close (at 1/300-second shutter speed), with edges and transitions marred by digital noise that looked like a Gaussian blur.

Like I mentioned above, the camera can shoot at ISO settings up to 3200 (with reduced resolution), though in my test shots at ISO 1600, digital noise and chromatic aberrations (color spots) were visible when zoomed in on the camera's 3-inch LCD, despite its 230,000-dot resolution.

To put the image quality in perspective, I compared these shots to those taken with an old 5MP point-and-shoot. Undoubtedly, today's technology is better at analyzing exposure and automatically setting scene modes (just to name a couple of many advances), but just in terms of digital noise in a clear blue sky, the 16MP T400 does not offer less noise - it just creates a bigger file. Having a bigger file is meant to offer you the flexibility to crop a small section of the image and retain good quality (or just make large prints to begin with), but based on what I saw, this is not a flexibility the T400 is able to offer.

This disappointing image quality may never be apparent to the seeming target of this point-and-shoot; one telling feature is that although it does not have WiFi capability, the camera offers a way to mark your photos and videos for later upload to YouTube and Facebook. To do this, however, requires that you use the included MyFinePix Studio software (Windows only). In fact, you may need this software simply to upload your photos to your computer if it does not have a memory card slot. With the camera connected via USB cable, I was unable to drag and drop files on either a Windows Vista PC or a Mac running OS 10.6, much less use my favorite photo organizing software to import the files. I had to either take the SD Card out and use the computer's memory card slot, or install the included software to transfer files via USB (FinePix Viewer for Mac users). This is quite odd, as most all digicams past and present offered Mass Storage behavior when attached to a PC via USB.

The other feature with the same kind of photo sharing appeal is called photo book assist. Very simply, a photo book in the camera is a collection of images like a slideshow, but it is displayed with a book page icon behind it. These photo books can be copied to a computer using the MyFinePix Studio software (Windows only). The best aspect of this feature is the search options. You can select individual photos for a photo book or you can use search criteria such as date, face, favorites rating (one to five stars), scene type (landscape, night, portrait, macro), and upload mark (Facebook). This wealth of search options is very helpful, though it has a couple kinks. The scene type is chosen by camera mode, not any image analysis, so if you take a photo of an object accidentally in Portrait mode, that shot will show up in the portraits search. More troubling was my experience with the facial recognition. For starters, you cannot register a face from an existing photo. You must select the face registration function from the menu and then take a portrait while lining up the subjects eyes with two small yellow rectangles on the screen. Even after following this protocol, however, my searches for two registered faces came up empty - not even including the shot I had taken to register each face.

Given the compact camera body, there is not much room for a built-in flash. Not surprisingly, the small flash was not impressive. Fuji doesn't publish a rated range, but in my shots the illumination fell off drastically at about 10 feet. That's adequate for close shots, but indoor portraits in low light are likely to leave backgrounds to the shadows.

One other feature that definitely relegates this model to bare-bones basic status is its burst modes - or lack thereof. The T400 shoots at a disappointing 1fps at full resolution, and limits you to just three shots. The camera can not use its flash in burst mode, nor does it offer any high-speed burst modes shooting at smaller file sizes. No fun with fast action with this camera.

The controls of the T400 are basic and straightforward. Other then pressing the shutter button with your index finger. All other functions are done with your thumb. There is a dedicated movie recording button, and at the top of the back panel is a rocker button to control the zoom. The four-way control is typical, though the small size of the camera might make some with large thumbs feel cramped. The 3-inch LCD isn't the sharpest, with a most resolution of 230,000 dots; which is adequate, but won't cause excitement when playing back images and videos. In this price range you can find models with a 460,000-dot screen.

Avid snap-shooters should beware that the T400's battery life is a disappointing 160 photos per battery charge. The included charger requires that you charge the battery in-camera, so you can't charge a tired battery while shooting with a backup.

Bottom line - The Fuji FinePix T400 is a good deal if your needs don't go far beyond having a slim and pocketable body. The camera sports a 16MP sensor, but overall image quality is middling and digital noise is quite noticeable at high ISO settings. In addition, the camera lacks burst modes, has a low-resolution LCD, and while recording movies the audio cuts out when you use the zoom. The image search options are enticing, but the search by face feature failed to work in my testing. There's a mark for upload feature, but the camera doesn't have WiFi, nor does it support EyeFi cards - you have to use the included software on a Windows PC and attach the camera via USB.