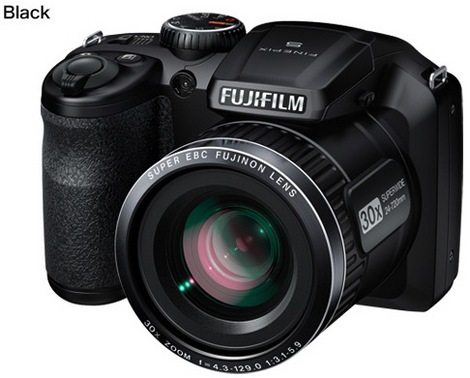 Fujifilm has announced two new long zoom S-Series digital cameras with 30x optical zoom lenses, 16 megapixel image sensors, HD video recording, 3.0-inch LCD displays, full manual exposure controls (P/S/A/M), and the ability to run on four AA batteries.
So then, if so similarly appointed, why does the dSLR-styled FinePix S4800 cost about $20 less than its sibling, the S6800? Simple, the S4800 has a CCD image sensor, which is only capable of recording 720p HD video. The S6800 has a CMOS image sensor, which is capable of higher resolution 1080/60i video and is a little more dynamic in lower lighting conditions.
Fujifilm FinePix S4800 Features
The Fujifilm FinePix S4800 will be available in March (2013) with an MSRP of $229.95. Color choices include black, white, or red.