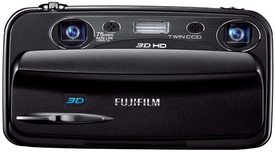 Leading the way in the 3D revolution, Fuji has introduced the REAL 3D W3 point-n-shoot digicam. Sporting 2, 10-Megapixel CCD imaging sensors and 3x optical zoom lenses, Fuji's new REAL PHOTO Processor 3DHD and all of the other common features found on a Fuji Finepix camera, you will soon discover that this camera is not a gimmick but a must have for anyone with a 3D HDTV. Along with its 3D image capture capabilities, the Real 3D W3 can also capture 720p 3DHD video with stereo sound, standard 2D photos and videos, and Fuji has created several specialized shooting modes to take advantage of using two lenses and sensors at the same time with 2D images as well.

While shooting in 3D mode, the camera captures two images from slightly different points of view, approx. the same distance apart as your eyes. These images are saved in the "MPO" (multi-picture) format with the option for each image to also be saved as a JPEG. Then these images are shown to you on a the camera's specially designed LCD screen so that each eye sees a different picture. Now you are seeing the image in the same way that you do without the camera, with two perspectives at the same time. Your brain then puts these two images together allowing you to see depth.

The creativity does not stop with 3D shooting. In 2D shooting mode, the camera operates as a normal digicam with a few special shooting modes that can only be accomplished while using two lenses at the same time. These advanced shooting modes allow you to capture two images simultaneously with one press of the shutter release. First the Tele/Wide mode allows you to capture the same image at both ends of the zoom range, giving you a great overall view of the scene as well as a close-up image of the subject. Second is two color shooting, allowing you to capture two images with different color settings. The third mode is 2-Sensitivity mode. This allows the camera to capture images with different sensitivity settings to create different effects at the same time. All of these modes can be very useful, and you may never say "I wish I had done this" again.

Handling and controlling the W3 is not much different than any other digicam. It is a bit larger than most compact cameras on the market, but this allows for the lenses to be far enough apart for 3D capture. It can be difficult to handle with just one hand, but the "pinch" technique works well. You do have to watch that you keep your fingers clear from the lenses on both sides of the camera, something I struggled with at first. Outside of that there is only one other unfamiliar control on the camera, and that is the Parallax control. This control allows you to "fine-tune" you 3D images by slightly adjusting your lenses until the image becomes clear of Crosstalk or double exposure of your images.

Viewing and framing is accomplished on a specially designed 3.5-inch, 1.15 million dot Lenticular screen. Using microscopic lenses, the screen allows your eyes to each see a different image, giving you the 3D effect. This screen is also incredibly bright and reproduces vivid colors in all lighting conditions, including direct sunlight and low light conditions. Your 3D images can also be seen on a 3D HDTV via an optional HDMI cable, a 3D digital viewer, 3D PC or with Fujifilm 3D prints.

Viewing our outdoor images samples the 3D images on the LCD screen is a pleasure, although it does take your eyes a few seconds to adjust at first. The more you use the camera, the faster your eyes seem to adjust causing the pictures to pop right out at you. Unfortunately the 2D JPEG images are not as exciting to look at. Although the camera produces excellent exposures and has good color reproduction, the images show a lot of noise at all ISO settings and this causes a lot of detail loss to an otherwise sharp image. This is very easy to see in any of our samples when viewing them at 100%. The noise softens sharp edges and in some cases, even starts to dull colors a bit. There are also a few slight instances of chromatic aberrations. Zooming in and out on your images with the 3x optical zoom gives you a little freedom, but overall it's not a big change. Keep in mind, this early in the 3D game, it is a wonder that they have included a zoom at all. This adds a lot more for the camera to handle as it has to make sure the camera's two lenses are always in sync.

Our indoor sample images make it very easy to see how much noise is present within each ISO setting. Even at the lowest settings, there are details that we are used to seeing, such as the stitching in the flag and the words on the magazines that just are not as clear as they should be. Fortunately there is not a huge difference from ISO 100 to ISO 400, but anything higher quickly becomes unacceptable. Assisting with your indoor and low-light shooting, Fuji has included its Super Intelligent Flash system to assure proper flash output for both the subject and well-lit backgrounds. It also helps to avoid overexposure at close range. Although the small flash has a limited range, it works well with the 3x optical zoom giving you a maximum distance of approx. 10.2 ft. (T) to 11.8 ft. (W) at ISO 800.

Shooting portrait shots with the W3 is just as easy and even more fun. It's face detection works very well, providing good focus, exposure and realistic colors with any faces detected within the frame. You will also see plenty of noise within these images if you are shooting in less-than-perfect light. Unfortunately the camera's face detection software does not work while the camera is in 3D mode. Even without the Face Detection, your portrait shots in 3D mode are amazing to look at on any 3D device.

Along with capturing 3D images, the camera can also capture 720p, 3D HD videos which you can then watch on any 3D HDTV by connecting the camera with an optional HDMI cable. The camera can also capture standard 2D video at 720p and 640x480 and 320x240 resolutions as well. The quality of the videos is decent, they play fairly smooth but they could also be a little sharper. All of these videos include stereo sound captured by the two small microphones built into the front of the camera. These small mics are very sensitive and will pick up the sounds that are closest to the camera, not necessarily what you would like to hear.

Powering the W3 is a 3.6V, 1000 mAh Li-Ion rechargeable battery. Fuji claims that this battery provides enough power to capture up to 150 images on a single charge. This may be true if you only capture images without stopping to look at them. With a fully charged battery, we were only able to capture approx. 50 images and videos before the battery was completely spent. Over the course of our tests, we used three complete charges to capture around 200 images and videos. This is a disappointing battery life, and you will want to have at least one extra battery on hand and ready to go at all times.

Bottom Line - With the second installment of Fuji's REAL 3D cameras, the W3 is a fun and exciting digicam that allows you to capture 3D images and videos and watch them on its high-quality 3.5-inch LCD screen without the need for special glasses. This 10-Megapixel camera has decent image quality and is loaded with plenty of fun features besides 3D. With an MSRP of US $499.95, this is a must have for 3D die-hards or early adopters, however it comes with a hefty price tag.