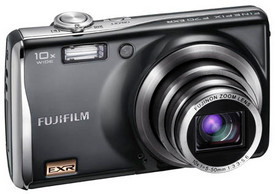 Fuji's FinePix F70 EXR is a compact camera that boasts a list of features that is unmatched by anything else on the market today (as of 10/2009). Featuring Fuji's new Super CCD EXR imaging sensor, a powerful new image processor and a Fujinon 10x optical zoom lens, you will have more power and versatility in the palm of your hand than ever before. The new design of the Super CCD EXR sensor allows the camera to capture more light which reduces noise and allows the camera to capture more realistic colors.

The new processor also allows the F70 to capture several images at a time, that will then be aligned and combined into a single image on the fly. Along with all of these new features, the camera still includes several "Auto" shooting modes (including your typical "Scene" modes) that will allow anyone to pick up the camera and capture excellent quality images in a just about any situation. There is also a manual shooting mode, for your more experienced photographers, as well as a 640x480 movie recording option.

The new Super CCD EXR imaging sensor uses larger pixels and places them closer together and in a new arrangement, allowing the processor to have a higher image resolution without sacrificing image quality due to cramming more, smaller pixels into the same surface area. This also allows the sensor to be more sensitive and produce more lifelike colors in your images. This sensor is also capable of being set to one of three specific modes: Resolution Priority, D-Range Priority and High ISO Low Noise, which can be set by the user or selected automatically by the camera. EXR Auto allows the camera not only to select one of the sensor modes above, but then combines the chosen setting with one of the pre-programmed scene modes, via the cameras Scene Recognition system. The result is the camera will capture the highest quality images possible, without the user having to do anything but point-and-shoot.

This compact model is the worlds smallest to feature a 10x optical zoom lens (as of 10/2009). The lens protrudes from the front when the camera is turned on and then collapses back inside where it is protected by a built-in lens cover while the camera is turned off. The right side of the camera is slightly thicker and designed for very comfortable and easy operation with just one hand. All of the controls are easily accessed, although if you are not careful, it is possible to block the flash with your finger. Framing and viewing your images is done on the 2.7-inch, 230,000 dot, high contrast LCD screen, which we found was very easy to see in almost all lighting conditions.

Performance from the F70 EXR is good for a compact camera in its price range (under $300 US). It is a little slow on the start-up, taking 3.1 seconds before the camera is able to capture its first image. This is partially due to the lens extracting from the body. Shutter lag is less than 1/10 of a second when the camera is pre-focused, and 4/10 of a second when allowing the autofocus system to work. The camera's shot-to-shot delay is 1.7 seconds between frames without the flash and 2.1 seconds when the flash is in use. Shooting in EXR auto mode is much slower, taking 5.3 seconds to capture just 2 images. Continuous shooting allows the camera to capture 3 full resolution images in 1.2 seconds (2.5 fps) or 12 small (2048x1536) images in 2.3 seconds (5.22 fps). Neither of these modes allows you to use the flash. All of our tests were completed using a FujiFilm 1GB SD memory card, Program mode, ISO auto, flash off and all other settings at the factory defaults. All times may vary depending on lighting, camera settings, media, etc.

Our outdoor sample photos show a sharp image with overall excellent exposures and vivid colors. All of our normal outdoor shots where taken using both Program and EXR auto modes, allowing us to compare the special shooting modes of the new sensor and processor. The EXR images have a little more contrast, making the colors really stand out. One thing we did notice with the EXR mode, when it selects D-Range Priority, as it did with our Fire Department shot, the details are easier to see in the shadows, however the darker areas contain a little more noise than we saw in the Program mode photos. This can be seen in both the shadows and the darker parts of the sky.

The 10x optical zoom lens with a 35mm equivalent range of 27-270mm, is incredibly versatile and works very well for capturing vast landscapes on the 27mm wide end, while at the same time you can get considerably closer to your subject when using the 270mm telephoto end. This lens is also one of your greatest tools for setting up the compositions of photographs as it allows you to zoom out to include more of a background behind your subject or zoom in to remove distractions. Throughout this zoom range, the lens does a good job of producing a clear image, with only slight instances of aberrations/ghosting in some of the high-contrast areas in our sample shots. You will also see some barrel distortion when shooting with the wide end of the zoom, which is typical for a compact model.

For a camera in this class, the indoor sample shots show outstanding quality at ISO 100. The entire image is clear but a little on the dark side, as the max. shutter speed in Program mode was not long enough for a proper exposure. At ISO 200, small amounts of noise start to become noticeable when viewing the image 100%. At the same time, some of the fine details, such as the flag stitching, start to disappear. At ISO 800 is when you will have to start worrying about noise showing up in prints 8x10 and smaller. Although the camera features ISO settings up 12800, which is normally only found on dSLRs, the higher ISO images are incredibly noisy and are unacceptable for printing. This is a bit disappointing since Fuji has really been pushing the High ISO capabilities of their new EXR sensor/processor combo.

Assisting you while shooting indoors or any other low-light situations, is Fuji's next generation, Super Intelligent Flash. With a range of up to 13.8ft. (w) at ISO 800, the flash has a descent range for a compact camera. It came up a little short on power in our M&M man shot from 5ft. away, mid-telephoto, at ISO 100. This range will increase quickly though as you raise the sensitivity. One of the big features of the flash is its ability to correctly light the entire scene, including the background, as long as it is within the flash's range. This provides you with a much more realistic image than a bright subject and dark background. Our sample macro shot shows that the flash has been controlled very well from the short distance, but the lens does slightly block the bottom left corner of the image.

Shooting portraits with the F70 EXR is very easy thanks to the camera's Portrait scene mode and Face Detection feature. Once a face has been found, all of the camera's settings are adjusted to make sure the face is properly exposed. If more faces are found inside the frame, one of them is selected as the "main" face, then the camera does its best to assure the other faces are also exposed as well as possible. You will know which face the camera selects as the target face as it will be surrounded by a green box; all other faces will be surrounded by a white box. By pressing the Face Detection button while in playback mode, the camera will show you all of the faces that were detected in the image. If you continue to show you close-ups of each face individually. With the new processor, the F70 EXR is capable of a scene mode called Pro-Focus. This mode snaps several images quickly, one with a sharp focus of your subject and one or more out-of-focus, then combines them to create a depth-of-field effect that most compact digicams are not capable of. Our sample shows that the camera tends to use a higher ISO in this mode. This sample also shows that the camera's ability to distinguish between your subject and the background is very good, but not perfect.

The camera also features several other unique shooting/bracketing modes that assist you in your creative photography. Pro Low Light mode takes several photographs and combines them into a single image with lower noise than the originals. There are also bracketing modes for Exposure, Dynamic Range and Film simulation that allow you to capture several similar images at once without spending time constantly changing the camera's settings. There is a hidden drawback to shooting with these aforementioned shooting modes. These modes will not capture full 10-Megapixel images, instead the highest resolution images that these cameras can handle is 5-Megapixels. This is something that is not mentioned when researching the cameras through Fuji's site and is a bit disappointing to figure out in the middle of a shoot. The only time an EXR image will be the full 10-Megapixels is when the Resolution Priority mode is in use.

With all of the powerful and creative features on this camera, movie mode is not one of them. The camera only features basic video recording features with mono audio recording at resolutions of 640x480 and 320x240. There is not even a HD recording mode, which is becoming a standard on consumer digicams. One of the things that does not disappoint is the video quality, which provide smooth playback and very vivid colors. You are also given the ability to use the full 10x optical zoom while you are recording. This feature is not available on most compact digicams. The built-in mic is very sensitive and picks up all sounds around the camera. It will also pick up background noises that you might not even notice at the time. The air handling system of the pool in our sample video is not noticeable when standing on deck, but is overpowering when played back. To help eliminate this, be careful where you record from, staying away from furnaces, air conditioners, and out of the wind if possible when shooting outside.

Powering the FinePix F70 EXR is a 3.7v, 1000mAh rechargeable Li-Ion battery. During our tests, I was able to capture 165 images and several videos on a single charge. This is just a little shy of the 230 that Fuji claims the battery is capable of recording using CIPA standard testing. While the battery life is descent, you might want to have a spare battery if you plan on full days of shooting or a vacation. With the included charger, it is easy to keep a second battery charged and on hand at all times.

Bottom Line - The Fuji FinePix F70 EXR is an outstanding compact digicam, loaded with exciting new features and shooting modes. The newly designed 10-Megapixel Super CCD EXR imaging sensor captures excellent, high quality images, while the new image processor allows the camera to combine images on the fly to improve image quality. With several "Auto" shooting modes, including EXR Auto, anyone can pick up this camera and capture fantastic images. Just keep in mind, Many of the EXR Auto mode images will be 5-Megapixels instead of 10. With a MSRP of US $279.95, this is an outstanding new compact digicam that is suitable for anyone looking for a powerful pocket-sized camera.