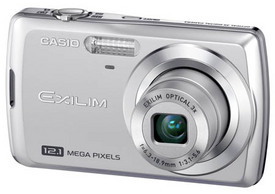 Casio's Exilim EX-Z35 is one of the most basic cameras available on the market. This small, incredibly thin camera features a 12.1-megapixel imaging sensor, 3x optical zoom lens, face detection and several auto and scene shooting modes that allow anyone to use this camera, even in some of the most difficult shooting situations. The camera features a dedicated video record button and is capable of shooting movies with a widescreen format of 848x480, as well as a special setting for capturing movies that will be uploaded to YouTube.
Although the camera is very thin, it can easily be operated with just one or two hands. The few camera controls are well labeled and allow for quick, easy use. You have the option to add shortcuts to the left and right buttons on the 4-way controller that will access several of the camera's most common shooting settings. Framing and viewing your images is done on the 2.5-inch, 230,400 LCD. This LCD is bright enough to be seen in all lighting conditions, although bright and direct sunlight can make it a little difficult.
Performance from the Z35 is ok at best for an entry-level model. The camera is able to capture its first image 3 seconds after pressing the power button. Its shutter lag is approx. 1/10 of a second when the camera is pre-focused and 9/10 of a second when allowing the camera's autofocus to work. In single shot mode, I was able to capture 5 images in 12.5 seconds, giving you a shot-to-shot delay of 2.5 seconds. When you are shooting with the flash the shot-to-shot delay jumps to 3.48 seconds. This camera also features a burst shooting mode that allows you to capture 10 images in 33.8 seconds (0.30fps) with the flash or 10 images in 19.3 seconds (0.52fps) without it. All of our samples were taken using a SanDisk Ultra II 1GB SD memory card, Auto mode, ISO Auto, Flash off and all other settings at the factory defaults unless noted otherwise. All times may vary depending on lighting, camera settings, media, etc.
The image quality of both our indoor and outdoor images is disappointing. While the exposures and colors look good, the images are not sharp. Even at ISO 80 you can see the noticeable amount of noise in the images, which softens and blurs them. It quickly escalates and by ISO 400 it is close to unacceptable. The camera's 3x optical zoom lens with a 35mm equivalent of 35.5-106.5mm is a very standard zoom. While it does not have an extreme wide or telephoto end to it, this range is good for portrait type shots. Assisting you with your low-light shooting situations is a built-in flash with a range of up to 13.8ft. This allows you to use the flash in small to medium sized rooms without any problems.
Portrait photography is very easy thanks to the camera's face detection software. It does a descent job of detecting faces within the frame and following them. Our sample portrait was the best image that we were able to capture with the Z35. It shows a good exposure, realistic colors and skintones, and is the sharpest image that we recorded. Thanks to the red-eye reduction flash there were no signs of redness in the subject's eyes.
Capturing movies on the Z35 is quick and easy thanks to the dedicated video record button on the back of the camera. This allows the camera to always be ready to record, making it a "hybrid" type camera. The movies recorded by the Z35 are a little dull in color but run smoothly. The camera also did an excellent job of keeping moving subjects in focus. Recording the audio for our movie is the camera's small built-in microphone. This mic is very sensitive and will pick up all sounds around the camera, including sounds you might not notice while you are shooting. These sounds include the wind, air conditioners and furnaces. If you careful where you position yourself while recording, you can prevent most of these noises from interrupting your movies.
Powering the Z35 is a 3.7V, 710mAh rechargeable Li-Ion battery. This battery allowed us to capture approx. 150 images and several videos on a single charge without completely draining the battery. This falls right in line with the 200 images that Casio claims the battery is able to supply on a single charge based on CIPA tests. Casio includes an external charger which makes it easy to keep a second battery charged and on hand at all times.
Bottom Line - Casio's Exilim EX-Z35 is a simple compact digicam featuring a 12-megapixel imaging sensor, 3x optical zoom, dedicated video record button and face detection. This camera is incredibly easy to use, with most of the features aimed at beginning photographers. We were not impressed with its performance or image quality, but the feature set is descent for the $109.99 MSRP. You will be able to find better image quality and a very similar set of features with the Canon PowerShot A490 for the same price; it's just a bit larger.