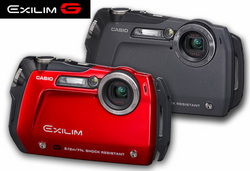 Welcome to durability, my name is EX-G1 and I will be your host. That's what this camera would say if you got invited over, or if cameras could talk. The Casio EX-G1 is the mighty-mini camera for all outdoor enthusiasts, sportsmen or anyone who wants a camera that is as tough as they are. Spring-boarding off of the technology of their G-Shock watches, Casio has given rise to the G1. This lightweight, durable and compact camera has a go-anywhere size and attitude.

The strengths of the G1 are as extreme as its styling, from being submersible to 10ft and freeze proof down to 14ºF, to being dustproof and shock resistant (from up to 7ft check out our test). This camera is locked up tight, with only two compartments that open, and both have a watertight seal. In our testing we found the battery compartment was almost impossible to access. It is a two handed operation that requires the use of an included pry-bar that attaches to the hand strap. I must note that I also had to use a paper clip to slide the tab that unlocks the compartment as well as the provided pry-bar; if you have normal to thick size fingers, you're in for a treat.

I was disappointed at the performance of the timing tests for the G1. As rugged and durable as it is, it is slow. It takes 2.3 seconds for the camera to power up and take the first picture which is fine but when your wanting to take a succession of shots it takes almost double the time. Our tests showed a shot to shot delay of 4.2 seconds without the flash and 4.5 seconds when using the flash. Shutter lag is almost non-existent as it is close to instantaneous whether you are pre-focused or not. The G1 is equipped with two Continuous Shooting modes. Normal CS was a bit unimpressive at 0.3 frames per second. The High Speed CS mode, however, is quite fast at 3.7fps. However, the resolution is decreased to only 2-megapixels, which will still create a nice 4x6-inch print. The cache fills up quickly and will only take 8 images at a time in the High Speed CS mode. All of our tests were completed using a PNI 4GB microSDHC memory card, Auto shooting mode, Auto ISO, flash off and all other settings at the factory defaults. All times may vary depending on lighting, camera settings, media, etc.

The image quality of the G1 is really good. I struggled with how to label its performance because as crisp and focused as they are, images look flat to me. Upon the end of my contemplation, I have to take into account that part of the problem may be due to the current season, which doesn;t offer a lot of contrast outside for a camera to play off of. Looking at the Chinese restaurant that we shoot with all the cameras we test, when compared to the same image taken by Nikon's Coolpix S570, the G1 image has a flat, but truer look to it.

Our indoor shots were equally good. I think anyone would be happy with its performance. We took the camera to a monster truck show and the G1 did pretty good at getting a clean shot of the moving trucks. We also tested the REC light, which is basically a LED flashlight on the front of the camera. You will see by image #284 on the samples page that while it is bright, it is more of an assist light than a single source (the image was shot with the REC light as the only source of illumination). In contrast to that, the next image (#286) was shot with the flash as the only source of light for the entire room.

Recording movies with the G1 was great, the examples we have included on our samples page will attest to that. All the video was shot using the WIDE setting for that wide-screen theater look. This is where all my video would be shot with this camera. There is no zoom capability during recording, but you can preset the focal length before starting.

We had fun putting Casio to the test. We tested both the Shockproof and Waterproof claims of the G1. Both of which are attested to on the samples page. The video of the drop test was from about 5 to 6 ft. (our first test was from the claimed 7 ft, but resulted in the loss of the monitor until I powered it off then back on). We sent the G1 down into the deep seas of my fathers fish tank, testing both the waterproof capabilities and the Interval Image mode (the Interval mode was set to take a picture every 10 seconds for 3 minutes). The images were pretty good and so is the waterproofing but I have to note that when I opened the microSD card compartment, there was a tiny bit of water in the seal. This did not cause any problems so I am sure it only got as far as the seal. We also ran the Interval Movie mode, but the fish were uncooperative and refrained from getting in the act.

Powering the EX-G1 is the NP-80, a 3.7V rechargeable Li-Ion battery. Casio claims that you should be able to get 300 shots and with all the testing time and the plethora of images we took, I would say they are right on.

Bottom Line - The Casio Exilim EX-G1 is a super compact, tough camera. This is one you can stow in a backpack or bag and not worry about. It has features anyone would want in a point-and-shoot model and it takes great pictures. What more could you ask? The G1 has a MSRP of $300 bucks, which is at the higher end for a compact camera, but competitively priced when compared to the other "tough-built" cameras currently on the market. I believe it will be durable enough to be a good investment that will serve its owner well.