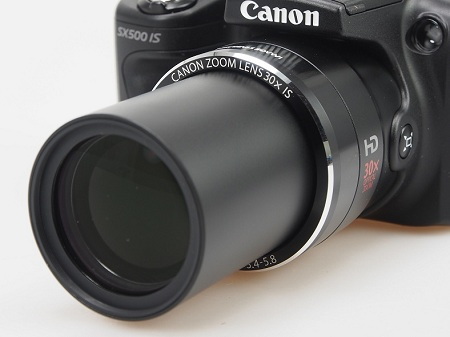 The highlight of the Canon PowerShot SX500 IS isn't hard to see -- actually it might hit you in the face if you aren't paying attention. The 30x optical zoom lens with the SX500 provides powerful telephoto capabilities, covering a 35mm equivalent range of 24mm to 720mm. When placed at the full zoom setting, the lens extends about 2 inches from the camera body. Because the camera's body alone measures a little over 3 inches in thickness, the SX500 is a really thick camera, even though the body itself is smaller than most ultra-zoom cameras.
The zoom motor moves through its zoom range pretty quickly, requiring just a little under 3 seconds -- at least when shooting still images. The zoom motor requires three times as long to move through its range when shooting movies.
Unfortunately, there isn't quite enough of a "hitch" in the zoom motor when you reach the maximum 30x optical zoom measurement, which means that it's easy to move into the digital zoom range inadvertently. This can lead to blurry images versus using the optical zoom alone. If this becomes an ongoing problem for you, you can turn digital zoom off in the menus.
The SX500 IS uses a through the lens autofocus system. You also have the option of making use of a limited manual focus option with this camera.
Focus Range:
On the far right of this image, along the side of the SX500's lens housing, you can see the framing button. When you press and hold the framing button while shooting at the maximum zoom, the camera will temporarily digitally zoom out until you release the framing button. If you've ever had the subject move out of the frame when you're shooting at the maximum zoom, this feature allows you to find the subject again and re-frame the image, all without having to physically move the zoom or take your eyes off the LCD screen, which should save you time.

Canon included a lens cap with the SX500, and it clips securely into place. This is a nice touch on a relatively inexpensive camera.
Having a popup flash unit in a large-zoom camera is almost a must-have feature, as it gives the flash the ability to work at a higher angle to the extended lens. This means that the chances of having a shadow in your flash photos from the lens should be reduced. The flash is centered over the lens, which typically provides the best results in flash photography with a fixed-lens camera.
The flash range with this PowerShot model is pretty impressive at 1.6 to 16 feet in wide-angle mode and 4.6 to 9.8 feet in telephoto mode. The flash can operate in Auto, Flash On, Slow Synchro, and Flash Off modes
The flash must be manually lifted, meaning it will not pop up automatically whenever it's needed. The SX500's on-screen flash controls will not be available to you until you lift the flash upward.
As you can see from this look from above the camera, the PowerShot SX500 IS has a large right-hand grip, which makes it very easy to operate this lightweight model with just one hand. You also can see the closed popup flash unit along the left side of this image.
The shutter button is at the end of the handgrip, and it's surrounded by a zoom ring. This design makes it very comfortable to use this camera.
The power (On/Off) button is clearly marked on the top panel. It's raised a little bit away from the camera body, which makes it easy to press when you're in a hurry.
The mode dial is in the lower right corner of this image, and it provides access to 10 different options.
The SX500 features a 3.0-inch LCD screen, which is a good size. Canon included 461,000 pixels with the display screen, which means that it can display pretty sharp images. This camera's screen does have some problems with glare when you're trying to shoot outdoors in sunlight, but you can increase the SX500's LCD brightness setting to the highest of the five levels to counteract the glare.
The control buttons on the right side of the back of the PowerShot SX500 are pretty standard for a fixed-lens Canon camera. All of the buttons are raised away from the camera a little bit, making it easy to press them. In addition, Canon included a control ring that spins as the four-way button, which makes it easy to use the on-screen menus.
At the top left of this photo, you'll see nine raised circles, which serve as a nice grip for the thumb on your right hand while you're holding the camera. To the right of this grip is the dedicated movie button for starting and stopping video recording (with the red dot).
Just below that area are the exposure control and playback buttons. The exposure control button (marked with a plus/minus icon) only works in more advanced shooting modes. The playback button shows you all of the images stored on the memory card.
To activate the functions on the four-way button, just press the edges of the spinnable control ring. Keep in mind that some functions on the four-way button aren't available in certain shooting modes. The four-way button controls, clockwise from the top, are: ISO, flash, self-timer, and focus type. You can access the SX500 IS's macro focus and manual focus features with the left side of the four-way button.
At the bottom of the control panel are the Disp and Menu buttons. The Disp button works as a toggle and changes what's shown on the screen while you're shooting. The Menu button gives you access to the SX500's on-screen menus.
Canon included HDMI and USB ports on the right side of the camera's body, behind a flexible hinged compartment door that lightly snaps into place. A USB cable is included, however you have to purchase the HDMI cable separately.

Even though the PowerShot SX500 has a large zoom lens, the rest of the camera's body is smaller and lighter than you'd expect it to be. Consequently, Canon chose to include a pretty thin rechargeable battery with this model. The company estimates battery capacity at 195 shots, but my tests showed actually about 70% to 80% of that total, especially if you're using the brightest setting on the LCD to counteract the screen's glare or if you use the zoom motor quite a bit. I'd rather have seen Canon go with a slightly thicker battery that offered more power for a longer battery life.
Canon did include a separate battery charger with this camera, which is a nice option.
Both the memory card slot and the battery slot are contained behind a hard plastic compartment door on the bottom of the camera. This door locks firmly into place with a latch. The SX500 will work with SD, SDHC, or SDXC memory cards.