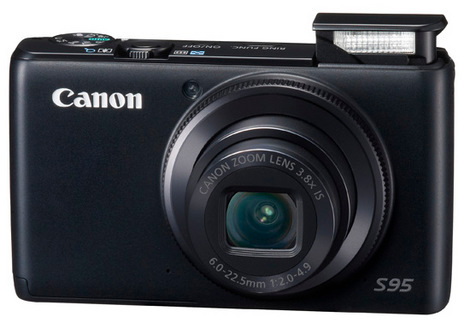 Likely one of the most anticipated Canon point-n-shoot models for 2010 is the PowerShot S95. This unit builds off of the success of the PowerShot S90 from last year, with some exciting new upgrades. While most of the major features and controls have stayed the same (if it ain't broke, don't fix it), Canon has added some interesting enhancements. First off, they've bumped video resolution up to 1280x720 (720p); a feature we all cried for on the S90. Next, they added their all new in-camera HDR scene mode, which captures three photos at difference exposure intervals, then combines them inside the camera to produce an image with increased detail in both highlights and shadows (tripod required).

Lastly, Canon has included their newer Hybrid IS system into the S95, which is the first PowerShot camera to incorporate this new technology. This system helps the S95 compensate for both angular and shift camera shake, which are both prime suspects when it comes to blur found in photos. This stabilization is realized through the use of both an angular sensor as well as an accelerometer. Like the S90, the S95 offers a wide range of custom controls and modes that are not found on most digicams, and is designed to fill the needs of photographers who want a small, yet very capable compact pocket camera.