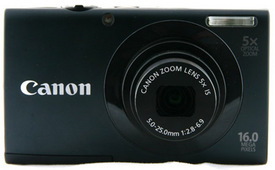 The 16-megapixel A3400 IS is a good value for beginning photographers or those with basic needs. The camera is easy to use and offers a lot of features for a fair price; including high-definition video and a well-designed help system. It captures high-quality images with the help of Smart Auto, which uses 32 predefined scenes to select the appropriate shooting mode. With a wide-angle 5x zoom lens, and high light sensitivity (up to ISO 1600), this somewhat basic camera proves adept at capturing attractive images in most situations. What passes for basic these days is quite sophisticated. To help capture sharp images, the camera also employs optical image stabilization, and in determining focus and exposure employs face recognition.

The most interesting, and potentially attractive, feature on this camera is the 3-inch touch panel LCD. This handy feature makes it easy to navigate some of the menus. In Live View Control shooting mode, you tap the Live icon to launch the shooting modes menu as screen icons. Rather than navigating with the four-way control button, you tap the corresponding icons, which appear four at a time. You also can use the touch screen to reposition the autofocus box and take a picture. During playback, tapping the screen repeatedly will increasingly magnify the image, and zoom in and zoom out icons are offered. While an image is magnified, you can drag it back and forth to inspect it.

One convenient bit of customizing you can do with the touch screen while shooting is adjust three color setting ranges: Dark to Light, Neutral to Vivid, and Cool to Warm. Each of these ranges appear as a line, but you have to tap the plus or minus icon at either end to adjust it--you can't simply slide it. And therein lies the limitations of the touch screen: You can tap the screen to perform basic functions, but when swiping my finger to move a magnified image, for example, the response was sticky. Also, to scroll through my photos, I had to press so hard when swiping my finger on the screen that it was almost exhausting--a very different experience from the light touch required on a typical smart phone.

The resolution of the LCD is 230,000 dots, which is certainly adequate, but you won't get the extremely sharp details found on pricier models with a 460,000-dot resolution screen. The LCD delivers pleasing colors and adequate saturation, though they don't "pop" like more vivid displays. The biggest drawback to this screen is obvious when viewing it in bright sunlight. That is when the touch screen overlay becomes obtrusive - it looks cloudy and makes it more difficult to see images and menu items.

Although this camera can shoot continuously, it lacks a dedicated high-speed burst scene mode. This seems an odd choice as far as menu navigation goes, especially for the beginners this camera is intended for. Instead of having a high-speed burst mode, the manual for this A Series point-and-shoot directs you to use Low Light mode, a not particularly intuitive choice. Low Light mode reduces image resolution to 4-megapixels, and achieves a respectable speed of 3.3 frames per second. At full resolution (16-megapixels), the camera is something of a dog, taking 1.3 seconds in between continuous shots, or just 0.8fps. On a better note, when taking single shots the camera can autofocus and capture a photo in half a second, which isn't tremendously fast, but it's not frustratingly slow.

The high-definition movies recorded by this camera looked sharp, and recording them was easy with the dedicated movie button on the camera's back panel. Video quality was high overall, and I was mostly pleased with the results. Obviously, these 720p videos lacked the extreme sharpness of the 1080p video I shot with the Canon ELPH 110 HS (which I reviewed at the same time), but that is to be expected. What was problematic was using the zoom during video recording. Very soon after engaging the zoom, digital artifacts interfered with the picture quality, enough so that it was noticeable on the camera's small 3-inch screen. The digital distortion is more pronounced on larger screens. The camera's LCD indicates it is using 4x magnification, which clearly is the 4x digital zoom and not the 5x optical zoom.

This PowerShot offers a modest 17 shooting modes, offering most of the mainstays, such as Portrait and Fireworks, and a few fun effects such as Fisheye Effect, Miniature Effect, and Toy Camera Effect. The most important mode for getting a good shot is the sophisticated Smart Auto mode, which uses 32 different scenes in deciding which camera settings to use. You access this mode with the top position on the four-way controller. What this camera lacks is the more extensive and elegant shooting modes offered by pricier models, which can swap colors or create a black-and-white photos with just one highlight color. One convenience it does have is Face Self-Timer mode, which starts the timer once a new face has entered the frame, allowing you take your time when getting out from behind the camera rather than having to dash in the preset 2 or 10 seconds.

I like that the 5x zoom lens on this camera offers a wide angle of 28 mm. This makes it well-suited for capturing broad landscapes and offers more flexibility when in close quarters, enabling you to squeeze more into your frame. The alternative would be to have a more powerful zoom than this camera's 140mm telephoto, which would get you closer to far-off wildlife.

The lens has a maximum aperture of f/2.8 (wide) and f/6.9 (telephoto), which helps it perform well in low light. Aided by optical image stabilization and intelligent IS, this PowerShot can take usable shots up to ISO 1600. When viewed full-screen on a computer screen, the shots I took using a tripod were almost indistinguishable up to ISO 400. At ISO 800, the image showed a slight softening of edges, and at ISO 1600 the edges were softer still, but the difference was minimal at this reduced size. To truly see the differences, you need to view the images at full size, or 100%, which shows only a portion of the image to reveal digital splotches and specks of chroma distortion.

Battery life is nothing to write home about. The camera is rated to take just 180 shots on a single battery charge, so you'll want to be vigilant about charging up the battery. Luckily the battery is charged out of camera in the included AC charger, making it very easy to keep a spare pack or two charged and ready at all times.

Playback offers three viewing options: image only; some information such as date, time and file number; and detailed information including camera settings and histogram. By using the zoom ring you can magnify images. And if you have the touch screen enabled, you can zoom in and out using the appropriate icon.

The slideshow feature offers play times for each image of 3 to 10 seconds, 10 seconds, 15 seconds, and 30 seconds. You have three choices for transitions between images: fade, slide or off. This is typical of this camera's basic offerings, whereby the options are fewer than those of pricier models.

Bottom Line--The PowerShot A3400 IS delivers good performance and high image quality for the price. This basic camera is not extremely fast nor does it offer loads of fancy features, but it delivers the goods for most everyday shooting needs. Its dedicated help button is well-tailored to beginners, as are the touch screen functions. As long as you don't expect the touch screen to perform as elegantly as that on a smart phone, you'll enjoy the convenience of accessing some features with the tap of a fingertip.