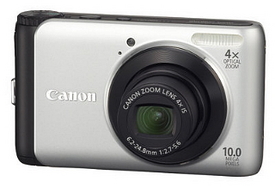 There is a new PowerShot in town, the A3000 IS, a compact, 10-megapixel, 4x optical zoom camera with a 2.7-inch LCD. Sporting a Lithium-Ion battery pack instead of the traditional double A's we believe it is the first of the "A" series to do so. Laden with features the A3000 has Canons patented Image Stabilization, an Auto mode as well as their Easy Mode that that does all the work for you so you truly just point, and shoot. Canon has added some new scene modes such as Super Vivid, Poster Effect and Low Light.

It was great to see the addition of a Li-Ion battery, especially when you consider the price of this camera ($149US). This battery pack helps create a lighter camera that is easy to pocket and take anywhere. Something that bothers me is that the way I normally hold a camera, my thumb is continually encroaching onto the LCD, and my finger keeps covering up the flash. I had to revert to squeezing it from top and bottom to make sure my hand stayed out of the way; also known as the "pinch" technique. On the other side, I like the Mode dial that they chose to use, it lends an air of sophistication to the camera. And although I do prefer it when the zoom is a toggle that is wrapped around the shutter release, I have had no difficulties operating the paddle that is on the back. All the controls are big and easy to use, even for my thick fingers.

The Performance tests that we ran the A3000 through showed some decent times; they could be faster, but for the price that this camera retails for, this is a small point to complain about. From power up to taking the first shot the A3000 did it in 2 seconds. The shutter lag was almost non-existent when pre-focused and about 3/10 of a second when including autofocus time. The shot to shot delay was about 2.4 seconds with or without the flash. The A3000 does offer a continuous shot option. Timing for this will vary depending on available light in the room and whether or not you're using flash. For our test we were in a very well lit room and did not use the flash. I got about 1 frame per second for the first ten frames then as the buffer filled up, the camera slowed down sporadically for buffer processing, then would speed back up again.

Image quality for the A3000 has been fantastic. It seems almost unnecessary to separate discussing outdoor shooting performance from indoor performance because my comments might seem redundant, but I will. Now, before I go on, please bare in mind that this camera is 10-megapixles and has a MSRP of $149.99US, which makes it one of the least expensive cameras we have reviewed recently. Saying that, this camera produced incredible pictures no matter where the location. You will see in our samples page the outdoor shots were crisp, clean and vivid. The cannon shot, which is very muted this time of year due to the snow, was beautiful. The cannon stands out from the snow and the colors in the flag just seem to pop. The restaurant shows the cameras ability to manage colors, the reds are deep and the yellows stand out. The only complaint I would have is that the camera does not have a setting to handle backlight situations, and as a result does not manage it very well. There were small amounts of chromatic aberrations, but they are so minute that it hardly bears mention. As a side comment, I included image IMG_0199 because I was impressed at how clear the grey car came out. The A3000 did an excellent job of capturing the moving vehicle.

As I stated above, the indoor quality could be summed up in one word: "Ditto." But, that would hardly be serving our readers properly. When looking at our indoor image samples, you will see that you get crisp images, clean lines and "real" colors. The A3000 has ISO settings up to 1600 with stronger noise levels showing up around the ISO 800 setting. However, even in saying that, most all of the text that appears in the image is legible when viewing at 100%. I think that pictures captured at even ISO 1600 would translate into great 4x6 or 5x7 prints, as long as there is plenty of light. The macro setting works excellent as you can see by the candy shot. Also a "real world" example of the macro mode is the picture taken of the dog's nose, the detail is awesome.

The A3000 does have scene modes that deserve a quick mention: Face detection self-timer, which detects faces in a group shot, then will release the shutter when a new face is detected. This is an alternative to using the normal timer when the photographer wants to get in the picture. Super Vivid is just that, it really pumps up the colors in a scene, just take a look at the sample image of the restaurant. Lastly, Poster Effect is a fun, artistic way to interpret a scene. The camera also has Auto and Easy modes to simplify picture taking.

Capturing video on the Canon A3000 was as good as could be hoped for. Indoors and out the camera did a splendid job. The options for movie clips is limited to 640x480 or 320x240 and both settings using 30fps. The optical zoom must be preset before recording as it cannot be used during recording, however, the digital zoom can; just be aware that it can degrade image quality. The microphone was surprisingly effective as you can hear in the sample movie. I was amazed at how well it picked up distant voices.

For the first time in our recollection, Canon has produced an "A" series point-and-shoot without the use of NiMH or alkaline AA power plants. The A3000 bucks the AA battery tradition for a lighter, more powerful Li-Ion battery. Canon claims you can get approximately 230 shots on a full charge. Our testing was definitely in that ball park when you add in the time spent in playback mode, and playing with menu/function settings.

Bottom Line - The Canon PowerShot A3000 IS is a very appealing entry-level camera. It's light and easy to carry, has a program mode for anyone who likes to have more control over the functions as well as full auto or easy shooting modes for folks who just want to take pictures. For those with an artistic flair the Poster Effect or Super Vivid modes will not disappoint. All of this for a suggested retail price of just $150 bucks!